Home » World News » ‘I couldn’t go on the way I was’: ABC radio host lays bare battle with chronic illness

She’s the ABC radio host who is adept at drawing out others’ stories, but in a new memoir, Jacinta Parsons details her own, often harrowing, struggle with Crohn’s disease.

Although she’s long been in the public eye, Parsons says that initially she felt sick about airing such personal matters in the book, called Unseen: The Secret World of Chronic Illness. 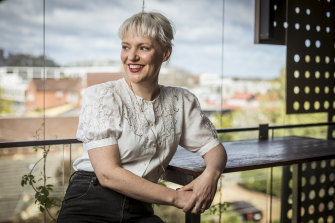 The journey to here: Radio presenter Jacinta Parsons documents her struggle with chronic illness in the memoir “Unseen”.Credit:Chris Hopkins

"A few close friends and writers have read it and have been kind about it, so you start to go, 'OK, it’ll be all right.' "

The book documents Parsons’ rise out of a dark period of her life.

She was diagnosed with Crohn’s disease, an inflammatory bowel disease, at age 22, and by her late 20s was suffering searing pain and internal fissures, was passing blood and had to have frequent operations.

To allow her lower organs to heal, she had an ileostomy procedure – a diversion of the small intestine, through a hole cut in the skin, for waste to pass into a bag. 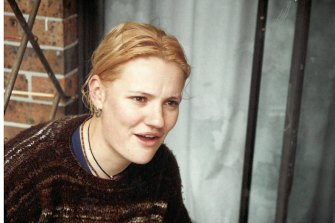 Jacinta Parsons, aged 20, in 1995, before her Crohn’s disease diagnosis.

One night she and her partner, AJ, went to see a band, but the ileostomy bag burst.

Parsons was unable to study or work and had to move in with her parents with AJ. The bag sometimes burst in bed.

"I remember feeling so lost and de-identified with the life I had before," she says now.

"Everything was gone, my potential study, living independently, and I just felt useless."

Parsons became pregnant and weeks after the birth of her daughter (now 16) realised she had to change, or go under. She resolved to stop letting fear rule, to accept her illness and ask, "What will I do now?"

She pursued a dream to get into radio, via volunteer shifts at Triple R, which led to paid shifts there and at the ABC, culminating in 2018 with what became two years co-hosting the breakfast slot on ABC Radio Melbourne.

Parsons had a second child, a boy, eight years ago.

Her ileostomy had been reversed, but she says that early in her breakfast stint she still suffered severe pain, nausea and fatigue.

Parsons is now ABC Afternoons presenter. She has better medication for her condition and feels 80 per cent well, although symptoms can flare up.

She is proud of the book, and her achievements.

It was "a really hard time, and so challenging", but who she is now is "absolutely as a direct result of all of that time".

She sees parallels between COVID-19 and Crohn’s – both have no cure and can have severe symptoms and life-threatening complications.

"Things changing rapidly, not being able to do things or see people. Being stuck at home. I was just like, wow," says Parsons.

The book launch, hosted by Readings, will be held on Zoom on October 6 at 8pm, with Parsons in conversation with Julia Zemiro. The event is free but bookings are required at readings.com.au/events.