Home » ‘I saw nobody for a long, long time’: Veterans and families mark COVID-safe Anzac Day

It was 77 years on Saturday that Bill Craig sailed with the 7th Battalion for New Guinea.

He was 19 years old – younger than most aboard the Duntroon that morning – and his head was swimming.

“You’d seen all these horror pictures of the Kokoda Trail and all that business,” he said from his room at Vasey RSL Care in Brighton East.

“Then you see Australia drifting away – drifting, drifting ’til it disappears – and you think: ‘shit’.”

The battalion found its war a year later on the island of Bougainville in the Solomon Sea. Mr Craig, now 96, moved hill to hill through this “wild country” loading mortars to be fired at Japanese positions. 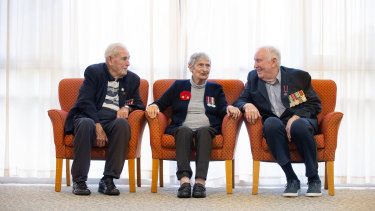 Twenty-five of his battalion were killed and time has claimed most others.

It means he will be one of just two 7th Australian Infantry Battalion WWII veterans attending its annual function among the descendants of other men at Middle Park Bowling Club on Anzac Day afternoon.

The morning will be spent in the courtyard at Vasey Brighton East, whose near-130 residents – almost all of them veterans or war widows – put on their own service each year with staff and families.

This year will be particularly special for residents after Melbourne’s COVID-19 lockdown shielded them from everyone but masked-and-gloved staff.

“I saw nobody for a long, long time,” Mr Craig said. “But that’s something you learn in the army. When it got dark in the jungle and you’re in your dugout, or whatever it is, you can’t just go walking down Swanston Street.”

His 7th Battalion captured 25 enemy positions in little more than two months in 1945 and, per the Australian War Memorial’s history, “dominated the Japanese”.

“We didn’t do a lot, but it was a lot for these poor fellas,” he said.

Geoff Williams, who served with both the Army and Navy between 1954 and 1963, lives a couple doors down. 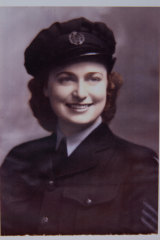 Peg Utting was in the first 26-strong intake of the Women’s Auxiliary Australian Air Force in 1941Credit:Simon Schluter

“For the last few years marching has felt a bit too much,” he said.

“But we’ll dress up here … you’d pay a million dollars to get in here if you weren’t a serviceman or had help from the DVA [Department of Veterans’ Affairs].”

Peg Utting, 98 years old and a great-grandmother of 18, lives on the opposite side of the hall.

She was among the first 26-strong intake for the Women’s Auxiliary Australian Air Force when it launched in early 1941 to fill roles at home while the men went north or overseas.

Ms Utting typed and patched messages – most of it in code – to bases around Australia.

“I loved it all,” she said. “I was just wanting to do anything that was necessary.”

She was also featured on the RAAF “wanted urgently” poster calling on other women to join.

They felt they were contributing, she said, but the gruelling hours led many of the members to breakdowns.

Ms Utting has rarely marched in the Anzac Day parades. The WAAAF unit never organised itself post-war like the returning men.

“They did start having girls marching but, I don’t know, there weren’t very many of them,” she said.

“I could never find anyone to march with.

“[But] I’ve never missed watching or listening to the Anzac Day marches. They just look so proud. They just fill me with – I don’t know what the feeling is – maybe belonging. It’s a sacred day.”

Buttigieg IS ahead in Iowa caucus results as Democrats FINALLY votes