Home » World News » ‘I’m going to give it a crack’: Lawyer Jennifer Holdstock plays to win

Jennifer Holdstock knew she would make waves at Hawthorn Football Club by fighting for a seat on the board, but even after 20 years on the rugged playing field of the law, she did not expect the pressure to drop her bid would be this great.

“What I’ve been through has surprised me, and I’m a really straight shooter,” says the “one-eyed, brainwashed Hawks nut”. 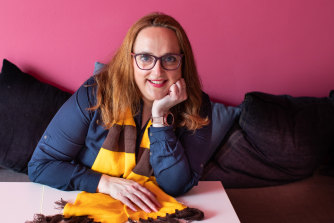 “Just the constant phone calls – from everybody.”

She has tried three times in the past decade to negotiate a path into the club hierarchy and was told “not to bother”. She was ready to go the long way via committees or other voluntary roles but nothing ongoing was forthcoming.

Board members who have been hand-picked, not had to run for election, have advised her to withdraw. Members of factions and other powerful figures have approached her constantly in the four weeks since she nominated, telling her to spare the club its first board election in 10 years.

But Ms Holdstock is not for turning. The club, she says, is “part of the fibre of my being and that’s never going to change”. 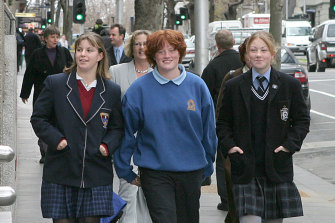 Ms Holdstock (in a pale grey suit) walks into VCAT behind teenagers Helen Taylor, Emily Stanyer and Penny Cula-Reid, who she represented in 2003 when they took on Football Victoria to fight for their right to play.Credit:The Age

The principal of law firm Holdstock Law remains among a field of three vying for two seats on the board. Her opponents are current director Tim Shearer – backed this week by club president Jeff Kennett – and former Australian Super boss Ian Silk, the chosen candidate of the Hawks for Change group.

Voting in the Hawthorn board election opened on Friday and the two successful candidates will be announced on December 14.

After her three previous tilts, Ms Holdstock says she is determined to exercise her right to run, not to prove a point but coming from a passionately brown and gold family, love of the club “is in my veins”.

Her 96-year-old grandmother, Claire, who died two weeks ago “was known, even in her nineties to ring the Channel 7 switchboard late at night to complain they cut the coverage off before she saw the boys sing the song in the clubrooms”.

‘If I had done a deal now, I’d have let my grandmother down, myself down and I would have let my five nieces and nephews down.’

“I’m probably not going to win, not the first time. But I’m going to give it a crack.”

Ms Holdstock has been a passionate advocate for women’s right to engage in the game, and gave her time to represent three teenaged girls in sex discrimination case they took in 2003 after being told mid-season that they could no longer play in their mixed team in the Moorabbin Saints Junior Football League due to their ages.

“Football Victoria fought that case so hard. They put up such a vicious fight to these three teenaged girls, and now we’ve got the AFLW competition and AusKick is all about boys and girls, it’s fantastic. What has changed in 18 years is almost beyond comprehension.” 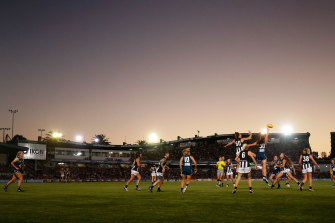 Collingwood v Carlton hit out during the first AFLW game in 2017 at Ikon Park, a sight that brought Jennifer Holdstock to tears.Credit:Getty Images

One of the girls played in the first game of the AFLW competition. Sitting at home – Ms Holdstock couldn’t be at the game after having two wisdom teeth out – “when the first girl kicked the first goal, I just burst into tears”.

Hawthorn will have an AFLW team for the first time next season. Getting a third woman onto the nine-person board would, Ms Holdstock says, “help send a message from board level that your interests are going to be thought of here, acknowledged … we’re here and we’re listening”.

Though she believes her chance of succeeding is limited, Ms Holdstock has been touched by the support she is receiving from other Hawthorn members via messages on platforms such as LinkedIn.

“The number of approaches I’ve had saying, ‘I’m a Hawk and I’ve tried and I also had the door shut, and I can’t believe you’re doing this – you go girl’ … I did an interview on SEN and one of them was listening and messaging me at the same time saying ‘You’re doing what I wish I could have done’,” she says.