Home » World News » In a deeply divided America, future looks dark if the other side wins the election

Washington: A psychiatrist examining what's happened to America's soul chooses for his book cover the iconic image from Planet of the Apes – a charred, half-buried wreck of the Statue of Liberty.

A minister who believes America is God's chosen nation decides that a Joe Biden victory would mean doom, a crushing of the nation's essence. 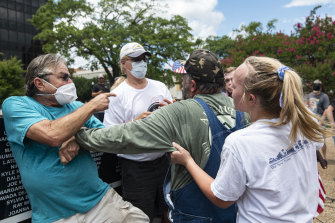 And a filmmaker whose work has celebrated the raucous mess of American politics concludes that the re-election of President Donald Trump would be "the end of democracy".

One week before Americans choose their path forward, the quadrennial crossroads reeks of despair. In almost every generation, politicians pose certain elections as the most important of their time. But the 2020 vote takes place with the country in a historically dark mood – low on hope, running on spiritual empty, convinced that the wrong outcome will bring disaster.

"I've never seen anything like it," said Frank Luntz, a Republican political consultant who has been convening focus groups of undecided voters for seven presidential cycles. "Even the most balanced, mainstream people are talking about this election in language that is more caffeinated and cataclysmic than anything I've ever heard. 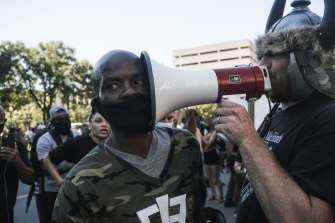 Opposing demonstrators clash outside of the Louisville Court House in Kentucky, US, on September 5.Credit:Bloomberg

There's a long history of lurid foreboding in American politics. Among the nation's founders were pamphleteers who made their names decrying the dire future the colonists faced if their revolution failed. But the current language is so apocalyptic that even those who are steeped in the country's episodes of extreme rhetoric are alarmed.

"I didn't take it seriously for a long time, but in the last six weeks, it's become very concerning," said Michael Barkun, a political scientist at Syracuse University who studies political extremism. "This idea that the other side winning the election will produce a precipitous decline and the disintegration of institutions is completely at variance with American history."

Historians say that in past bouts of insecurity and self-doubt, Americans often focused on foreign threats – the ideological battle with the Soviet Union during the Cold War, the worry over unrest in the Middle East after the September 11, 2001 terrorist attacks.

But now, the worry on the right that a Democratic win will plunge the nation into catastrophic socialism and the fear on the left that a Trump victory will produce a turn toward totalitarianism has created "a perilous moment – the idea that if the other side wins, we're in for it," said Peter Stearns, a historian of emotions at George Mason University. 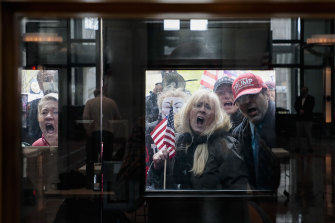 "Why are some people joining into causes and movements? Why are they finding some credence in things like QAnon?" Amedia asked. "They're trying to fill a void. In this season of anxiety, people want something that's beyond this feeling of loss of control. Our house is out of control – our presidency, our Congress, the virus. People want leadership that's fair and open. Why must we choose between right and left? Why can't we be for both black justice and right-to-life? Why can't we accept the science and the faith?"

The pastor plans to continue his Potus Shield prayers for the President whether Trump or Biden wins.

"That's what we're supposed to do as Americans," he said. "In my church, we accept the results whatever they are, and we're going to be the voice that brings the unity. Sometimes, when things have gotten a little too easy, people need to get put into a little bit of a pressure cooker to discover what their real values are. Maybe that's where we are. How can we heal the wound with respect for each other?"

Four years ago, RJ Cutler, a documentary filmmaker who focused on American political culture in The War Room and A Perfect Candidate, said the country was heading into a time "when any bad thing seems possible, when we no longer know the ground rules about the weather, about democracy, about very basic things".

The reality of Trump's presidency has been worse than he anticipated, Cutler says now, and he is certain that a second term would be a disaster.

"I'm one of those people that believes it's the end of democracy and we're in for a totalitarian state," he said. Trump "wants his cultural enemies silenced. He wants to control communication. The culture will fight back, but this guy's going to put people in prison. To quote my mother, 'Good luck to us.' "

Cutler's view represents not only the perspective of an artist who lives in liberal Los Angeles, but a broader swath of left-of-centre Americans who believe Trump's re-election would threaten the stability of the government, the future of the electoral system and even the fate of the Earth.

Many on the left experience what social scientists call "extinction anxiety," the belief that, as Barkun put it, "society as we know it is going to be destroyed and Trump will accelerate that because the system has run out of resilience. It's particularly surprising to hear from the left that the system has lost the capacity to absorb Trump's actions."

Whether that anxiety stems from fears about climate change, racial discord, or the way social media platforms funnel users to a diet of ever more extreme political views, the effect is a despair that has only been exacerbated by the isolation and uncertainty resulting from the coronavirus pandemic.

Cutler, who has devoted recent years to making movies about the lives of Saturday Night Live pioneer John Belushi and pop singer Billie Eilish, remains hopeful that if Biden wins, "you're going to see a cultural rebound," a time of creativity and of searching for solutions to long-festering problems.

But even if his side wins, Cutler said it's hard to imagine that the country would simply turn a corner and start fresh. "We've become a stratified culture. There's no longer one truth. I mean, there are people who think California's on fire because we haven't swept the ground."

A post-Trump period could be a "a political and cultural free-for-all," Cutler said, in which some Americans, finally freed from coronavirus restrictions, might fall into "a time of hedonism," while others remain fixated on social divisions that will not disappear quickly.

When Thomas Singer, a psychiatrist in San Francisco, was casting around for a cover picture for his book on what has happened to the soul of America, his view of the country had grown dire.

"Things were falling apart," he said. "Our inner experience, as individuals or groups, on the left or the right, is that there's something very damaged about everything that makes us American. We're shattered."

He stumbled on the famous image at the end of the original 1968 version of Planet of the Apes, the harrowing discovery of the ruined Statue of Liberty sunken into a beach – a haunting symbol of a nation that lost its ideals and collapsed.

"Sometimes art anticipates reality," Singer said. "This was an apocalyptic sense that democracy as we know it will crumble."

But in the time between choosing that image and publishing his book, Singer came to a different conclusion about America in the time of Trump.

The psychiatrist, who is 78, recalls the anguish that the divided country went through in 1968, "this sense that everything was coming apart". Yet as a young man, he said, he and his peers never believed their future was doomed.

Now, however, he hears young people lament that they have no path forward, that the Earth is in fatal decline, that new technologies threaten the future of work.

Though many of the forces contributing to that despair were at work before Trump came along, Singer sees the President as an engine of mistrust.

"He has contributed enormously to this sense that we can't agree on what's real anymore," he said. "He thrives on chaos. He is profoundly rebellious – and that goes to the absolute core of American identity."

That view of Trump as a quintessentially American renegade – one in a series of rebels without a cause – has nudged Singer toward the view that the President is not simply a destructive force or, as Trump sees himself, a disrupter.

Rather, the psychiatrist says Trump, perhaps unwittingly, is giving the country another chance to do what it has always done best – to battle and shout and rage in what the poet Walt Whitman called America's essential characteristic, a "barbaric yawp" of conflict that breeds innovation and renewal.

"The soul of the nation gets forged in that collision of ideas, about race, about money and capitalism, about the individual versus the collective," Singer said.

Populist surges like the one that helped Trump win in 2016 – fuelled by the exasperation of Americans who believed that neither party addressed lost jobs, diminished communities and emptied malls and downtowns – have burned out within a few years, fading away as economic expansion, war or political reform eased people's insecurities.

Singer fears a second Trump term, which he believes would further undermine trust and social cohesion. But now he wonders if the President may have forced the country to confront and maybe resolve some of its deepest problems.

"A leader, like a parent, sets a model for behaviour," Singer said. "Biden is a return to deeply cherished American values of decency and goodwill. Trump has flushed out all of our raw divisions. I'm hopeful that people will find their unruly and chaotic American soul and cry out. The result may be profoundly renewing about race, climate, maybe health care.

"Ultimately, Trump may serve a valuable purpose," he said. "In the human experience, death and rebirth go together."

Our weekly newsletter will deliver expert analysis of the race to the White House from our US correspondent Matthew Knott. Coming soon. Sign up now for The Sydney Morning Herald‘s newsletter here, The Age‘s here, Brisbane Times‘ here and WAtoday‘s here.

Tragic asthma sufferer, 44, told sister she was ‘scared’ before she died of coronavirus – The Sun

Brother of ISIS murder victim believes kidnapping was 'inside job'