Home » In South Korea, a wave of bullying claims unseats stars of sport and music

Seoul: The accusations are anonymous and surface on social media: a range of South Korean celebrities – sports heroes, K-pop stars and actors – engaged in bullying as teenagers or younger.

The dozens of allegations this year have brought some public apologies and derailed careers and endorsement deals. But others named in the allegations are calling out their accusers to come public, vowing to contest the charges in court. 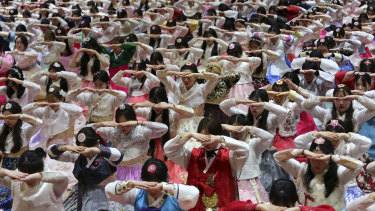 Many accusations date back to school years. South Koreans girls in a graduation and coming-of-age ceremony at Dongmyung Girls’ High School in Seoul South.Credit:AP

The cases share elements of the #MeToo movement and other collective outpourings on social media.

But the veil of anonymity in most South Korean bullying accusations also raises questions over the fairness of accusers hiding behind an online handle. Fearing threats of defamation and public backlash, most accusers anonymously posted the accusations in online forums.

The fallout also reflects a wider cultural reckoning in South Korea. There is overwhelming support for the rights of victims of bullying, which is viewed as a serious problem in the country.

A petition calling for the presidential Blue House to start a “national-level investigation” into physical and mental abuse in sports has garnered more than 150,000 signatures.

Yet some experts also ask whether South Korea’s hypercompetitive society and the pressures it exerts on children should shoulder more of the blame.

The wave of bullying accusations began earlier this year when twins, Lee Jae-yeong and Lee Da-yeong, the stars of the South Korean women’s volleyball team and among the country’s most popular athletes, were accused of using abusive language and threatening teammates as teenagers.

The pair apologised and offered to reach out to the victims of their “wrongful words and actions” but were dropped from the team for the upcoming Tokyo Olympics, as well as from their professional club, Heungkuk Life Insurance Pink Spiders. The twins plan to challenge some of the claims in court, South Korean media reports said. 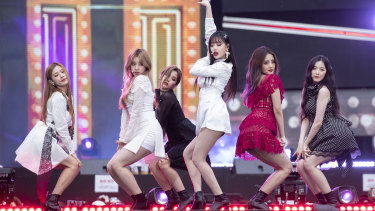 The claims are widespread. A member of South Korean K-Pop girl group (G)I-dle has also been accused. Credit:SIPA USA

Since then, dozens of K-pop stars and actors have faced similar accusations in online forums.

An anonymous post purportedly by two of the Lee twins’ former teammates accused the pair of acts including stealing money from them, repeatedly punching them in the head and threatening them with a knife.

On Instagram, Lee Da-yeong said she would reflect on the “deep trauma” her actions had caused and deeply apologised for her behaviour as a youngster. The national volleyball association suspended the pair indefinitely from international competition.

South Korean sport has been plagued by accusations of violence and toxic behaviour, with coaches allegedly bullying young athletes and sometimes abusing them sexually.

“In the world of Korean sports, violence is part of daily life,” said Park Ju-han, head of education at the Blue Tree Foundation, a nonprofit organisation set up to counter bullying and counsel victims.

“Student athletes are trained with routine beatings by their seniors and coaches,” he added. “When they grow up, there is no question for them to do the same to their underlings.”

An Asian Games-winning boxer also dropped out of the South Korean Olympic squad after being accused in February of physical and sexual abuse during high school, according to national broadcaster KBS. The boxer admitted to the bullying accusations but did not respond to a KBS request for further comments.

A host of other professional athletes in baseball, soccer and basketball also faced bullying accusations in anonymous media interviews and posts on online forums.

Some took responsibility, others are trying to prove their innocence in court. Many of the allegations remain unverified.

Actor Kim Ji-soo, 28, was accused of firing a BB gun from the back seat of a bus, slapping a fellow first-grader in the face and, along with friends, throwing kimchi at others in the school cafeteria during his middle school years.

Kim posted a handwritten apology on Instagram, although his agency denied more serious charges of sexual harassment levelled against him. He has since stepped down from the lead role in a popular television drama.

K-pop singers Hyunjin, from boy band Stray Kids, Soojin of girl band (G) I-dle and Chorong of Apink suspended their media activities after being accused of verbally or physically abusing schoolmates in middle school. None have publicly admitted to any of the claims. 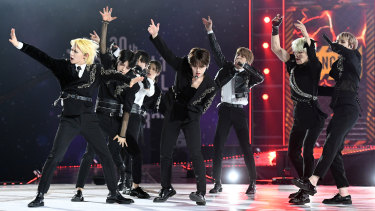 A member of K-pop boy band Stray Kids has been accused of bullying.Credit:Getty

Actress Park Hye-soo, 26, saw the premiere of her K-drama postponed after she was accused of using violence against her classmates in middle and high school.

Han You-kyung, head of the Institute of School Violence Prevention at Ewha Womans University in Seoul, said that surveys do not show bullying is more serious in South Korean schools than in other developed countries. But Han called South Korea “a culture that puts achievement at the centre” and a system that inflicts weak punishments on bullies.

“If these issues had been solved properly at the time, victims would not feel the need to revisit painful memories through public disclosure,” she said, adding that the online reaction shows the South Korean public “views violence as a serious crime that cannot be tolerated or condoned with the excuse of being young.”

“However, we have to ask whether such public shaming helps address the traumatic memory of the victims,” she asked. “In place of a witch hunt, the true solution is bilateral engagement between the perpetrator and the victim to resolve unsettled disputes in a constructive way.”

Supreme Court rules some asylum seekers can be deported without hearing