THIS is the incredible moment an eagle swoops in on "a shark" snatching the fisherman's catch off them.

In a Tiktok video, two men can be seen tugging a little finned creature out of the water when they are disturbed by a hungry bird. 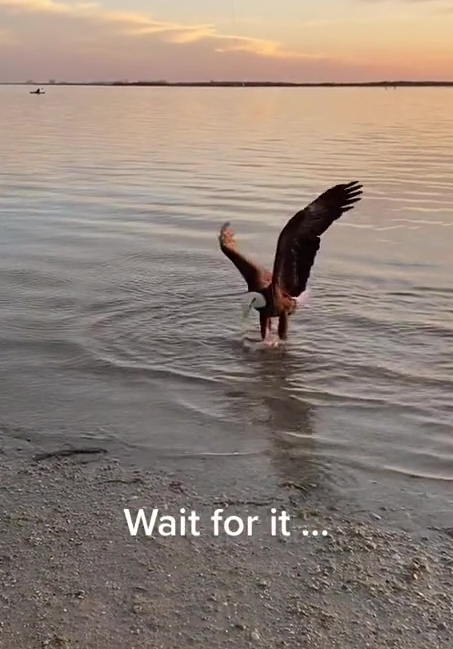 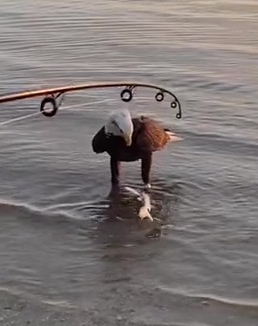 Filmed with some beautiful sunset views at Clearwater Beach, Florida, they try to yank it out of the water.

But before they manage, an "eagle" as they caption it, which some commenters identity as a bald eagle, swoops down on to the shark.

It clamps its claws on to the struggling shark, and stares up at the fishermen menacingly as if denying them any chance of getting their catch back.

TikTokkers took to the comments section to voice their amazement and loved how brazen the eagle was at swiping the fish.

One user said:"And he is just standing there looking at you like: 'What exactly do you think you’re doing? That’s MY dinner?'"

Another said: The eagle is like ‘thanks buddy’, nice catch, now get in my belly!”

“What I want to know is who ended up wit the shark?," another Tiktokker wondered.

It comes as a fisherman reeled in a record-breaking 550lb shark in British waters.

Simon Davidson, 39, fought for an hour when the porbeagle, which was almost 7ft long and 6ft wide, took his bait.

The catch seven miles out from the Devon coast beat the official record of 507lbs – and six people had to hold it down to measure it before throwing it back into the water.

The plumber from Kettering, Northamptonshire, said: "My bait got taken and I didn't think it was a big fish because it hadn't started to fight yet.

"Then I reeled it into the side of the boat and it was a real monster.

"Suddenly it took off through the water and pulled around 600 metres of my line and it was a brutal battle to pull it back in.

"It was an hour of agony. You get to the point where your legs and arms are shaking and you just think your body is going to give up.

"When you saw it in the water, you'd think it was a Great White. It's terrifying to think that sharks as huge as that are prowling our waters."

Simon started as a fresh water angler before moving into big game fishing, and was deliberately looking for big sharks earlier this month.