Cairo: Several thousand Algerians demonstrated in the capital against the military-backed ruling elite, in a rekindling of unrest that led to the resignation of the OPEC nation’s longtime president two years ago.

Chants against the “military state” and “independence, independence” echoed in downtown Algiers after demonstrators overwhelmed police seeking to block access. Monday is the second anniversary of mass protests that came to be known as the Hirak movement. 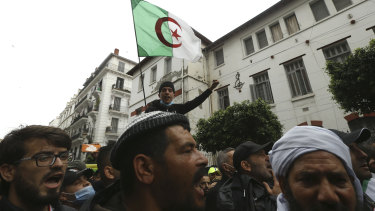 A man holds an Algerian flag while Algerians demonstrate to mark the second anniversary of the Hirak movement.Credit:AP

The resumption of protests came despite efforts by President Abdelmadjid Tebboune to allay discontent over the troubled economy by ordering the dissolving of parliament, freeing of some prisoners and a limited cabinet reshuffle announced late Sunday that included changing the energy minister.

Tebboune in December 2019 succeeded veteran president Abdelaziz Bouteflika in taking the helm of the North African nation that’s dealing with declines in oil and gas exports, its key sources of revenue.

A dearth of foreign investment and reluctance to turn to international debt markets have further constrained the government’s ability to plug the budget deficit and boost social spending. 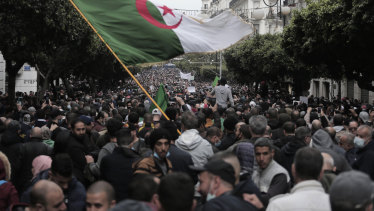 Algerians demonstrate in Algiers to mark the second anniversary of the Hirak movement.Credit:AP

Algeria’s president last week ordered the dissolution of parliament and announced new elections would be held. He subsequently replaced Abdelmajid Attar, who became energy minister in mid-2020, with Mohamed Arkab, who’d held the post for about a year before Attar was appointed.

The changes, along with earlier pledges of reform, have largely been brushed off by the mainly youthful protesters, many of whom are demanding greater job opportunities.

In a Tibetan cave, Australian archaeologists find evidence of a mysterious ancestor