A statue of former President Andrew Jackson that sits outside the White House was vandalized by climate change activists ahead of a planned march on Indigenous People’s Day Monday.

Protesters wrote the words ‘expect us’ at the base of the monument, which is in full view of the White House – though President Joe Biden, who has been in Delaware for the weekend as usual, wasn’t there to see it.

The demonstrations, which kicked off late morning on Monday, are a bid to force Biden to declare a climate emergency ahead of the United Nations Climate Change Conference beginning at the end of October.

Crowds of mostly indigenous activists marched down the streets of DC carrying signs that read ‘Biden Reject Fossil Fuel Projects’ and ‘no pride in genocide’ among others.

Hundreds of people were present, many dressed in traditional Native American garb and signing songs in Indigenous languages. 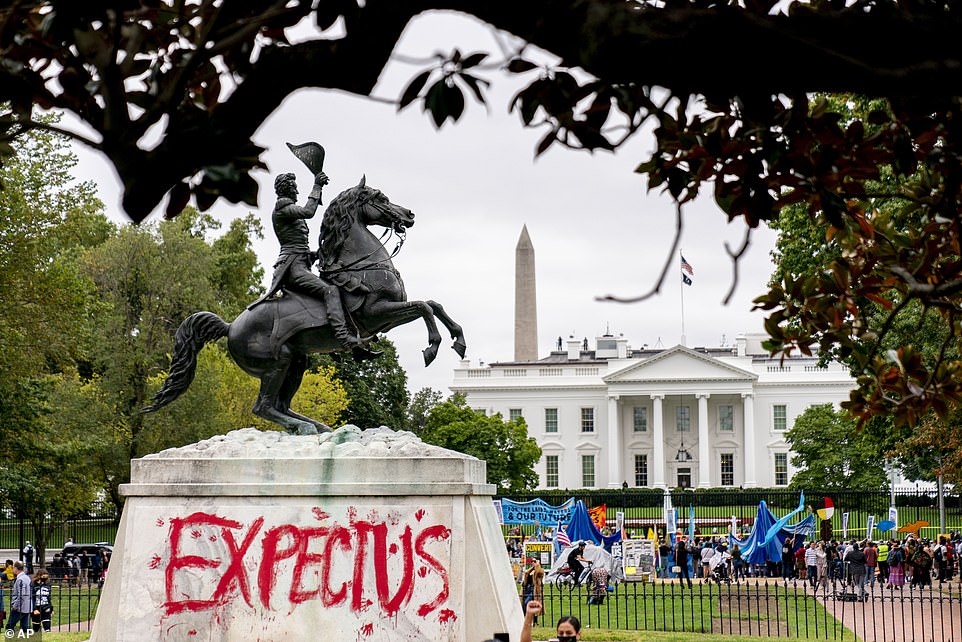 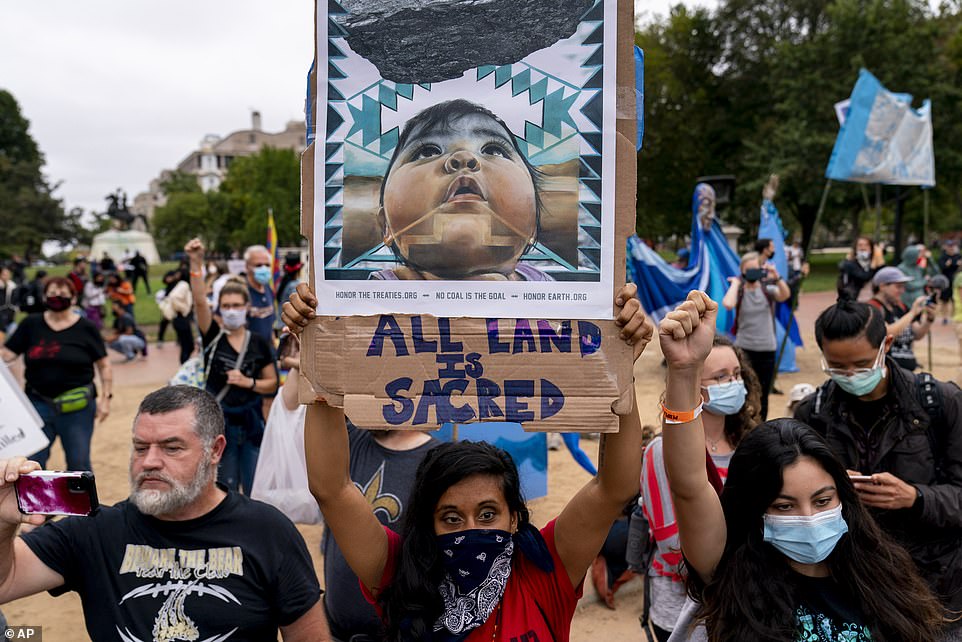 Indigenous and environmental activists protest in front of the White House in Washington, Monday, Oct. 11 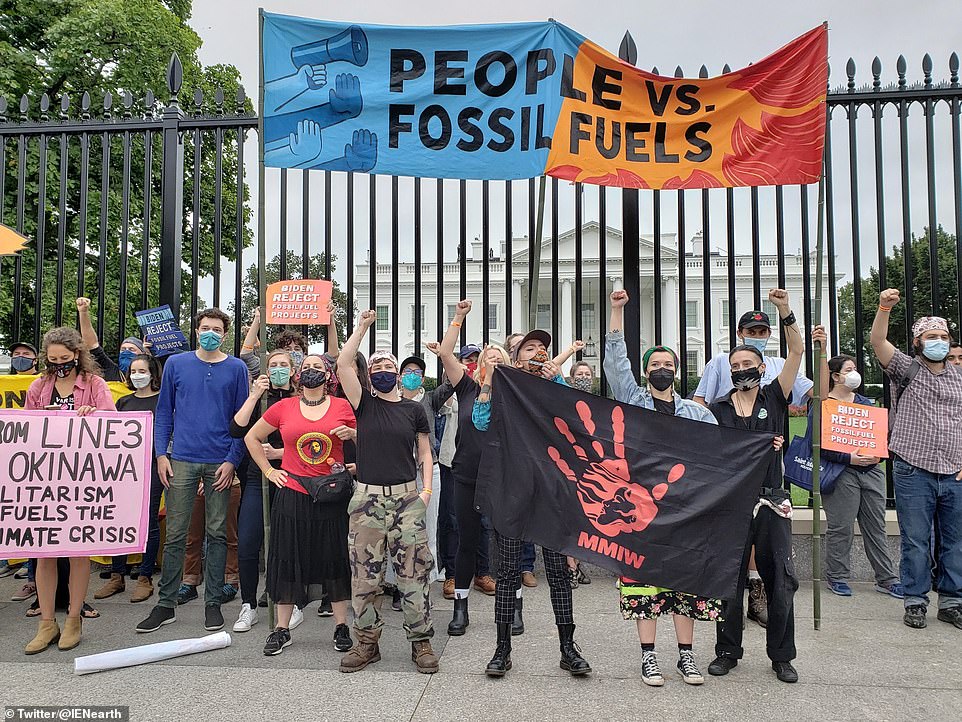 The event was put together by a coalition of environmental groups called People vs. Fossil Fuels

It was just the first of a five-day campaign of demonstrations dubbed People vs. Fossil Fuels.

The event was organized by the Build Back Fossil Free coalition, which is made up of several indigenous and other environmental groups.

One of those groups, the Indigenous Environmental Network, endorsed the Jackson statue’s defacement.

‘President Biden woke up to a message on the Andrew Jackson statue in front of the White House today. On the base of the statue “Expect Us” was written with blood splattered handprints to represent the Missing and Murdered Indigenous Women epidemic all over the statue of the genocidal President,’ a statement released by IEN Monday said.

Biden didn’t wake up to see the statue, however, as he’s been spending the holiday weekend in Delaware with his family. 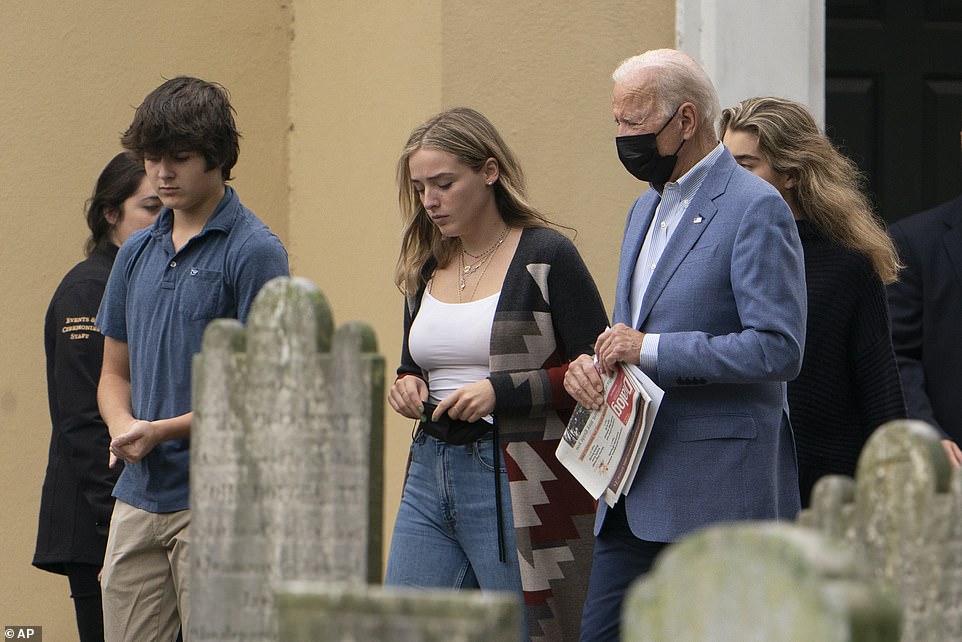 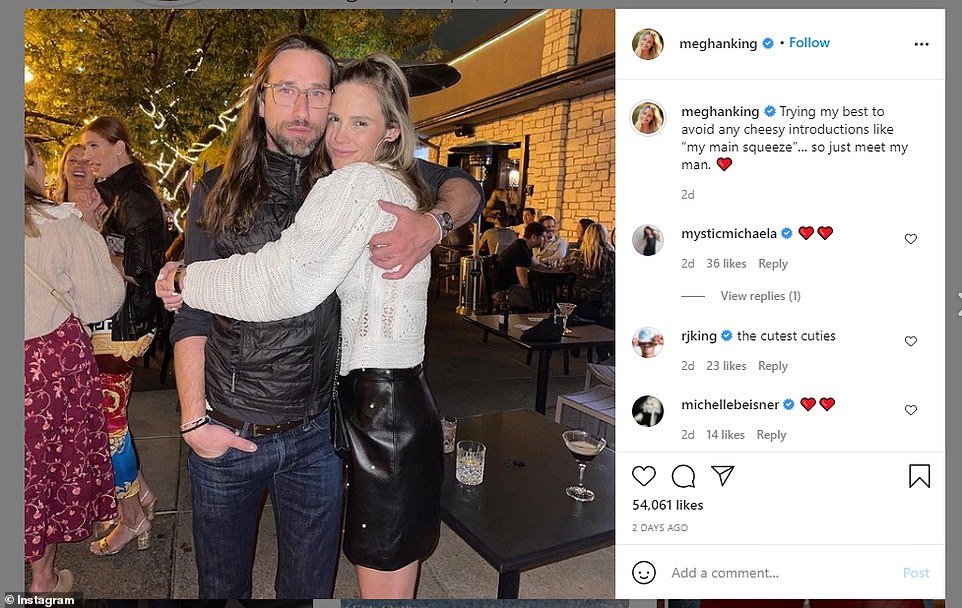 IEN appeared undeterred by Biden’s physical location and shared a statement wishing for the downfall of all ‘colonizers.’

It read, ‘Our people are older than the idea of the United States of America…We are the children of the strong spirits who survived your residential schools, your pipelines and mines, your reservations and relocation, and your forced assimilation and genocide.’

‘We carry the prayers and intentions of our ancestors and are unafraid. Another world is possible, may all colonizers fall.’

Andrew Jackson was the seventh president of the United States whose forced relocation of Native American tribes was known as the Trail of Tears, in which an estimated 4,000 indigenous people died after being pushed out of their ancestral lands.

But it was the current Democrat in office that demonstrators spoke out against on Monday.

‘We expect more from a president who has repeatedly listed climate change as one of his top priorities,’ Greenpeace USA’s Janet Redman said in a statement on the demonstration’s website.

‘President Biden’s lackluster plans continue to embrace the false solutions of carbon capture and storage and other market measures that landed us in this emergency to begin with,’ Su wrote.

‘We need to reject that broken paradigm and instead build a new climate future in a way that combats the country’s inequalities, racism and ecocide.’

Protesters are demanding Biden follow up on his hardline stance against the Keystone XL pipeline by also moving to shut down the Dakota Access Pipeline, the proposed Enbridge Pipeline 3 and phasing out fossil fuel projects.

Biden’s failure to take action on those gas pipelines has been viewed as a disappointment by activists who voted him in in the hopes he would enact serious climate reform.

The demonstrations have been mostly peaceful but reports of violence between protesters and police did appear on social media.

A video of an indigenous woman being handcuffed by Secret Service and other law enforcement was reportedly taken at the protest.

The woman can be seen kneeling on the ground and sobbing while surrounded by multiple officers. 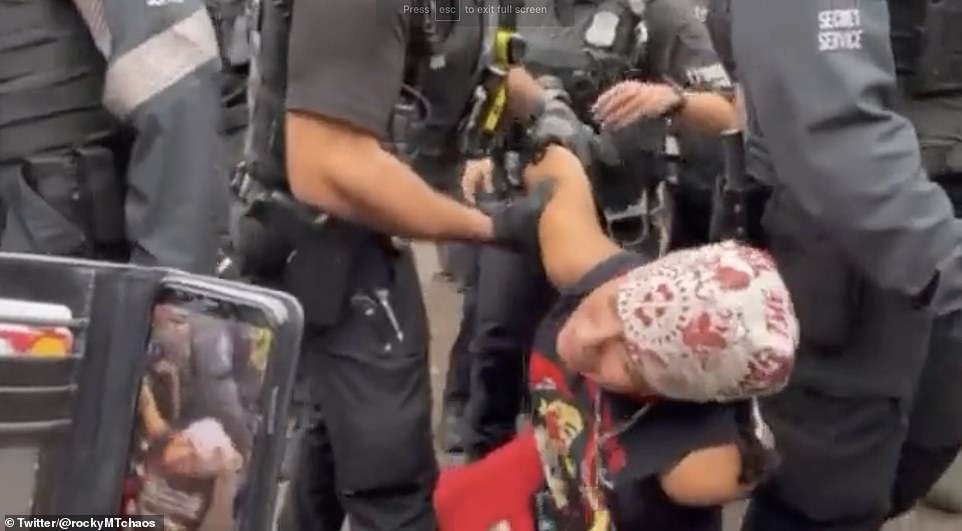 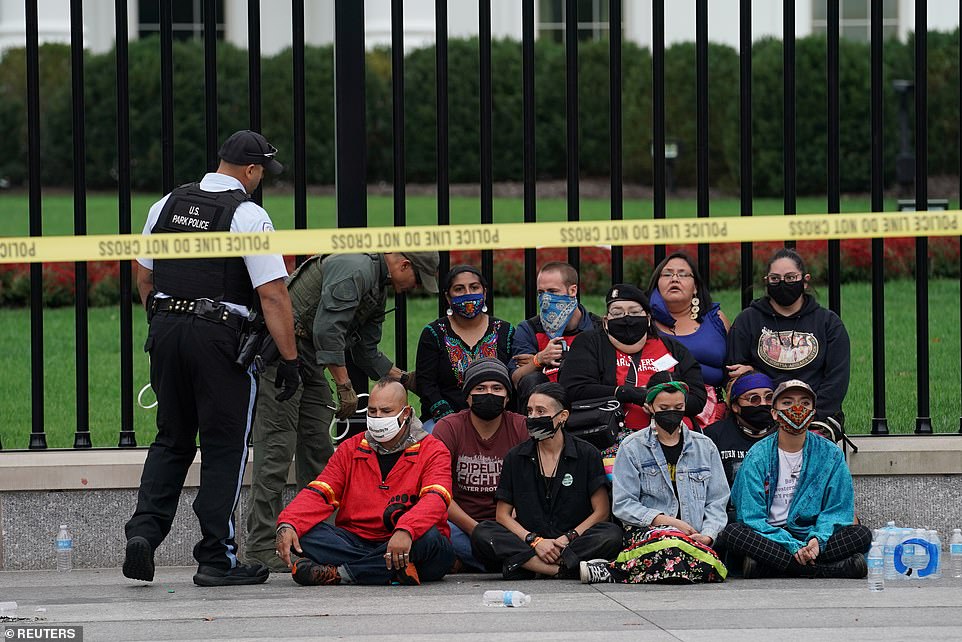 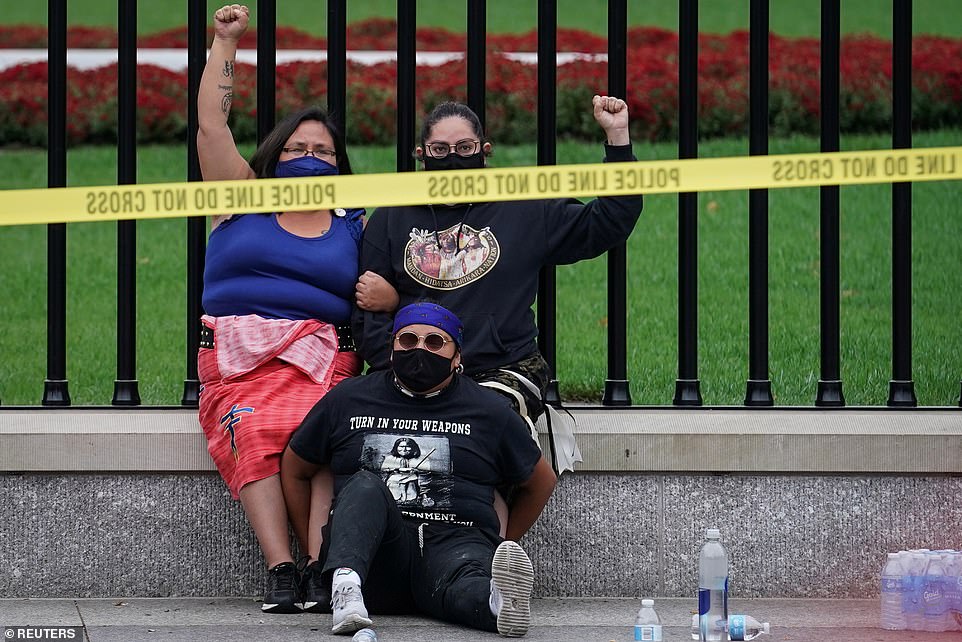 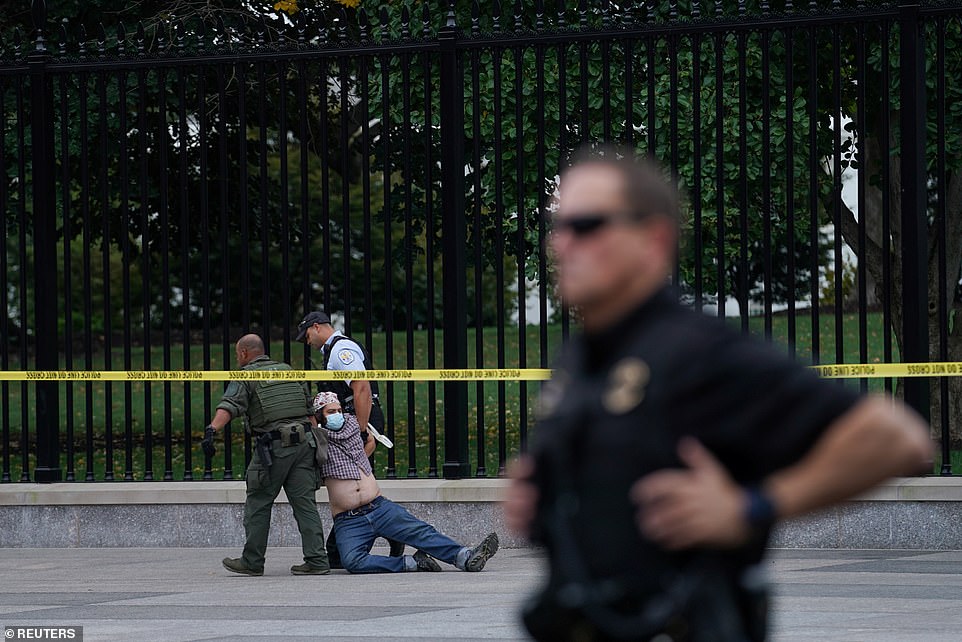 A demonstrator is detained and dragged by members of the U.S. Secret Service and US Park Police

Another image shows protesters apparently in police custody. At least eight demonstrators are seen sitting against the White House fence while armed law enforcement stand over them.

Around 10:30am the Washington Post reported that US Park Police ordered climate protesters to disperse to get arrested.

Footage of the police announcement shows an angry reaction from the crowd, including one person shouting, ‘You should be ashamed.’

But demonstrators remained outside the White House for more than half an hour afterwards. Some yelled at police officers to ‘quit your job.’

Another protester, who the Post identified as Ember Rose Phoenix, used a megaphone to question where these same officers were on January 6.

She accused the police of a double standard over how violent Trump supporters were treated compared to threats to arrest the climate activists.

‘This is what white supremacy culture and colonization do. Y’all let people in the Capitol. White folks just got in, was running around acting crazy. We’re sitting here peacefully protesting, and y’all out here violently in force,’ she said.

More than an hour later climate protesters who still had not dispersed were reportedly escorted to a tent where they were issued citations and then free to go. 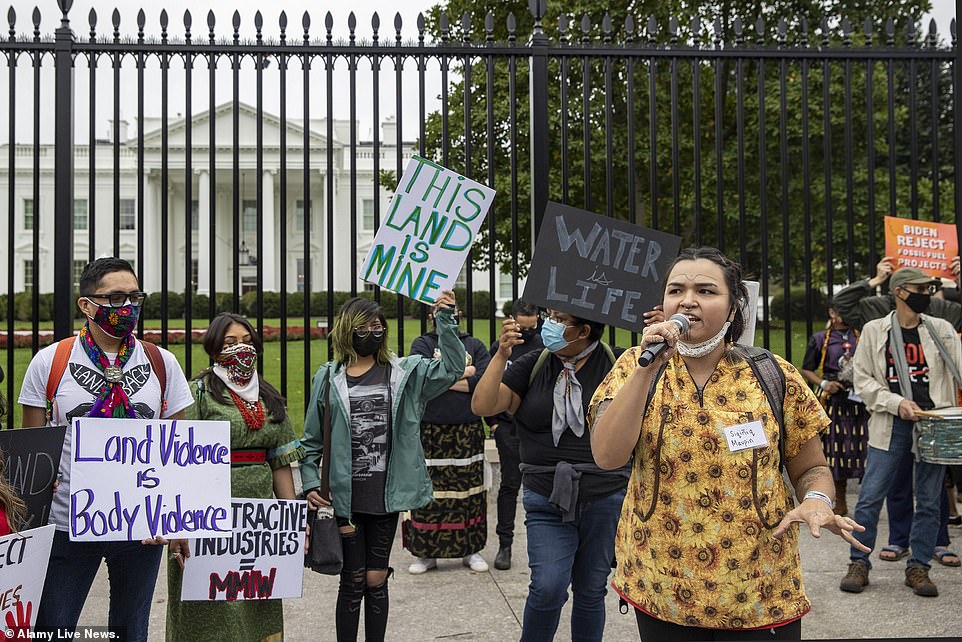 Even after police ordered the crowd to disperse, many activists remained for at least another hour 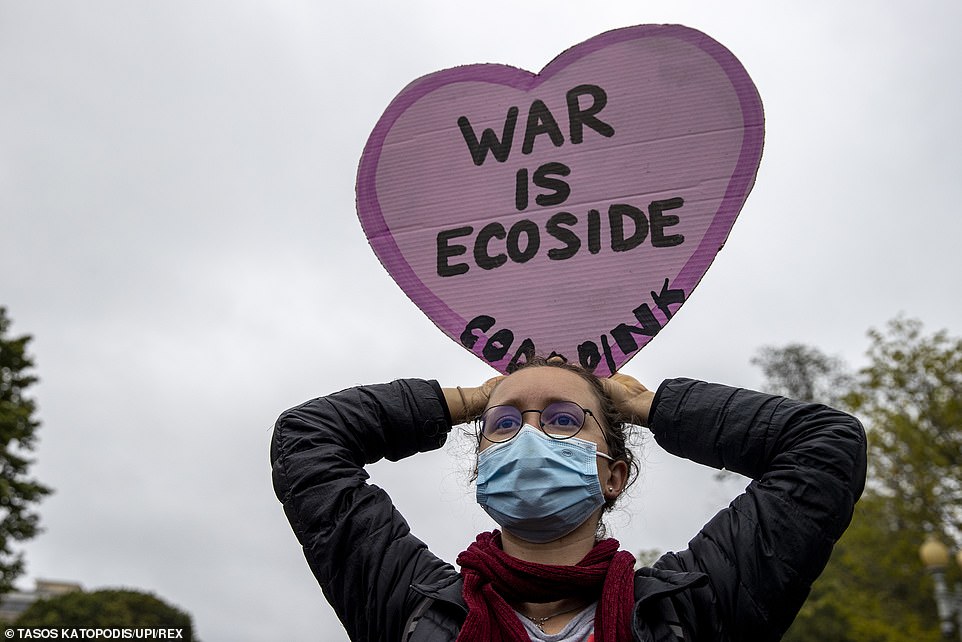 The Indigenous People’s Day demonstration was just the first of a five-day climate action event, each with a different focus of climate change’s impact 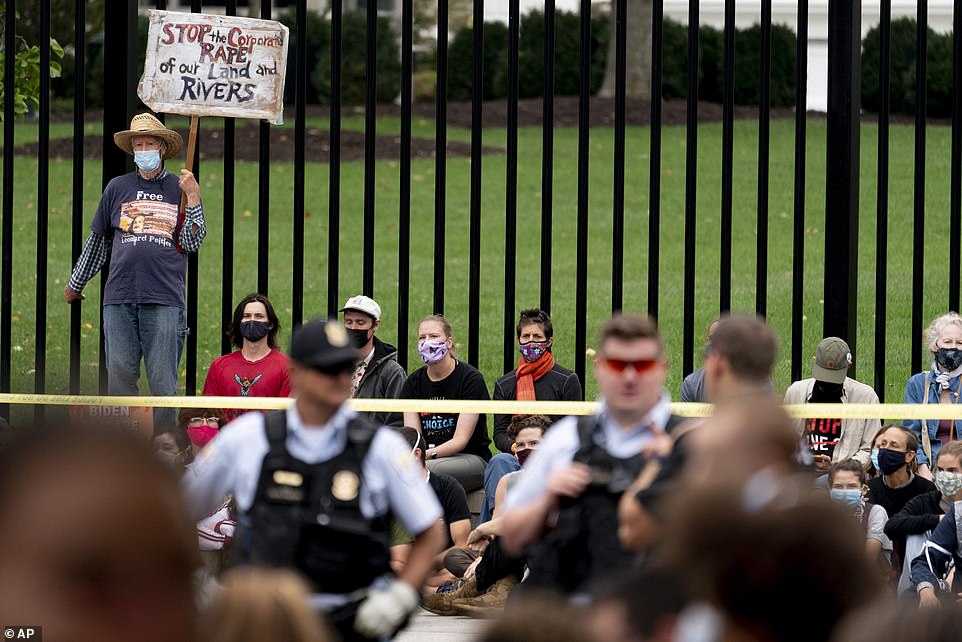 Protesters who remain in a closed section of Pennsylvania Ave. wait to be arrested as indigenous and environmental activists protest in front of the White House 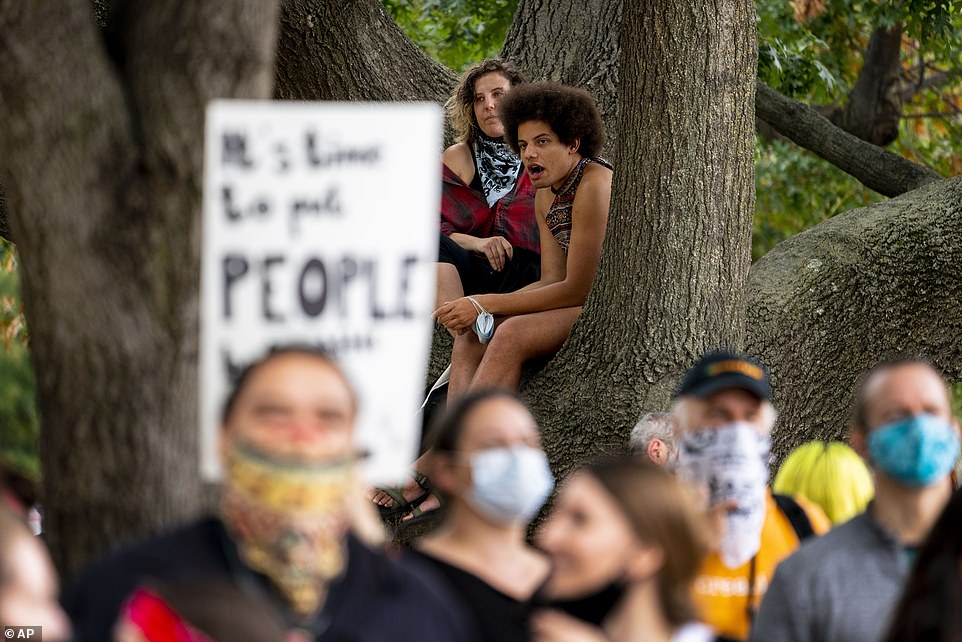 The event drew hundreds of people from all around the country 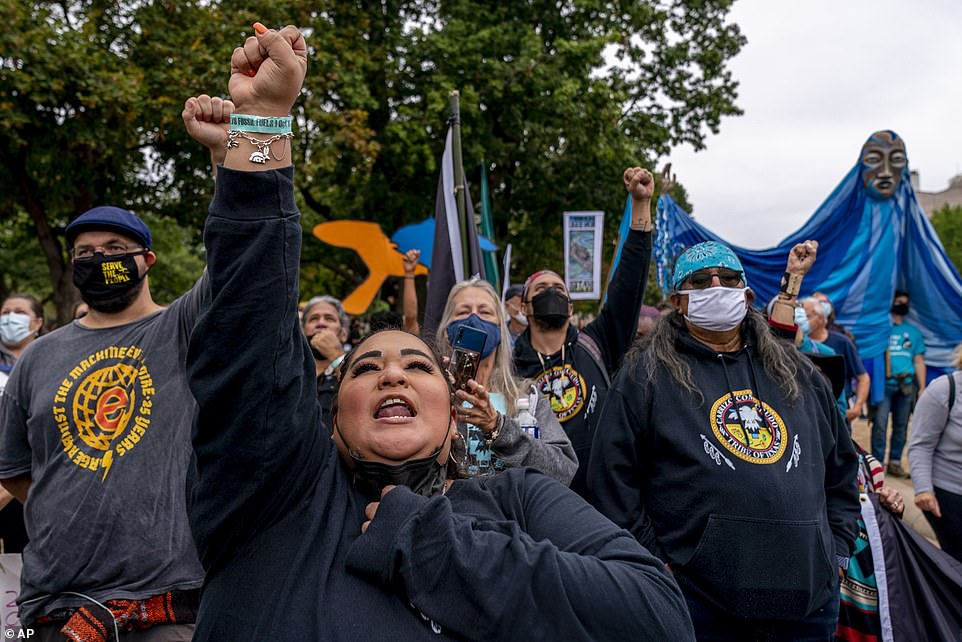 Bu lingering activists engaged in yet another stand-off with police.

Officers pushed barricades up against crowds to force them back, now appearing to be more than ten feet away from the White House fence.

An older man said, ‘You know, when the pro-marijuana people were here, Bush didn’t arrest anyone.’

Another person could be heard calling for the officers to wear masks.

By 1:45pm, most demonstrators reportedly left though a lingering police presence remained.

Biden, who is not due back at the White House until late afternoon Monday, missed the entire ordeal.

Through his brief term so far Biden has taken strides to bolster the Native American community. He appointed Deb Haaland to lead the Interior Department, the first indigenous person to lead a Cabinet agency.

Just last week he fulfilled a campaign promise by restoring the Bear Ears and Grand Staircase-Escalante national monuments to their original boundaries.

He signed the orders in a White House ceremony surrounded by Haaland and Native American tribal leaders of the Bear Ears coalition.

And on Friday, he released the first-ever presidential proclamation of Indigenous People’s Day.

30,000 Chinese gather to watch sunrise on first day of national holiday with absolutely NO social distancing – The Sun

After 13 days at sea and refusal by 5 ports, passengers aboard the Westerdam cruise ship are slated to disembark in Cambodia