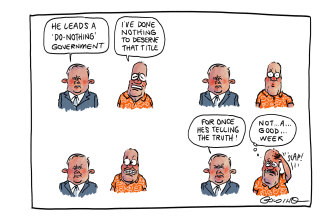 To submit a letter to The Age, email [email protected] Please include your home address and telephone number.

I was upset to read that Ernie Dingo was being targeted by anti-vaxxers as he tries to boost low vaccination rates among Indigenous communities (The Age, 27/11). There will always be a small percentage of people who strongly object to vaccinations. As an ex-immunisation nurse, I have learned to respect their decision even though, and especially now, it can affect the immunity of the rest of the community. Yet when they go out of their way to stop others making decisions, attacking people and spreading incorrect information, I find it hypocritical.
Jane Cheong, Aspendale Gardens

The World Health Organisation has labelled Omicron a new COVID-19 “variant of concern”, as it could be more infectious. Where is the new mRNA vaccine laboratory promised by the federal government to provide vaccines to protect us against this and other mutations?
Elizabeth Meredith, Surrey Hills

Happy to take the money

My son and his male partner, as high income professionals, pay tax. They pay a lot of tax. Will faith-based schools decline the income they receive from them?
Owen Wells, Mont Albert North

In praise of public

I am puzzled by Nicole Pedersen-McKinnon’s comment that having private health insurance “gave me the choice to immediately stop breast cancer in its tracks” (Sunday Age, 21/11). Many of us have had our cancers treated in the wonderful public health system. Public hospitals are free, whereas her out-of-pocket costs were about $10,000. Like her, I had a private room. And the public hospital staff were excellent.

Waiting times for elective surgery in public hospitals are sometimes excessive, and the pandemic has led to delays in surgery. But I could not find any evidence in the article that this has affected the prospects for cancer patients. Our public health system certainly saved my life.
Andrea Bunting, Brunswick

Generating fear is a proven election winner for the conservatives – “Dutton warns of China’s ‘next step’ after Taiwan” (The Age, 27/11). It is an appalling tactic and has potential to do much harm to Australia – adding to that already established by our government. But it is a good tactic according to the Coalition and a good way to perhaps wedge the ALP.

One can only hope people see through the scheme, dump the government and get us back to normal relations with China. Give me Paul Keating any day compared to this dreadful mob.
Ian Braybrook, Castlemaine

If Peter Dutton is so gung ho on confronting the Chinese government, why doesn’t he just authorise himself to take a patrol boat with some guns and ammo to mainland China and deal with them once and for all?
Greg Smith, Caulfield South

We are Aussies with our own way of doing and speaking and writing. Why adopt everything American? I love Americans and their culture (mostly) but it is theirs, not ours. As Duncan Fine (Opinion, 27/11) suggests, Black Friday in Australia was destruction and trauma for us; leave us with our Boxing Day for our sales.
Barbara Stewart, Beaumaris

Can I soak in the tub?

I could not agree more, Duncan Fine. And to add one more to your list: if it does not have a bath, it is not a bathroom.
Danny Neumann, Port Melbourne

What on earth are we doing chopping down trees to make pallets in this day and age (The Age, 27/11)? Surely Coles, Woolworths and Aldi should be driving a more sustainable change to recycled plastic pallets which support a circular economy. Rather than fuelling anger towards environmentalists by warning of empty supermarket shelves, we should be looking for a long-term, sustainable solution to avoid relying on finite natural resources.
Natasha Evans, Bacchus Marsh

Adorable, but be wary

Richard Glover’s article about his dog Clancy (The Age, 26/11) was hugely appealing to dog lovers like myself. But there is a crucial caveat. The medical literature is replete with stories of children being bitten, traumatised, disfigured and even killed by the family dog.

Dogs give out warning signs when they want to be left alone. Their ears flatten, they may growl or even just yawn. Small children are usually oblivious, and carry on tugging the ears or cuddling the reluctant pooch. The benefits of animals in the home are enormous. But please, don’t ever leave your small child alone with the dog.
Dr Nick Carr, Richmond

Re your article, “Push to raise “cruel” JobSeeker from below the poverty line” (Sunday Age, 21/11). It is time for a debate about introducing a universal basic income.
Terry Malone, Warburton

I don’t recall Scott Morrison calling NSW’s ICAC a “kangaroo court” when it found Labor’s Eddie Obeid had acted in a corrupt manner, with an ultimate jail term. Why would that be?
Simon Flint, Wantirna

Gay Alcorn sends an exclusive newsletter to subscribers each week. Sign up to receive her Note from the Editor.