Singapore: Indonesia Defence Minister Prabowo Subianto has revealed a pragmatism in Jakarta about Australia’s nuclear-powered submarine ambitions, saying he understands countries “will do whatever they can to protect themselves”.

Indonesia and Malaysia have expressed concerns publicly about the new trilateral defence agreement AUKUS being a potential catalyst for an intensifying build-up of arms in the region. 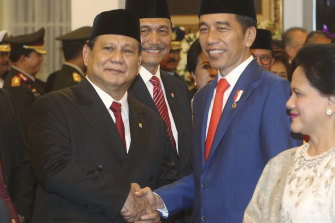 Prabowo, a likely presidential candidate again in the 2024 Indonesian elections after two unsuccessful runs, also repeated Jakarta’s formal stance during an appearance at a Middle East security forum. But the former army general conveyed a different perspective about AUKUS, the security deal between Australia, the United States and the United Kingdom under which Australia is to acquire a fleet of nuclear-propelled submarines.

“But as I said the emphasis of every country is to protect their national interest. If they feel threatened, if they feel that they have an existential threat, they will do whatever they can to protect themselves. We understand that and we respect them.”

His comments are more accommodating of Australia’s submarine plans and AUKUS than those previously uttered by Indonesian officials, including Foreign Minister Retno Marsudi. 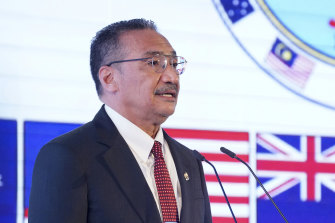 There was more apprehension, however, from his Malaysian counterpart Hishammuddin Hussein when he addressed the same audience of government ministers in Bahrain over the weekend, saying the chance of accidental conflict in the South China Sea was a major worry.

“My concern with the developments of AUKUS – and sometimes it’s rhetoric and sometimes it might be increased tensions, it might be reduced dialogue with regards to the two superpowers in our region – is it should not lead to unforeseen, unintended and accidental incidents in the South China Sea,” the Defence Minister said.

“If the South China Sea is full of military movement, the chances of accidents … is a real problem.”

He also said AUKUS could not be allowed to jeopardise the role played in the region by the Association of South-East Asian Nations (ASEAN), ahead of the group’s meeting on Monday with China’s President Xi Jinping.

“Specifically with reference to AUKUS, I’ve advised the trilateral to engage ASEAN bilaterally in each nation and as a bloc and do not just consider two or three nations of these 10,” he said. “We do not want these 10 nations to be broken up for any reason, especially not because of the geopolitical reasoning of superpowers in our region.”

Australia, meanwhile, voiced its support for the Philippines over Manila’s latest stoush with China over the behaviour of Beijing’s coast guard in the South China Sea.

Steve Robinson, the ambassador to the Philippines, said Australia was “concerned with recent destabilising incidents in the [South China Sea]”. It was a reference to last week’s incident in which Chinese coast guard vessels fired water cannons at Philippine military supply boats en route to a shoal in the Spratly Islands that the country has occupied since it deliberately ran a ship aground there in 1999.

Philippine President Rodrigo Duterte on Monday also weighed in. “We abhor the recent event in Ayungin Shoal and view with grave concern other similar developments,” he said. “This not does speak well of the relations between our nations.”

Prabowo and Hishamuddin met with US Defence Secretary Lloyd Austin while in the Gulf over the weekend. On Monday their leaders, Indonesia President Joko Widodo and Malaysia Prime Minister Ismail Sabri Yaakob, were meeting virtually with Xi at the China-ASEAN summit.

According to Chinese state media, Xi told ASEAN leaders Beijing would not “bully” its smaller neighbours over tension in the South China Sea and would work with south-east Asian countries to eliminate “interference” in the region.

“China was, is, and will always be a good neighbour, good friend, and good partner of ASEAN,” state media quoted Xi as saying.

China’s foreign ministry also announced it was establishing a comprehensive strategic partnership with ASEAN. It said it would donate a further 150 million vaccine doses to nations in the regional bloc and step up joint vaccine production and technology transfer.

How Barry Morphew begged for help to find wife Suzanne and offered $100,000 reward as he’s charged with murder