Home » World News » Inside Australia’s ‘terrorgram’: How neo-Nazism spreads in our cities

On September 21, a man using an alias sent an online message to a neo-Nazi who is facing terrorism charges in Adelaide. He was seeking guidance. Using the moniker “Underland”, the man, who lives in NSW, described feeling isolated and “under attack”.

“The more I’m investigating, the more I’m finding we need more support for National Socialism in New South Wales,” he wrote to the terror accused. 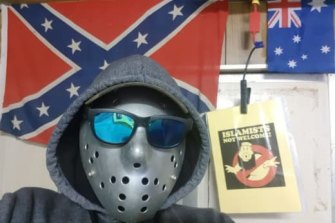 An image shared on the social media sites of a neo-Nazi group based in Australia.

The terror suspect (who can’t be identified as he is before court) responded by directing the man to contact the European Australian Movement, a neo-Nazi organisation founded by a notorious Melbourne extremist leader who cannot be named for legal reasons. Underland was delighted: “Yeah awesome, will do.”

The interaction is one of hundreds like it popping up on encrypted communication platform Telegram. They reveal Underland’s rapid descent into extremism, and that a small band of like-minded Australian men, who hide themselves behind masks and aliases, were similarly being drawn in by right-wing extremism.

By April, they had formed their own neo-Nazi cell, the “Illawarra Active” and were meeting face to face.

The encrypted messages provide a rare insight into what US terrorism researchers describe as the “evolution of neo-fascist coalition-building” and “the ways that extremist actors strategically use communications for propaganda purposes on Telegram”. 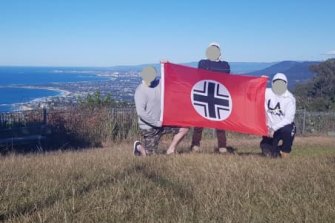 The messages suggest that key figures in Australia’s extremist circles are unperturbed by law enforcement attention, including being arrested and charged, and gleefully deride attempts by authorities to deradicalise them or their followers.

However, despite attempts by these men to remain anonymous, tracing online clues allows us to reveal their true identities.

‘Keen to do a sticker run’

Well before neo-Nazi propaganda began appearing this year at sites around the city of Wollongong and in Sydney’s CBD, the man calling himself Underland had started networking online across Australia’s extremist scene. Records of his communications obtained by this masthead reveal Telegram served as the perfect platform. It allowed him to mask his identity as he sought counsel and new introductions from entrenched extremist figures.

After Underland had been directed towards the Melbourne-based European Australian Movement on a Telegram-hosted neo-Nazi channel, Underland began communicating. His contact uses the alias “Aussie Meditations”. In February, The Age and The Sydney Morning Herald identified the user of this alias as Stefan Eracleous, a former young Liberal member turned neo-Nazi from Victoria. Eracleous was responsible for a January 19 propaganda video depicting three masked neo-Nazis burning an Aboriginal flag, reciting a white supremacist manifesto and attacking Greens senator Lidia Thorpe.

In May, Underland asked Eracleous what “stickers have you got an [sic] how much are they … Me and a few of the boys are keen to do a sticker run.”

It is unclear if Eracleous helped Underland obtain neo-Nazi material, but it seems likely. After the pair’s exchange of messages, Underland embarked on a propaganda campaign around Wollongong, placing stickers and posters up at several sites.

One of Underland’s aims appears to have been recruitment. Posters encouraged people to connect with his new neo-Nazi cell, the Illawarra Active, via its dedicated Telegram page. Young Australians were particular targets, with graffiti, stickers and posters placed on walls and signs at the University of Wollongong. Underland and a small number of others also targeted local migrant communities. One Telegram post uploaded by the group shows it placing “Islamists not welcome” posters at Wollongong’s Omar mosque. 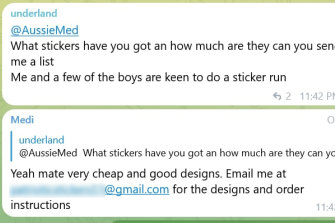 The message exchange in which ‘Underland’ asks for neo-Nazi material from a Melbourne-based extremist.

Budding racists who responded to the request to follow Illawarra Active’s Telegram account were confronted online with material that became increasingly disturbing. On May 21, the account shared a video promoting the European Australia Movement and urged supporters to help “free” one of its leaders. The man is on bail in Melbourne while facing charges relating to an assault allegation. His case has been turned into a rallying point by neo-Nazi groups across Australia.

On June 2, the Illawarra Active account shared material created by a group that is proscribed as a terrorist organisation in Australia, the overseas-based National Socialist Order. It included a video outlining the core beliefs set out in a white supremacist book, Siege, which has been used as inspiration by terrorist actors across the world and which champions violent conflict with mainstream society.

The New Zealand Royal Commission called after the Christchurch massacre noted the Australian terrorist who committed the atrocity was an adherent to the views espoused in Siege, particularly the idea that violent action should be embraced to accelerate the reach and power of white nationalism. 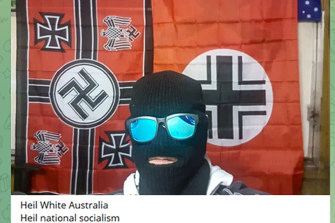 An image on the Illawarra Active social media site.

The number of Australians who responded to the propaganda drive by following the Illawarra Active’s Telegram account appears to have been no more than about 50 at any time, even after the group gained a publicity bounce from an Illawarra Mercury story on June 6 headlined “Police investigate the ‘white supremacy, neo-Nazi’ flyers found at University of Wollongong campus”.

But while the group remains small, its Telegram channel reveals devoted followers using the encrypted platform to communicate, publicise events and liaise with other neo-Nazi cells across Australia.

Researchers from the US’s Centre on Terrorism, Extremism and Counterterrorism recently described how Telegram had enabled the formation of a so-called “Terrorgram” community, which uses the encrypted platform as “the principal point of online organising, identity building, propaganda distribution, and more”.

The researchers analysed thousands of Telegram messages from two new militant neo-Nazi networks to form insights into their “diffuse networks” and how they relate to the “threats of real-world violence they pose”.

The report warns that even small online cells may pose a tangible terror risk, citing the June 2021 thwarting of a terror plot in Texas by a member of one of the two networks analysed in the report.

“Telegram is in many ways an ideal platform for dangerous actors. It has good functionality, communications are encrypted, its user base is expanding and content moderation is practically non-existent,” says Lydia Khalil, a Lowy Institute research fellow and author of the upcoming book Rise of the Extreme Right.

Evident in Underland’s Telegram history is a hunger to move off the internet and into the real world. In one message thread with the Adelaide terror suspect, Eracleous and several EAM members, Underland discusses buying a large block of land to “set up a decent community” and creating a White Australia political party. Political or racist violence is a deliberate theme in many posts.

But Underland’s online activity also has an unintended consequence, revealing a series of clues about his true identity. Three years of his internet posting, reviewed by anti-fascist researchers from The White Rose Society, reveals a job (arborist), a first name (Adrian) and a middle initial (J), all pointing to a 34-year-old Wollongong man called Adrian John Carr. 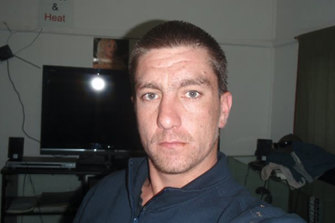 More online digging shows that Carr used his real email and name to set up a Skype account. Its profile photo displays the name Underland. An archived Twitter account reveals a similar link between Carr and the alias Underland.

When called by this masthead, Carr denied he was Underland, claiming his various social media accounts had been hacked. “I got defrauded, my identity got stolen,” he said. He did confirm, however, that he was the author of a since-deleted post from his Facebook page that described Jews as “scum”.

Carr’s fellow cell members include Wollongong man Ben Thomas, 36, whose identity is given away by the distinctive hand tattoos that appear both on his Facebook page and on the Illawarra Active’s Telegram page. Thomas’s hands can be seen on some of the cell’s propaganda videos plastering neo-Nazi propaganda around Wollongong. He could not be reached for comment. 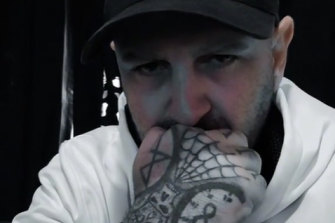 A NSW man who had been approached to join the group described Carr as its key actor and noted its members had nearly all experienced family and mental instability and trauma as younger men. The man, who asked to remain confidential, blamed “people on the internet” for radicalising Carr.

“I don’t like what AJ [Adrian] is doing. I don’t like the hate that is being spread. But you need to ask, ‘why is Adrian the way he is? What is causing these young men in the regions to slip through the cracks?’”

The young men in Illawarra Active appear to relish the brotherhood formed first in the Telegram neo-Nazi community and then in person, as they urge each other on to become more radical. 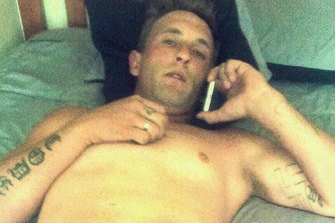 As researchers overseas have observed of European and American Telegram neo-Nazi and white supremacist groups, the Australian “terrorgram” community is also notable not only for its extremist camaraderie, but its resilience.

The chats involving Carr and his fellow cell members appear to observe the recent arrest of like-minded Australians by the federal police counter-terror teams as reason to continue their fight, rather than to rethink their views.

It also shows how quickly a small band of disorganised and disillusioned men from regional Australia can fall into the orbit of highly organised international extremist groups. The National Socialist Order is banned in Australia as a terror group, but Illawarra Active has freely shared its propaganda online.

“Right-wing groups are increasingly convinced they must organise globally to meet global challenges,” she says.