Iranian protesters have burned an effigy of the UK’s ambassador in Tehran as the country’s judiciary warned he is now ‘persona non grata’.

Rob Macaire was arrested in the Iranian capital on Saturday after he left a vigil for the 176 killed by Tehran when its military shot down a passenger plane earlier this month. He was held for an hour and then released.

A cardboard cutout of him was burned alongside UK and US flags at Tehran University by regime loyalists.

Gholam-Hossein Esmaili, a spokesman for the Iranian judiciary, called for Mr Macaire to be expelled for playing a ‘provocative role’ in protests over the downed Ukrainian jet. 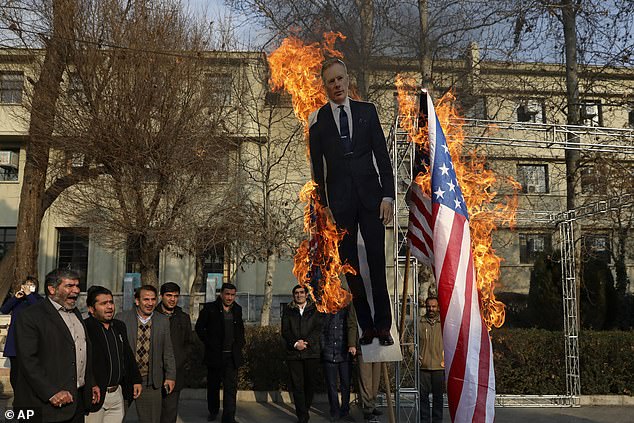 ‘Under international law, such a person is a ‘persona non grata’,’ Mr Esmaeili told reporters.

‘The (Iranian) people expect the person to be expelled and that is also what international law calls for.’

Mr Macaire was accused of failing to respect the Islamic republic’s laws when he attended a vigil for the people killed when Iran accidentally downed a Ukrainian jet.

He was held for about three hours after attending the vigil, with the detention being described by Dominic Raab as ‘illegal’.

However the diplomat said he went to an ‘event advertised as a vigil for victims’ of the tragedy to pay his respects to the four Britons killed when the aircraft was shot down, but ‘left after five mins when some started chanting’.

It came as Boris Johnson yesterday told BBC Breakfast the Iran nuclear deal should be replaced with a ‘Trump deal’ amid fears the regime could acquire weapons within a year. 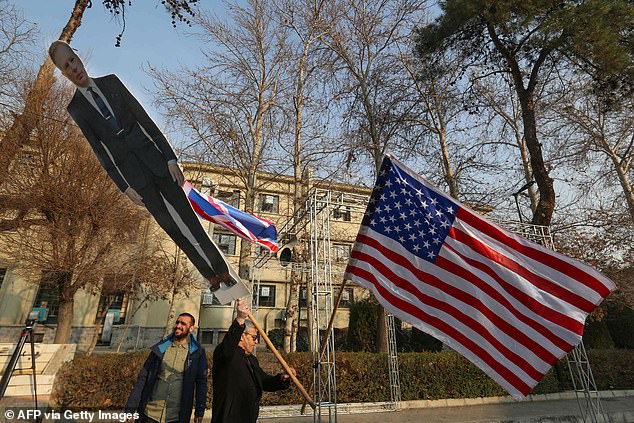 A cardboard cutout of Mr Macaire, who was arrested in the Iranian capital on Saturday after he left a vigil, was burnt at Tehran University

The Foreign Office was understood on Tuesday evening to have not been informed of the latest escalation by Iran through official channels.

The rising diplomatic tensions came as the UK, France and Germany accused Tehran of breaching the terms of the Iran nuclear deal.

Tensions have soared with Iran since the U.S. president pulled out of the Joint Comprehensive Plan of Action (JCPOA).

The foreign ministers of the UK, France and Germany issued a joint statement saying Iran was ‘not meeting its commitments’ over the pact.

It added that they were referring the matter to the dispute resolution mechanism.

The JCPOA lifted sanctions on Iran for agreeing to restrictions on its nuclear activity to ensure Tehran did not acquire a nuclear weapon.

Iran’s Revolutionary Guard admitted accidentally shooting down the Ukrainian jet, killing all those on board, despite initial denials.

How much did Joe Biden pay in taxes?

Quick thinking mother evades out of control truck in Vietnam