Home » ‘It makes me who I am’: Girls relieved to be back on the footy field

As their heroes take centre stage for the AFLW grand final on Saturday, the future of the game is being played on local ovals.

Girls and women are once again lacing up their boots after a year without club footy. 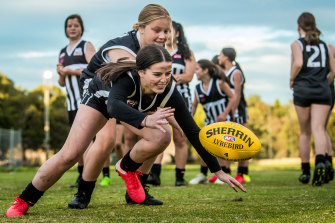 The number of female football players nationwide has jumped from 380,000 in 2016 to 600,000 now, and some clubs are reporting even greater enthusiasm from teams than before the pandemic.

But at Moonee Valley Football Club there are 30 more junior players this year and an extra junior and senior team. The club now has more than 170 female players, after starting with just 17 in 2016.

“I was worried with a year off from football it’s quite easy for senior and junior players to lose their love of the game,” club secretary Hannah Greasley said. “It is extremely pleasing to see more numbers come back this year.”

Jemma Moschini, 13, a new recruit, had tried her hand at dance like her sisters but said she felt “stronger” in a team where she could play “a bit more rough”.

During lockdown she watched and re-watched AFL games to learn where she could improve and walked around the house with a football in her hand.

“Football, it makes me who I am,” Jemma said. “I knew how women weren’t usually allowed to play football … I was more grateful I was able to play, and I think it’s a sport everyone should be able to enjoy.” 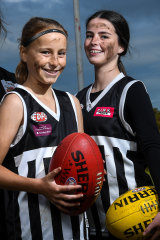 AFL women’s football general manager Nicole Livingstone praised the resilience of local clubs as their teams returned to the fields.

“We’re really encouraged with how participation numbers are looking and with junior football about to restart across the state off the back of a great AFLW season,” Ms Livingstone said.

Victorian participation in community leagues has returned to pre-pandemic levels, an AFL spokesman said, but junior footballers are down five per cent and leagues hope numbers will increase once seasons are under way.

Ms Greasely said the strength of Moonee Valley’s teams was thanks to a club culture where senior women attended junior training to mentor young players.

“If you have a close-knit group, it shows on the field,” she said.

Under 14s player Audrey Brown spent lockdown kicking the footy and running with her mother, Sarah Gooden, who is also her assistant coach and a player in the club’s seniors. 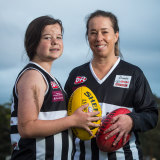 “I just missed it because of the friendliness of the sport, the roughness, and getting to know the people,” Audrey says.

The mother-daughter duo won a cricket premiership last summer when Monnee Valley fielded its first women’s side in a decade.

“To be involved with Audrey and her team means the world to me,” Ms Gooden said.

Ms Gooden grew up part of a football-netball club in Wagga Wagga, but never thought she and her daughter would be playing Australian rules footy together.

“The girls played netball and the boys played footy and that was it,” Ms Gooden said.

“The opportunity is now amazing. The girls see these pathways and these superstars and they want to go there too.”

Danielle Barone, 12, started playing football as a seven-year-old as the only girl on a Coburg team, and is among the newcomers to Moonee Valley this year.

“I just wanted to play,” she said. “[But] it is easier being in an environment where you can relate to the girls.” 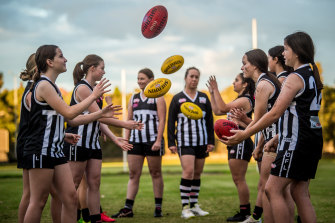 Some handball drills for the Moonee Valley girls.Credit:Justin McManus

Last year, Danielle missed the adrenaline of running onto a field and the way training helped to clear her head after school.

She has found playing footy has opened new doors at school, too.

“It was easier for me to join in and play footy with the boys or represent my school in footy on a mixed team, and just create new friendships.”

Ms Livingstone says that while they confronted unexpected challenges in 2020, “the momentum behind the women’s game across the country has meant that we have a really strong foundation with which to keep growing female football”.

Trump continues to fuel rumors that Scarborough killed aide in 2001

Channel 4 could cancel this year's Great British Bake Off