Home » World News » ‘It would be an issue’: Malcolm Turnbull intervenes in UK’s Huawei debate

Mr Turnbull responded to the UK Prime Minister's challenge issued earlier that critics of Huawei should offer alternatives. Johnson's National Security Council (NSC) is due to make a decision within a fortnight, nearly 12 months after the original determination was due. 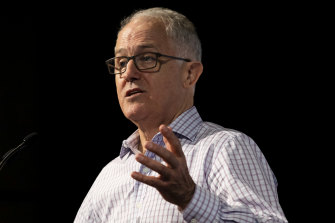 Earlier Johnson appeared unmoved by a US delegation of security officials which flew to Britain for last-minute lobbying, a retreat from his position after the NATO summit and his one-on-one meeting with US President Donald Trump.

"The British public deserve to have access to the best possible technology," Johnson said when asked about Huawei in a BBC TV interview on Tuesday. "We want to put in gigabit broadband for everybody. If people oppose one brand or another, then they have to tell us what's the alternative."

Turnbull said the British could use two "very large vendors" in Erickson and Nokia, "so there are plenty of alternatives".

While Johnson said that as Prime Minister he did not want "to put in any infrastructure that is going to prejudice our national security or our ability to cooperate with Five Eyes intelligence partners", his comments suggest his NSC may come to the same conclusion as that of his predecessor Theresa May and allow some Huawei involvement.

Huawei welcomed Johnson's comments and reiterated its stance that it would not comply with Chinese law if ever ordered to conduct espionage by Beijing.

"I think that that provides all Western countries with pause for thought if you're dealing with a company that can be ordered by its government to carry out espionage on their behalf effectively, where does that leave you in terms of dealing with them?"Fox told the Institute for Government in London.