Kigali: The Jamaican woman vying to be the next boss of the Commonwealth says the island nation’s push to become a republic and its desire for slavery reparations are no obstacle to her tilt at the top job.

As a Jamaican, Kamina Johnson Smith would back herself to win the sprint, despite swinging in only two months ago to challenge to Baroness Patricia Scotland who is seeking to extend her term at this week’s Commonwealth Heads of Government Meeting (CHOGM) in Kigali, Rwanda.

Johnson Smith has been Jamaica’s foreign minister for the last six years. Her bid to become the next secretary-general of the Commonwealth Secretariat, the association of 54 Commonwealth countries now headed by Prince Charles, follows Jamaican Prime Minister Andrew Holness’ renewed campaign to remove the Queen – or her heirs – as head of state. 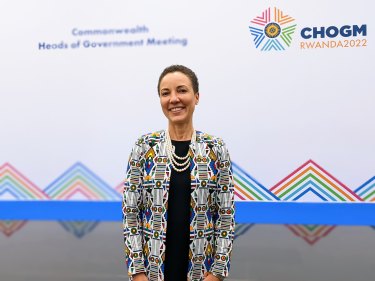 In April, when Prince William and his wife Kate, Duchess of Cambridge, visited Jamaica as part of the Platinum Jubilee, Holness told the couple that his nation was “moving on and we intend to attain in short order our development goals and fulfil our true ambitions as an independent, developed, prosperous country”.

In a wide-ranging interview in Kigali, Johnson Smith said reparations for the legacy of colonial slavery were for the United Nations, and not the Commonwealth to decide. 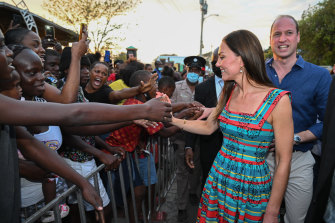 Catherine and Prince William, the Duchess and Duke of Cambridge, visit Trench Town, the birthplace of reggae music, in Kingston, Jamaica, during the Platinum Jubilee Royal Tour of the Caribbean in March. They were criticised as being “tone deaf”.Credit:Getty Images

“The Commonwealth cannot be everything to everyone and it cannot take [on] every issue,” she said.

“There are several issues which reside in the UN and which member states of the Commonwealth are already treating, including matters relating to reparations. To replicate the voice diffuses the voice,” she said.

The lead-up to this summit has been plagued with the perennial question of the Commonwealth’s purpose and the British monarch’s role as titular figurehead of the group.

Johnson Smith said she saw the common purpose, unity and shared English-language links of the Commonwealth as central to making the organisation a more proactive global force, tackling issues such as climate change.

Johnson Smith denied that her challenge for the top job was too late to be effective.

“As one foreign minister said to me, if she had to put her money on anyone in a sprint it would be on a Jamaican woman. So I have taken that, I’ve owned it,” she laughed.

The Jamaican’s nomination follows the aborted attempt by Kenya’s Monica Juma to challenge Scotland for the job. Scotland has alienated many countries in the bloc including the UK and Australia.

Johnson Smith and Juma were both accused, by supporters of Scotland, of being British puppets.

The minister said she was offended by that suggestion.

“Not only national offence but personal offence,” she said. “The role we’ve played in decolonisation, liberation, in human rights and in the promotion of democracy globally, should speak for itself, that we’ve long acted as a nation beyond our size.”

Johnson Smith’s candidacy has split the Caribbean bloc, the largest within the group, and threatens to upset African nations.

This is because under convention, a secretary-general’s term runs four years and reelection is typically unchallenged, meaning the term usually runs for eight years.

Because Scotland’s term was extended by two years due to the pandemic and the twice-delayed CHOGM meeting, she has said she would seek just two more years, after which it would be Africa’s turn to field a candidate.

Johnson Smith confirmed she was seeking a four-year term and that a second term would be up to Commonwealth members.

She rejected criticism of her nomination as divisive, saying she was running to unify the organisation that became split under Scotland.

“Democracy is all about choice and presenting more than one choice, particularly where it has been encouraged, there were countries across many regions that encouraged me to come forward,” she said.

“The UK is supportive of my candidacy … they’re not the only country,” she said adding India, Singapore, Maldives, Grenada and Belize also backed her..

Under the Morrison government, Australia was thought to be strongly campaigning for Johnson Smith, but this is believed to have shifted to a more neutral stance since the change of government in May.

Scotland was plagued by early funding rows about how she managed the bloc’s finances, leading to Australia, the UK and New Zealand pulling funding.

Johnson Smith said proper governance of the Commonwealth, so that more funding could be spent on improving living standards across the family of nations, was her core commitment.