The three men charged in the death of Ahmaud Arbery were found guilty, after a 14 trial and two days of deliberation.

Gregory McMichael, Travis McMichael, and William “Roddie” Bryan Jr. have been found guilty in the death of Ahmaud Arbery, the unarmed 25-year-old Black man who was fatally shot while he was out for a jog in Satilla Shores, a neighborhood near Brunswick, Georgia in February 2020. Travis was found guilty on all charges. Gregory found not guilty on a malice murder charge, but guilty on the other counts. Bryan was found not guilty on a malice murder charge, as well as one felony murder charge and one count of aggravated assault, but he was found guilty on other charges. After two days of deliberations, a judge read the verdicts and thanked the jurors for their time and work on the trial on Wednesday November 24.

Following the verdict, Jameela Jamil, Cynthia Bailey, and more celebrities have taken to social media to react to the news. Many felt that justice was served to the three men. Jameela quote tweeted a CNN story about the verdict and simply wrote, “Justice.” Democratic activist Stacey Abrams tweeted that she hoped that the verdict brought some peace to Arbery’s loved ones. Cynthia also sent prayers and well-wishes to Arbery’s family.

Many people also offered condolences for Arbery’s family. New York City Mayor Bill de Blasio thanked the jury for holding the three men accountable, but also noted how it could never make up for the loss that Arbery’s family faced. “This verdict can never undo the anguish the Arbery family has experienced, but at least justice has prevailed,” he wrote. As the guilty verdicts were read, Arbery’s mother Wanda Cooper Jones was seen nodding in the courtroom.

Arbery was shot on Feb. 23 after a confrontation with Gregory McMichael, 64, and his son Travis, 34. The father-son duo chased down Arbery in a pick up truck, firearms in tow, claiming in court that they were under the presumption that Arbery was a burglar after neighbors became concerned about possible break ins at a home under construction. The men have claimed “self defense.” 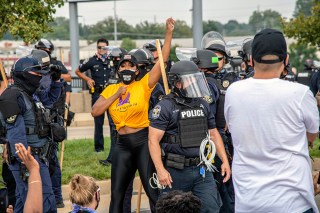 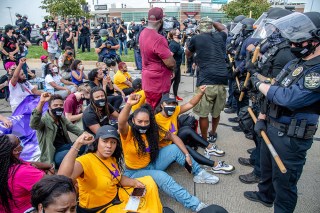 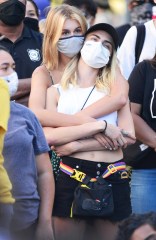 The McMichaels and Bryan were not arrested until several months later in May of that year, which came after a video shared by Bryan went viral online, sparking national outrage weeks before the police killing of George Floyd in Minneapolis. An attorney for Arbery’s family called his death a “modern lynching,” stating, “These men were vigilantes, they were a posse, and they performed a modern lynching in the middle of the day.”

In June 2020, the McMichaels and Bryan were indicted, each facing nine criminal counts, including felony murder and aggravated assault. In April, they faced additional hate crimes and attempted kidnapping indictments. All three pleaded not guilty. Ben Crump, one of the Arbery family’s attorneys, called the indictments a “significant step on the road to justice” following the news. Following the news of their verdict, Crump shared the ruling on his Twitter.

“While nothing will bring back Ahmaud’s life, it is important that a grand jury recognized his life had value and was wrongly and ruthlessly ended,” Crump said at the time. Following Arbery’s death, Gabrielle Union, LeBron James, Justin Bieber, Tracee Ellis Ross, and Joe Biden were among the many celebrities and public officials to call for justice. Jay-Z, Alicia Keys, Meek Mill, and more artists also penned an open letter to Georgia government officials, including Governor Brian Kemp, demanding justice.

Shoppers left in hysterics by VERY rude Christmas tree – but can you spot why they’re giggling?