Jamie Lee Curtis is among the celebrities outraged over Kanye West's social media behavior. Over the weekend, the 45-year-old rapper's Instagram and Twitter accounts faced restrictions after he posted antisemitic messages. Curtis, whose father was Jewish, visited the Today show on Monday and was visibly emotional when West's tweets were brought up.

"I woke up and I burst into tears," Curtis told Hoda Kotb. "What are you doing? It's bad enough that fascism is on the rise around the world, but on Twitter? On a portal to pour that in, as if Jewish people haven't had it hard enough?… As if Asian people haven't had enough. I mean, it was just abhorrent." 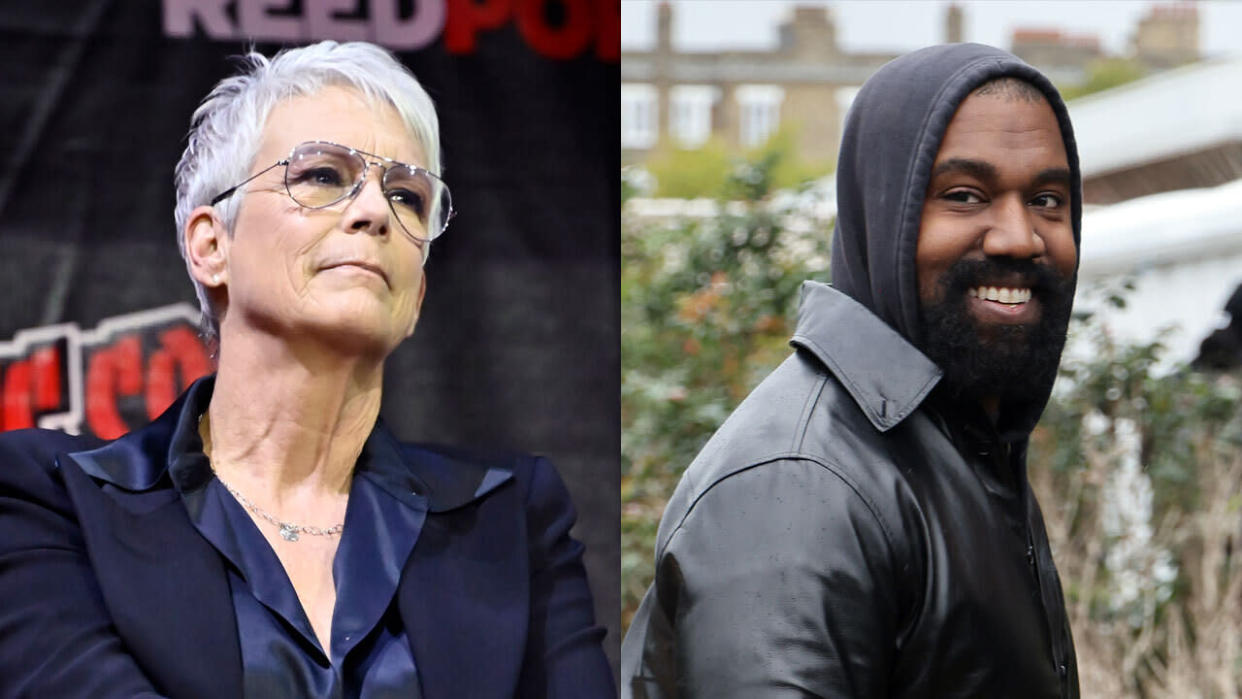 Twitter removed West's messages that read: "I'm a bit sleepy tonight but when I wake up I'm going death [sic] con 3 On JEWISH PEOPLE … The funny thing is I actually can't be Anti Semitic because Black people are actually Jew also… You guys have toyed with me and tried to black ball anyone whoever opposes your agenda."

Kotb, who's interviewed Curtis many times, noted how she's "never seen your eyes well up in anger like that."

"I woke up and… I thought [about] my grandparents," Curtis replied. "It's just abhorrent behavior, I hope he gets help. I hope his children get help from him. It's terrible."

Weird how all these “free, independent thinkers” always land at the same old anti blackness and anti semitism.

Kanye threatened the Jews yesterday on twitter and it’s not even trending. Why do mostly only Jews speak up against Jewish hate? The silence is so loud

The Black-Jewish Entertainment Alliance (BJEA) spoke out against West's comments in a statement to Yahoo Entertainment:

Ye's recent statements about the Jewish community are hurtful, offensive, and wrong. They perpetuate stereotypes that have been the basis for discrimination and violence against Jews for thousands of years. Words like this tear at the fabric of the Black-Jewish relationship.

The Black and Jewish communities must stand together through incidents like this to make clear that trafficking in hateful stereotypes is unacceptable – and that the words of one entertainer do not reflect the views of an entire community.

The Anti-Defamation League responded as well.

Power. Disloyalty. Greed. Deicide. Blood. Denial. Anti-Zionism. All of these are antisemitic tropes that we break down in our #AntisemitismUncovered Guide at https://t.co/1D3LOM8xXQ. Many of these myths have influenced @KanyeWest's comments recently, and it's dangerous. https://t.co/fKQLPFkDR2

West, who legally goes by Ye, has been defiant about his controversial beliefs since his "White Lives Matter" stunt at Paris Fashion Week one week ago. With his social media platforms restricted, West went over to YouTube on Monday to drop a new vlog titled Last Week.

Another scene shows West meeting with Adidas over his strained partnership with the company. The sit down begins with the Grammy winner playing a pornographic video to executives.

"Come on," one of the men, whose face is blurred out, says as he tries to get West to put the phone away.

West was apparently trying to make the execs feel "extreme discomfort," per one of his team member's, similar to the discomfort the musician feels as he believes Adidas stole his ideas. Adidas, who started working with West in 2013, announced last week the company is reviewing its relationship with West. The meeting included in West's vlog appears to have been from three weeks ago, as the rapper's Gap deal, which was terminated on Sept. 15. is mentioned.

Another clue the vlog isn't from actually from last week is the end scene with West's ex-wife, Kim Kardashian, as the two come together to watch daughter North West's basketball game. However, TMZ obtained images from North's game on Friday night and both stars are — very notably — wearing different outfits. West wore one of his "White Lives Matter" shirts most recently and Kardashian reportedly "snubbed" him at the gym. The Kardashians star has not publicly reacted to the recent controversy engulfing her former partner — but her family has weighed in.

Defaced Nazi memorial in Canada being investigated as ‘hate crime’