Will King Charles step in to help save the magical gas lamps threatened by council numbskulls? Though there are just five London lamplighters left, all are evangelical about both their job and these beautiful beacons, writes JANE FRYER

Aran Osman is perched 12 ft up a ladder on a dark and drizzly evening in Central London, fiddling about with a 100-year-old gas lamp in the gloom.

Most of us would be sighing, or swearing, or grumbling under our breath. But not Aran. As he swings the little glass door open on its ancient hinges, gives the mechanism a quick once-over, checks the gas mantles, and starts winding with a big shiny key, he’s aglow with pride.

‘When you get up here, it’s so beautiful. Just look at that,’ he chirps as the four delicate mantles made of silk spark into life. ‘When the lights are out and you put them back up — the sense of joy! My heart lifts.’

The soft, golden gleam lights up his happy face. The rain falls gently in the misty night air. The smell of mulching autumn leaves rises and, behind us, Westminster’s Victoria Tower looms and Big Ben chimes. If it wasn’t for Aran’s smart, modern British Gas anorak, we could almost be back in Dickensian London with its smoggy air and brooding sense of mystery. 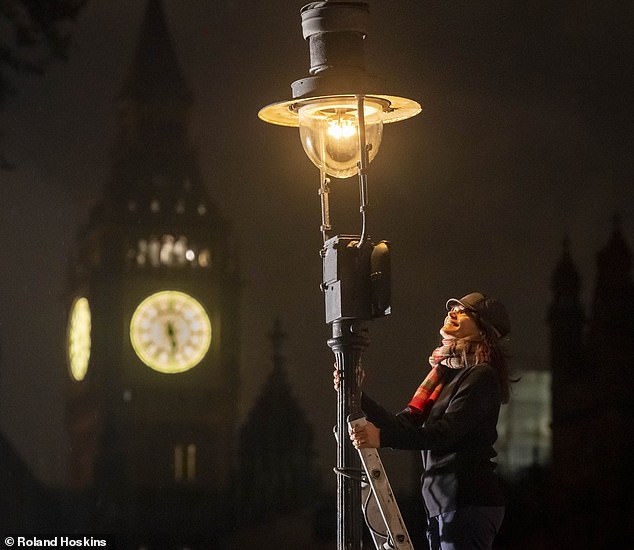 Jane Fyrer meets the people who maintain Westminster’s network of gas lights (Pictures: Jane at the top of a ladder) 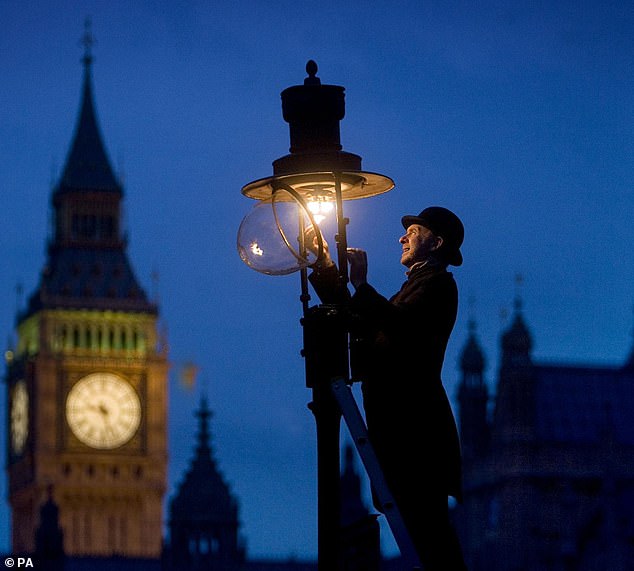 Instead we’re a stone’s throw from the busy A3212 and Aran — one of the tiny but very dedicated team who each spend up to 60 hours a week caring for the city’s 1,500-odd gas lamps — is taking me on his rounds; showing me how he cleans and winds and mends and fettles his exquisite cast iron charges.

‘You become very attached to them — like friends, almost,’ he says, as he explains the difference between the electronically controlled gas lamps (with a digital mechanism to turn them on and off) and the mechanical ones that need winding every fortnight. ‘But I love them all.’

And he is not alone. Though there are just five London lamplighters left, all are evangelical about both their job and these beautiful beacons. They refer to themselves as ‘guardians’ and ‘custodians of the lamps’. They’d do the job for nothing, they tell me, if they had to. No one ever leaves this team, except to retire. And even then they’d prefer to work on, were it not for the pension. 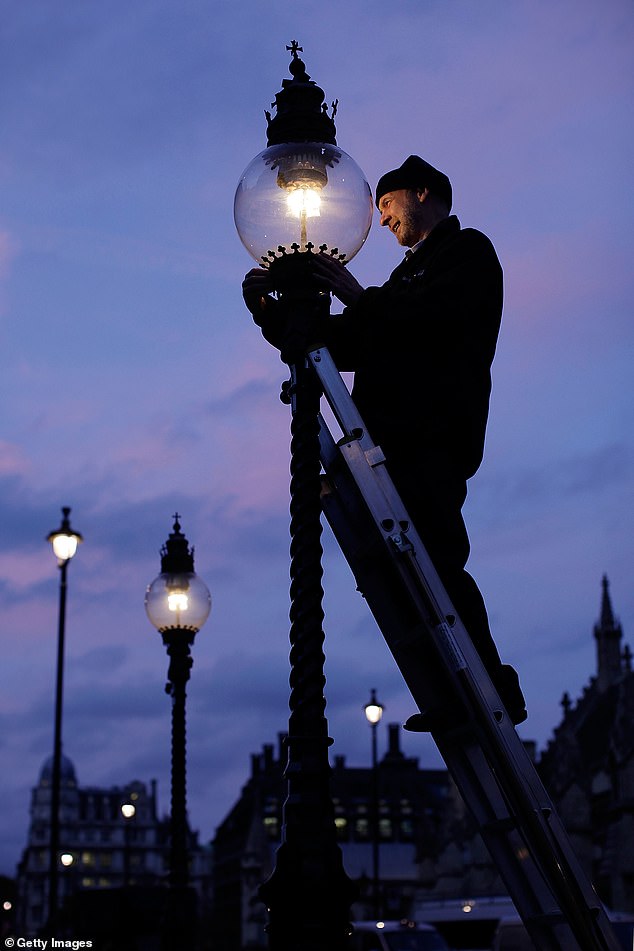 A tiny but very dedicated team each spend up to 60 hours a week caring for the city’s 1,500-odd gas lamps 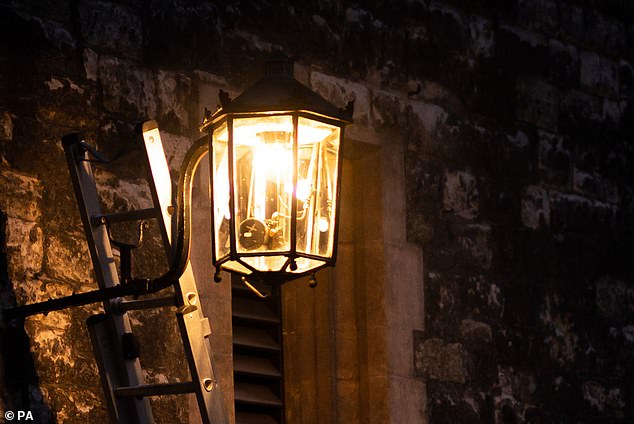 They talk constantly about the lamps to each other, to members of the public, to their long-suffering wives, and to former colleagues who have retired but can’t say goodbye after 40-odd years up ladders.

The old guard are forever popping by to say ‘hello’, lend a hand and assure the young blood that, after trying every cleaning solution going, water is still the best.

So it seems a crying shame that, thanks to jobsworths at Westminster City Council, the lamps — many of which are grade II-listed — are under threat.

How you can support the campaign

Even those down the Mall, or the ones twinkling at Westminster Cathedral and in front of Jacob Rees-Mogg’s townhouse — they’re all in danger. Some have been going since the reign of George IV in the early 1800s. Yet all 275 lamp heads on Westminster’s patch are to be replaced with LED lights that ‘very closely mimic the originals in style’.

Why? Well, to be honest, it’s rather hard to understand the rationale behind the decision. One minute it seemed to be to do with global warming — but, clumped together, all the threatened lamps produce the equivalent CO2 of just 40 patio heaters. Hardly world-changing stuff.

So the council changed tack: it’s about cutting costs, they said. But then it was pointed out that replacing them is anticipated to cost between £3 million and £6 million. 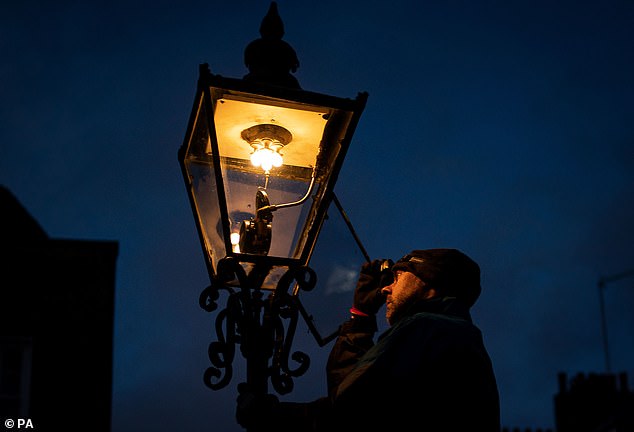 Even those down the Mall, or the ones twinkling at Westminster Cathedral and in front of Jacob Rees-Mogg’s townhouse — they’re all in danger 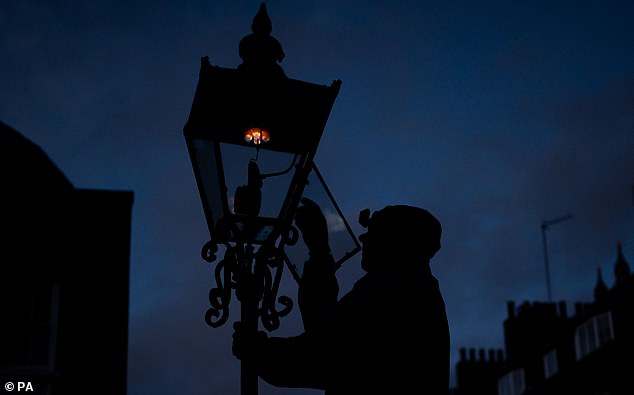 There’s also been mention of ‘vehicle safety’ — on the grounds that, every so often, oversized lorries damage the lamps.

Oh, and then there’s ‘street safety’ — apparently the lamps leave too many dark corners on our streets, however atmospheric these might be. Or perhaps it is all about progress and modernisation. But whatever the reason, none of it stands up.

It didn’t help Westminster’s cause that, during lockdown, despite the fact many of the lamps are listed and without any consultation whatsoever, they ripped out about 30 — some were spotted being hurled into the back of a truck — and replaced with glaring LED replacements. 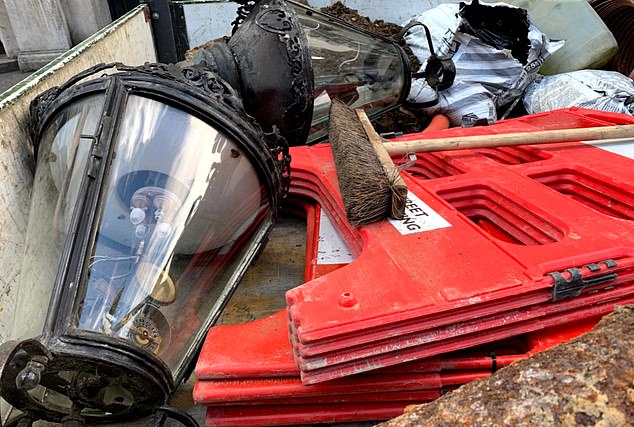 It seems a crying shame that, thanks to jobsworths at Westminster City Council, the lamps — many of which are grade II-listed — are under threat

Little wonder there’s been a furious backlash. Leading the charge against the lamps’ full destruction is a group called the Gasketeers, set up by Tim Bryars and Luke Honey and supported by actors Griff Rhys Jones and Simon Callow, who are doing everything in their power to mobilise support for the lamps before the public consultation deadline expires tomorrow night.

Last weekend, Griff wrote a powerful appeal in the Mail, imploring the council not to ‘let the lamps go out in London’.

The movement started in July 2021 when antiquarian bookseller Tim Bryars stepped out of his front door in Cecil Court, Covent Garden, and saw workers digging a massive hole beside his nearest lamp. Workers said they were checking to see if the lamps, which are believed to date from the 1890s, could easily be converted to electric. Tim went bananas.

Because, as well as casting streets in a soft, rich glow — and looking nice outside his shop — the lamps are part of our heritage. Before they existed, London was a dark and dangerous city. Unlit, awash with predators. Those who couldn’t afford to be guided through the smoggy air by a ‘link boy’, leading the way with a torch wick, had to take their chances or dash home before sunset.

Then, in 1807, and to mark the birthday of King George III, an engineer called Frederick Winsor lit a line of gas lamps in Pall Mall. 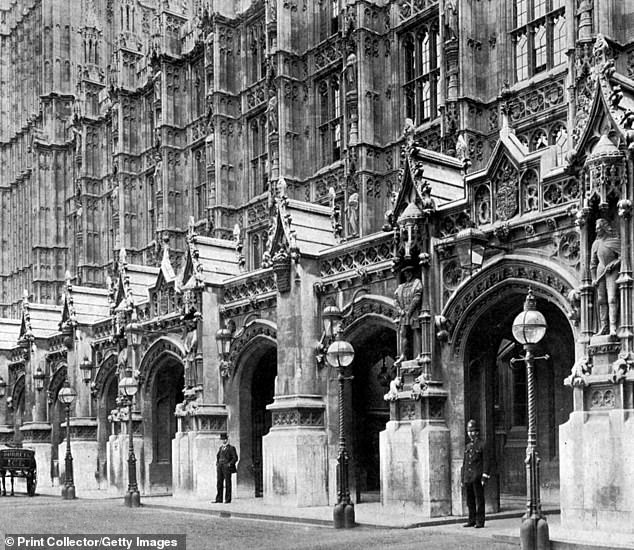 Because, as well as casting streets in a soft, rich glow — and looking nice outside his shop — the lamps are part of our heritage (Pictured: New Palace Yard, Westminster, London, 1905)

Such was the wonder, magic and awe, that the Mall was rammed full with spectators half the night.

It marked the end of the darkness — and a lot of related crime — and over the following decades thousands of gas lamps went up across London and the world.

Soon there were hundreds of lamplighters dressed in smart suits, working to keep the city lit. Today’s team of five — in their caps and waterproof jackets — have been employed by British Gas for more than 20 years. All are highly-trained gas boiler engineers, having waited years for a vacancy on the elite lamplighter team.

‘We were desperate for these jobs,’ says Paul Doyle, 47, who waited two decades before he beat a field of applicants for the job.

Stuart Cameron, 52, trained 30 years ago with the lamplighter team and then serviced boilers for 28 years, praying for an opening.

‘It’s a dead man’s shoes,’ explains Paul. ‘You have to wait and wait. No one ever leaves, because it’s the best job in the world.’

They often work longer than their prescribed hours, rotating their rounds and visiting every lamp once a fortnight.

Each has a different patch. Aran is in the Royal Parks, where he loves to chat to tourists. Paul is based in Covent Garden, where he arrives at dawn. And Stuart is in Hyde Park. 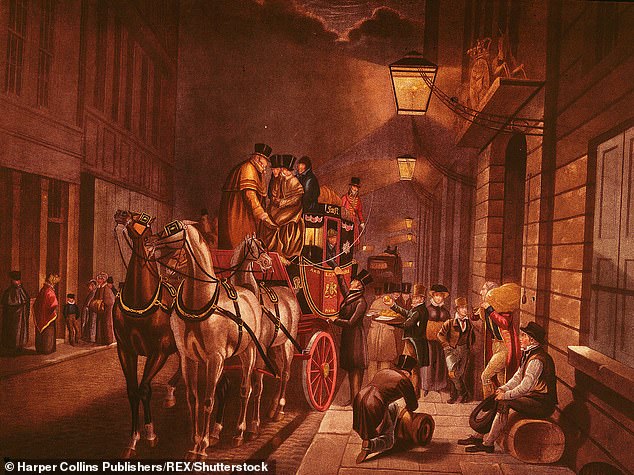 ‘These are our babies! For me there are two on the Duke of York steps that I love and I keep them really, really nice,’ says Aran.

The job is a mix of engineering, winding, polishing, rescuing lamps smashed by clumsy lorries and taking them to their workshop in Battersea, where they rebuild them.

‘We lost two, maybe three, last week at Winter Wonderland — all those forklift trucks,’ says Aran. ‘But we can fix them!’

In the run up to the Queen’s funeral, they worked round the clock to ensure all the lamps were at their best.

‘Nine days on the trot,’ says Paul. ‘And through the night as the funeral rehearsals took place in the dark. It was a big day in our diary.’

The old guard came back to lend a hand and, together, in St James’s Park, they swaddled a single lamp in black ribbon as a mark of respect. But even in normal times, they work long hours — often in darkness, and in any weather.

‘We’ve got coats, we’re fine,’ says Aran. ‘And people are constantly offering to buy us coffees.’

For the really tall lamps — up to 25ft — they use a cherry picker but, mostly, it’s just good old ladders lashed to the poles. As I discover when I wobble 12 ft up in the air to have a look. Clearly these lads have a good sense of balance — and a strong stomach for heights!

‘You must never look down,’ says Aran. ‘It takes a week to get used to it and it still sometimes catches you on a Monday morning.’

And when they’re not on duty?

Of course, they’re still thinking about their beloved lamps. All have pictures of them on their phones.

When they watch Harry Potter with their kids or all manner of other films, they’re forever pointing out their lamps. And on days out with their families, they love to squeeze in diversions to point out their favourites.

‘My wife rolls her eyes a lot,’ laughs Paul.

Currently, it is only Westminster City Council that wants to rip them out. It seems so crazy. In Berlin and Prague, where whole areas are lit with gas lamps, they’re putting more in.

Not surprisingly, the prospect is almost too much for these lovely chaps to handle.

‘It would be devastating. Totally devastating,’ says Paul. ‘I’ve written to the King. I haven’t heard back yet, but I wrote: ‘Part of your heritage is going to be thrown away, Sir. You must step in and stop it.’ He worries about keeping old trades alive, but we’re the last five. Once we’re gone, that’s it.’ 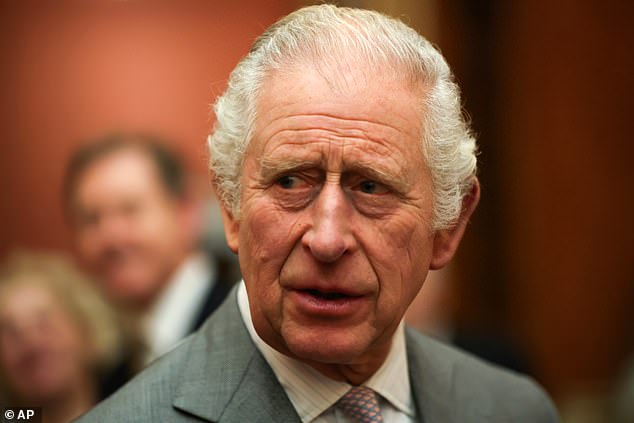 Paul Doyle, 47, wrote to the King, in a letter saying: ‘Part of your heritage is going to be thrown away, Sir. You must step in and stop it.’

‘It’s become quite emotional for us,’ adds Aran, his chirpy voice suddenly muffled.

‘Westminster is where gas lights started! Street lamps from around the world started here. We’re not just engineers, we’re the custodians of the lights.’

So what if, God forbid, Westminster Council fails to see sense, and rips them out anyway?

‘It’ll be bright LED everywhere, and I expect we’ll go back to repairing central heating systems,’ says Aran, sadly. ‘And there’s nothing romantic and historical about mending boilers.’

What did Eric Clapton say about the Covid-19 vaccine?