Tokyo: Dozens of Japanese towns have abandoned plans to accept overseas athletes competing in the Olympics from July due to concerns about inadequate resources amid a fourth wave of coronavirus infections, the Nikkei newspaper reported on Thursday.

Of 528 towns registered to welcome international competitors, about 40 have decided not to accept athletes for training camps and cultural exchanges before the global sporting showpiece, the Nikkei reported citing a government source.

Ibaraki prefecture Governor Kazuhiko Ooigawa said he rejected the Tokyo Olympics Organising Committee’s request to secure hospital beds for the athletes as the prefecture had to prioritise citizens over athletes. 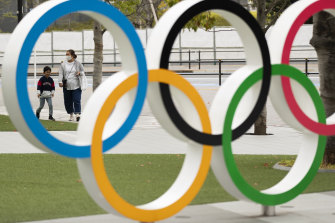 A mother and a boy walk by a display of the Olympic rings at the Japan Olympic Museum in Tokyo.Credit:AP

He has said a further postponement of the Games – which was originally due to be held last year – or outright cancellation should be considered if the pandemic worsened.

The United States’ track and field team has cancelled its pre-Olympics training camp in Japan out of concerns for their safety during the pandemic, the eastern prefecture of Chiba said on Wednesday.

The International Olympic Committee downplayed concerns over Japanese public opinion calling for the Games to be cancelled, overnight.

“We listen but won’t be guided by public opinion,” IOC spokesman Mark Adams said, adding “everything is telling us … that the games can go ahead and will go ahead.”

Adams stood in for his boss, IOC president Thomas Bach, whose planned visit to Japan next week was called off after states of emergency in Tokyo and other regions were extended through May.

Japan and the government have also repeatedly vowed to hold the Games as scheduled from July 23 to August 8, despite rampant criticism.

The government has been criticised for not locking down the economy hard enough and bungling the vaccine rollout, with only 2.8 per cent of the population inoculated, the lowest rate among wealthy countries.

To forestall a virus outbreak during the event, Japan is preparing to offer vaccinations to about 2500 Olympic and Paralympic athletes and support staff, using donated shots.

Pence: Trump got the ‘impression’ that past presidents wanted wall

How to get rid of bed bugs, what causes an infestation and how to treat bites – what you need to know