A senior Cabinet minister blasted ‘racist and extremely serious’ criminal anti-Semitism today after a week of shame on Britain’s streets.

Communities Minister Robert Jenrick lashed out at the treatment of British Jews by people furious at the actions of the Israeli military in attacking Gaza.

As the tensions in the Middle East spilled over into cities around the world there were appalling scenes in London yesterday.

Most notably they included a convoy of pro-Palestinian supporters visiting areas with large Jewish communities while shouting vile abuse and rape threats.

Taking an Urgent Question in the Commons today Mr Jenrick said: ‘No-one could fail to be appalled by the disgraceful scenes of anti-Semitic abuse being directed at members of the Jewish community in the past week.

‘In Chigwell, Rabbi Rafi Goodwin was hospitalised after being attacked outside his synagogue. In London, activists drove through Golders Green and Finchley, both areas with large Jewish populations, apparently shouting anti-Semitic abuse through a megaphone.

‘These are intimidatory, racist and extremely serious crimes.’

He also lashed out at councils and universities who have so far failed to adopt the International Holocaust Remembrance Alliance definition of anti-Semitism, threatening to name and shame them.

He revealed that all but one MP has already signed up to the code – but did not reveal who it is. 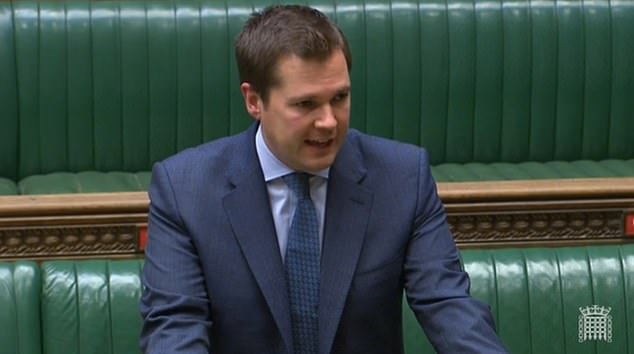 Communities Minister Robert Jenrick lashed out at the treatment of British Jews by people furious at the actions of the Israeli military in attacking Gaza. 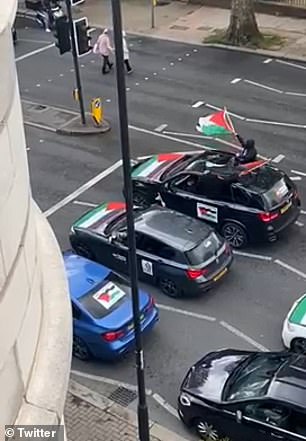 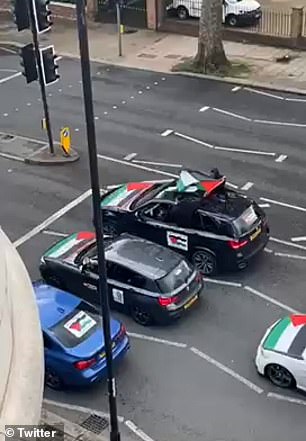 A convoy of cars bearing the Palestinian flag drove through a Jewish community in north London yesterday while the passengers screamed ‘f*** their mothers, f*** their daughters 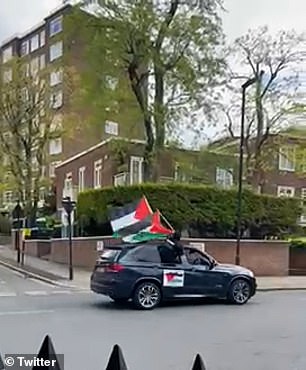 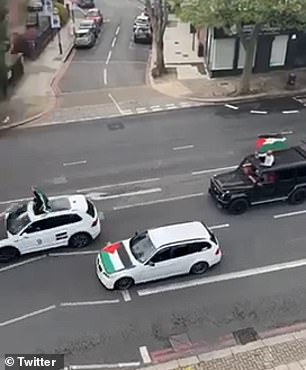 Tory MP Michael Fabricant has been criticised for describing pro-Palestine demonstrators clashing with police as ‘primitives’.

Anti-racism campaign Hope Not Hate called for the Conservative Party to suspend the backbencher on Sunday, accusing him of ‘hateful racism that stirs up division’.

Largely peaceful demonstrations took place across the UK over the weekend in solidarity with the people of Palestine, as Israel and Hamas exchange rocket fire in a deadly conflict.

The MP for Lichfield shared a video of clashes with police outside the Israeli Embassy in London on Saturday.

He tweeted: ‘These primitives are trying to bring to London what they do in the Middle East.’

Mr Fabricant deleted the message after it drew criticism on social media.

Hope Not Hate said: ‘The tense situation requires steady leadership from people who want to bring communities together, not hateful racism that stirs up division. The Conservatives must suspend Michael Fabricant for this disgraceful comment.’

Director of the British Future think-tank Sunder Katwala tweeted: ‘Anybody who realises that it is racist to hold British Jews responsible for Israeli policy should also be able recognise the racism here in Michael Fabricant’s tweet.’

Mr Fabricant sought to justify the comments, saying that ‘attacks on the British police as shown in the video are disgraceful’.

He told the PA news agency: ‘It is primitive behaviour by people who preach anti-Semitism or racism of any kind, whether they be Jewish, Christian or Muslim.

‘And the sort of anti-Semitism displayed by Hamas in the Middle East must not be repeated here in the UK.’

Mr Fabricant’s remarks came as video from a separate demonstration in the capital appeared to show anti-Semitic abuse being shouted from a car on Sunday in footage that drew criticism from across the political spectrum, including from Boris Johnson.

‘There is no place for antisemitism in our society,’ the Prime Minister tweeted.

The Metropolitan Police said nine officers were injured as they attempted to disperse crowds outside the embassy on Saturday and 13 arrests were made.

The Conservative Party is yet to respond to a request for comment.

Earlier it had been revealed that the convoy that struck in London had  travelled 200 miles from Bradford in West Yorkshire.

The news emerged as police stepped up patrols at synagogues and city mayor Sadiq Khan said there was ‘no excuse’ for racism.

Onlookers were left horrified after the passengers yelled: ‘F*** the Jews… F*** all of them. F*** their mothers, f*** their daughters and show your support for Palestine. Rape their daughters and we have to send a message like that. Please do it for the poor children in Gaza.’

The Convoy 4 Palestine began in Bradford before passing Sheffield and Leicester on the route to London. One of the men inside the car where the abuse was coming from had a shirt reading ‘Blackburn’.

The Community Security Trust, a charity that monitors the security of the Jewish community, said the car rally had travelled down from Bradford on Sunday morning to attend a protest about Israel’s ongoing military actions against Hamas in the Gaza Strip.

The incident on Finchley Road happened at around 6.30pm. It is not known if the perpetrators of the abuse were themselves from Bradford.

Mr Jenrick told the Commons that four arrests have been made in connection with the north London incident and that ‘anti-Semitism has no place in our society’.

He told MPs: ‘During Shavuot, as always, we stand with our Jewish friends and neighbours who have sadly been subjected to a deeply disturbing upsurge in anti-Semitism in recent years – particularly on social media.

‘Like all forms of racism, anti-Semitism has no place in our society.

‘A lot of young, British Jews are discovering for the first time that their friends don’t understand anti-Semitism, can’t recognise it and don’t care that they are spreading it.

‘They are not responsible for the actions of a Government thousands of miles away but are made to feel as if they are. Seeing their friends post social media content that glorifies Hamas, an illegal terrorist organisation – an organisation whose charter calls for every Jew in the world to be killed.’

Mr Jenrick continued: ‘Every time the virus of anti-Semitism re-enters our society it masks itself as social justice, selling itself as speaking truth to power. This Government is taking robust action to root it out.’

Mr Khan, who was recently re-elected as Mayor of London, told BBC Radio 4’s Today programme this morning: ‘Many of us feel quite strongly about what’s happened in Israel and Gaza, what we can’t do is use that as an excuse for any kind of anti-Semitism or hate crime.’

The mayor said he has been in contact with the Metropolitan Police Commissioner and the Deputy Commissioner and there will be an increased police presence in Jewish communities, synagogues and schools with the aim of trying to make people feel safe, but also to alert ‘anybody who is involved in any race crimes that action will be taken’.

He added: ‘It is important for us to realise the impact of this criminal behaviour has a ripple of fear effect on Jewish Londoners and those across the country. It is really important that we don’t bring conflicts 3,000 miles away to the capital city.’

Trump, IRS and Pentagon subpoenaed over spending at his D.C hotel