NEW YORK — Jesse Williams vowed not to be discouraged after leaked video and images of his onstage nude scene in the Broadway play “Take Me Out” were posted online.

“I’m not down about it. Our job is to go out there every night, no matter what,” Williams told The Associated Press on Thursday.

The leaked video and images prompted an outcry from the show’s producers and the union that represents actors and stage managers.

“I’m not really worrying about it. I can’t sweat that. We do need to keep advocating for ourselves. And it’s wonderful to see a community push back and make clear what we do stand for, what we don’t,” Williams said. “Consent is important, I thought. So, let’s keep that in mind universally." 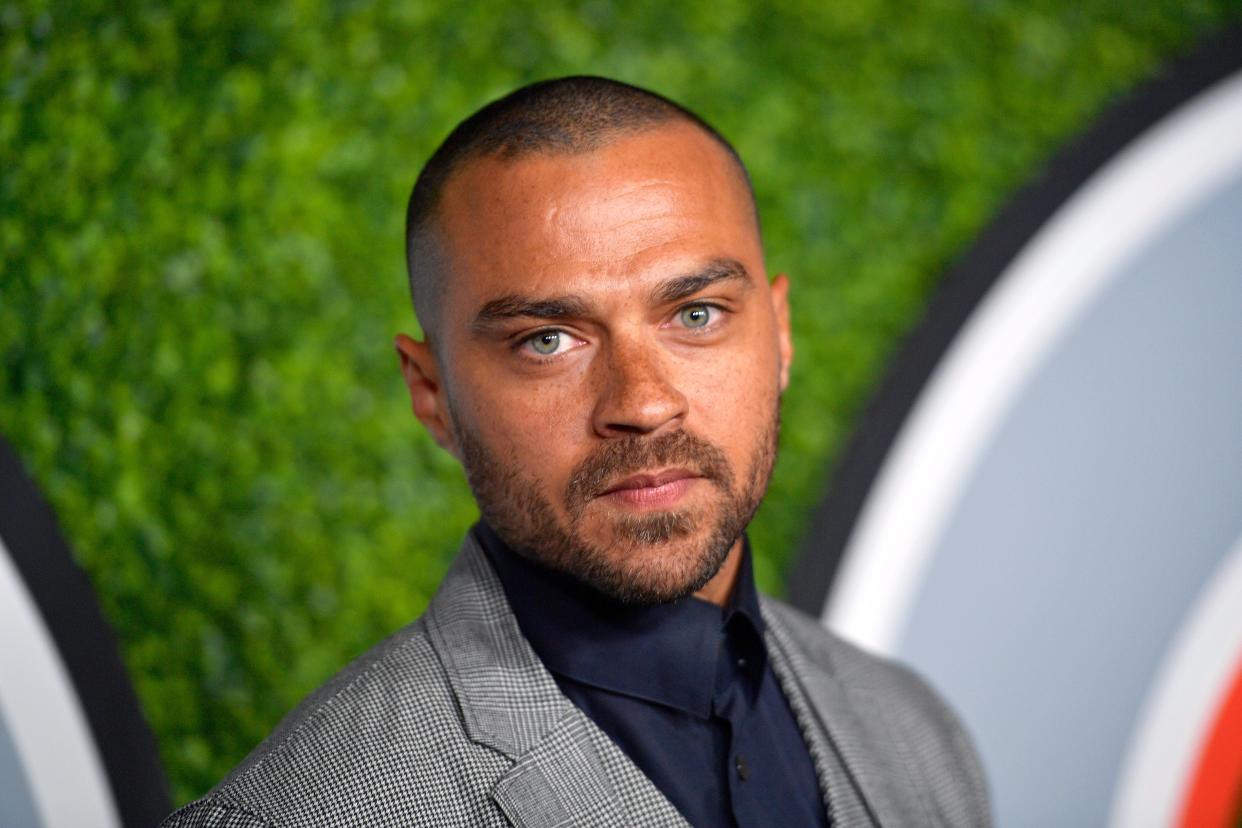 Original story: 'Everybody makes such a big deal': Tony-nominated Jesse Williams talks being nude on Broadway

Williams plays queer baseball player Darren Lemming, struggling with the aftermath of coming out, in the revival of Richard Greenberg’s "Take Me Out."

"Take Me Out" won a Tony Award for best play during its initial run in 2003. Williams may score the Broadway play another Tony in 2022. The "Grey's Anatomy" star received a Tony-nomination Monday for best performance by a featured actor in a play. He is up against his "Take Me Out" co-stars Ferguson and Michael Oberholtzer in the same category.

The incident happened at Hayes Theater, which is owned by Second Stage Theater, who produces the "Take Me Out" revival. Despite the New York City venue's policy that requires use of Yondr bags to lock up patrons' phones, one person apparently snuck theirs in during production of the Tony Award-nominated show. On Monday night, videos and images of Williams began circulating online.

Producers said they would beef up security in the wake of the violation.

“Theater is a sacred space, and everybody doesn’t understand that. Everybody doesn’t necessarily respect or regard that in a way that maybe they should, or we’d like,” Williams said.

Williams says he was approached to do the revival of the play while starring on the long-running medical drama, “Grey’s Anatomy,” but it wasn’t until after he read the script that he realized it included nudity.

“If somebody had just said it’s (a) play with nudity, it would have been framed differently. But the nudity is honest. It makes sense. It’s not salacious. It serves the story. It puts the audience in an interesting position to relate to empathize with the characters,” Williams said.

The leaked video is the latest incident in which the privacy or well-being of a performer was put in jeopardy, following Will Smith’s Oscar slap of Chris Rock and when Dave Chapelle was attacked by a man at the Hollywood Bowl. 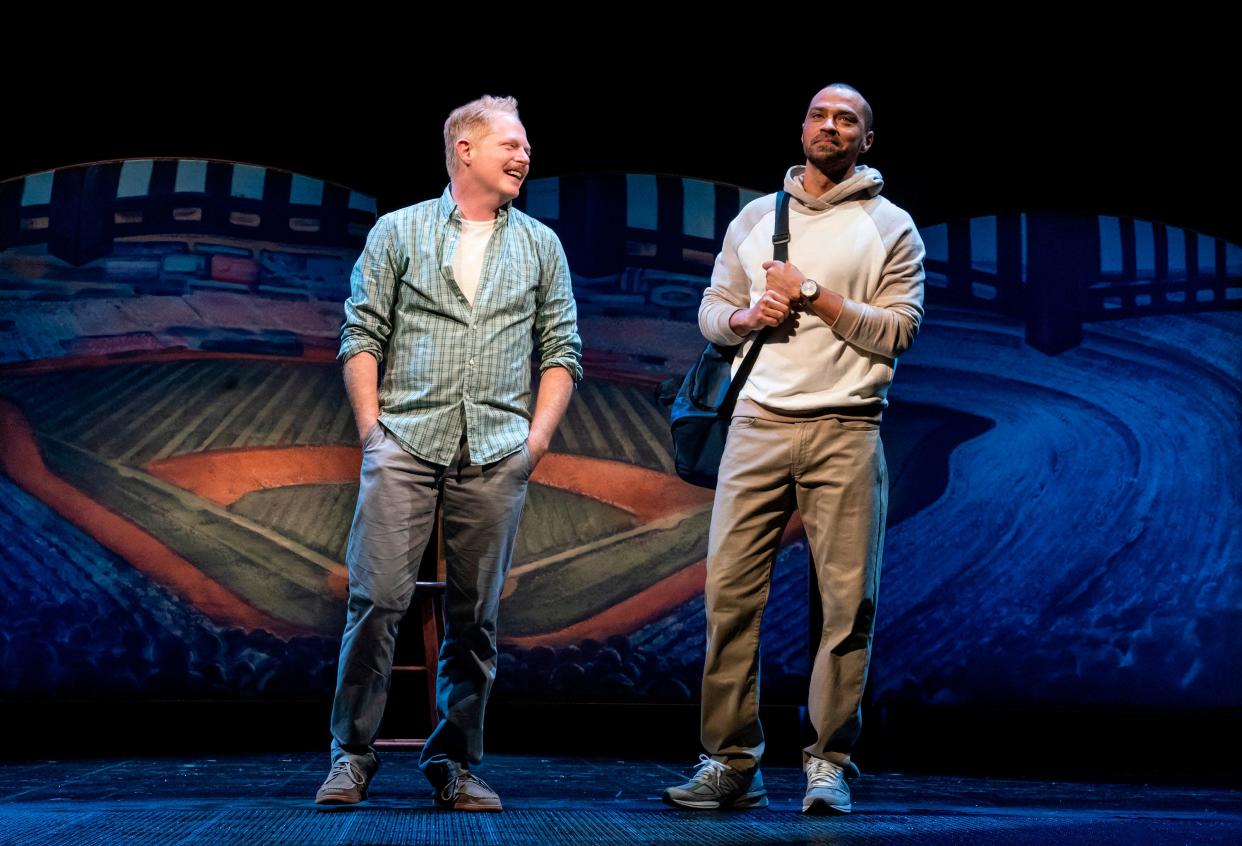 One of Williams’ co-stars, Michael Oberholtzer, who also earned a Tony nomination on Monday, called the incident “very disappointing.”

“People feel like that they can say and do things because they pay for admission or because they are a subscription member or whatever the case may be, that certain behavior is permissible. But it’s not. It’s a violation of people’s consent,” Oberholtzer said.

Fellow "Take Me Out" co-star Jesse Tyler Ferguson, as well as Second Stage Theater and the Actors’ Equity Association also condemned the audience member who recorded the scene.

Cast members speak out: Jesse Tyler Ferguson says he's 'appalled' by leak of Jesse Williams nude in 'Take Me Out'

On Tuesday, Ferguson slammed the audience-goer for their "disrespect" to the cast and crew of the show. "I’m appalled by the disrespect shown to the actors of our company whose vulnerability on stage (every) night is crucial to 'Take Me Out,' " Ferguson wrote on Twitter.

He continued: "Anyone who applauds or trivializes this behavior has no place in the theater which has always been a safe space for artists & audience members."

The "Modern Family" star also noted that if nudity is the only reason people would attend the show, "you are in for a boring night." He quipped that audience-goers would also have to sit through "big ideas, beautiful language and remarkable acting."

I'm appalled by the disrespect shown to the actors of our company whose vulnerability on stage ever night is crucial to Take Me Out. Anyone who applauds or trivializes this behavior has no place in the theater which has always been a safe space for artists & audience members. https://t.co/eYEqbQBrc6

Second Stage Theater released a similar statement Tuesday, noting they are working to have the video removed from various platforms and that they will have more staff circulating during the performances to ensure no further recordings are made.

"It is deeply unfortunate that one audience member chose to disrespect the production, their fellow audience members and, most importantly, the cast in this manner," the statement said.

"Taking naked pictures of anyone without their consent is highly objectionable and can have severe legal consequences. Posting it on the internet is a gross and unacceptable violation of trust between the actor and audience forged in the theatre community."

This article originally appeared on USA TODAY: Jesse Williams on 'Take Me Out' Broadway nude leak

On-the-spot coronavirus tests set to be rolled out