Fort Lauderdale: A jury has spared Florida school shooter Nikolas Cruz from the death penalty for killing 17 people at a Parkland high school in 2018, sending him to prison for the remainder of his life in a decision that left many families of the victims angered, baffled and in tears.

The jury’s recommendation on Thursday (Florida time) came after seven hours of deliberations over two days, ending a three-month trial that included graphic videos, photos and testimony from the massacre and its aftermath, heart-wrenching testimony from victims’ family members and a tour of the still blood-spattered building. 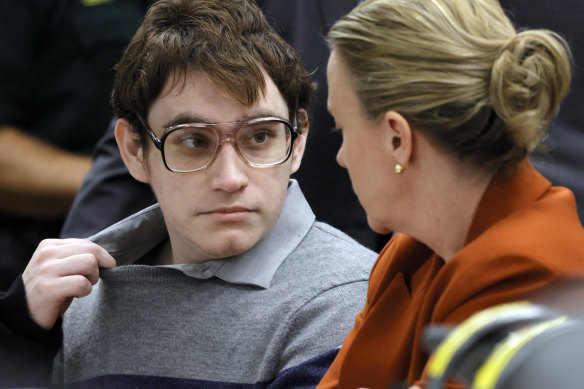 “We are beyond disappointed with the outcome today,” Lori Alhadeff, whose daughter, Alyssa was killed, said at a news conference after the jury’s decision was announced.

“This should have been the death penalty, 100 per cent. Seventeen people were brutally murdered on February 14, 2018. I sent my daughter to school and she was shot eight times. I am so beyond disappointed and frustrated with this outcome. I cannot understand. I just don’t understand.”

Under Florida law, a death sentence requires a unanimous vote on at least one count. Circuit Judge Elizabeth Scherer will formally issue the life sentences November 1. Relatives, along with the students and teachers Cruz wounded, will be given the opportunity to speak at the sentencing hearing.

Cruz, his hair unkempt, largely sat hunched over and stared at the table as the jury’s recommendations were read. Rumblings grew from the family section — packed with about three dozen parents, spouses and other relatives of the victims — as life sentences were announced. Many shook their heads, looked angry or covered their eyes, as the judge spent 50 minutes reading the jury’s decision for each victim. Some parents sobbed as they left court.

Tony Montalto, father of Gina Montalto, said: “How can the mitigating factors make this shooter, who they recognised committed this terrible act — acts, plural — shooting, some victims more than once on a pass, pressing the barrel of his weapon to my daughter’s chest. That doesn’t outweigh that poor little what’s-his-name had a tough upbringing?”

“Our justice system should have been used to punish this shooter to the fullest extent of the law.”

Cruz, 24, pleaded guilty a year ago to murdering 14 students and three staff members and wounding 17 others on February 14, 2018. Cruz said he chose Valentine’s Day to make it impossible for Stoneman Douglas students to celebrate the holiday ever again. 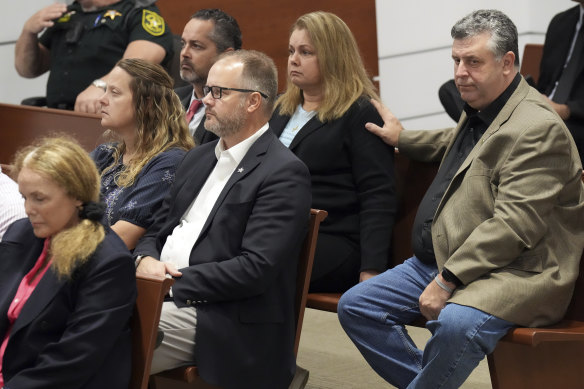 Tony Montalto, seated with his wife, Jennifer, reacts during the reading of jury instructions in the penalty phase of the trial of Marjory Stoneman Douglas High School shooter Nikolas Cruz.Credit:AP

The massacre is the deadliest mass shooting that has ever gone to trial in the US. Nine other people in the US who fatally shot at least 17 people died during or immediately after their attacks by suicide or police gunfire. The suspect in the 2019 massacre of 23 at an El Paso, Texas, Walmart is awaiting trial.

Lead prosecutor Mike Satz kept his case simple for the seven-man, five-woman jury. He focused on Cruz’s eight months of planning, the seven minutes he stalked the halls of a three-story classroom building, firing 140 shots with an AR-15-style semi-automatic rifle, and his escape.

He played security videos of the shooting and showed gruesome crime scene and autopsy photos. Teachers and students testified about watching others die. He took the jury to the fenced-off building, which remains blood-stained and bullet-pocked. v gave tearful and angry statements. 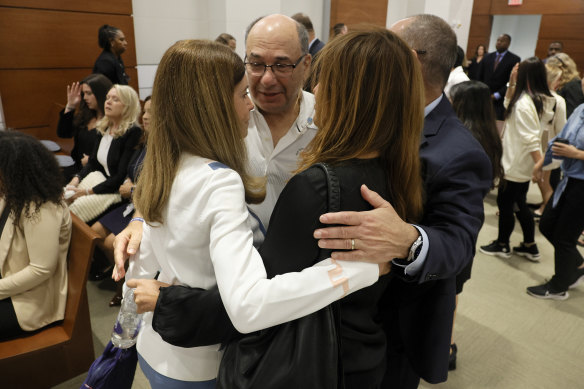 Linda Beigel Schulman, Michael Schulman, Patricia Padauy Oliver and Fred Guttenberg, families of the victims, embrace in the courtroom while waiting for an expected verdict.Credit:AP

Cruz’s lead attorney Melisa McNeill and her team never questioned the horror he inflicted, but focused on their belief that his birth mother’s heavy drinking during pregnancy left him with fetal alcohol spectrum disorder. Their experts said his bizarre, troubling and sometimes violent behaviour starting at age 2 was misdiagnosed as attention-deficit/hyperactivity disorder, meaning he never got the proper treatment. That left his widowed adoptive mother overwhelmed, they said.

The defence cut its case short, calling only about 25 of the 80 witnesses they said would testify. They never brought up Cruz’s high school years or called his younger half-brother, Zachary, whom they accused of bullying.

In rebuttal, Satz and his team contended that Cruz did not suffer from fetal alcohol damage but has antisocial personality disorder — in lay terms, he’s a sociopath. Their witnesses said Cruz faked brain damage during testing and that he was capable of controlling his actions, but chose not to. For example, they pointed to his employment as a cashier at a discount store where he never had any disciplinary issues.

Prosecutors also played numerous video recordings of Cruz discussing the crime with their mental health experts where he talked about his planning and motivation.

The defence alleged on cross-examination that Cruz was sexually molested and raped by a 12-year-old neighbour when he was 9.