The royal couple visited the Church of St Mary Magdalene on the estate for today’s service, days before Harry’s tell-all book is released.

The King, 74, was sporting a tweed, brown shoes and a patterned tie, while Camilla, 75, wore a dark coat decorated with a brooch as they greeted crowds outside.

The pair were reigniting the royal tradition of visiting the Church of St Mary Magdalene on the first day of the year.

It had fallen away following pandemic restrictions, and the decline in the late monarch’s health. 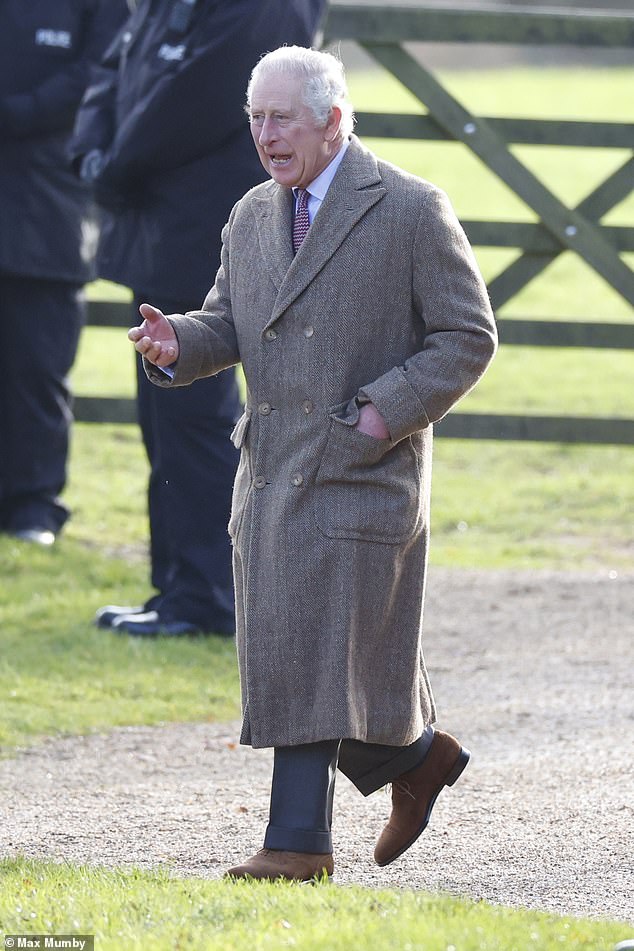 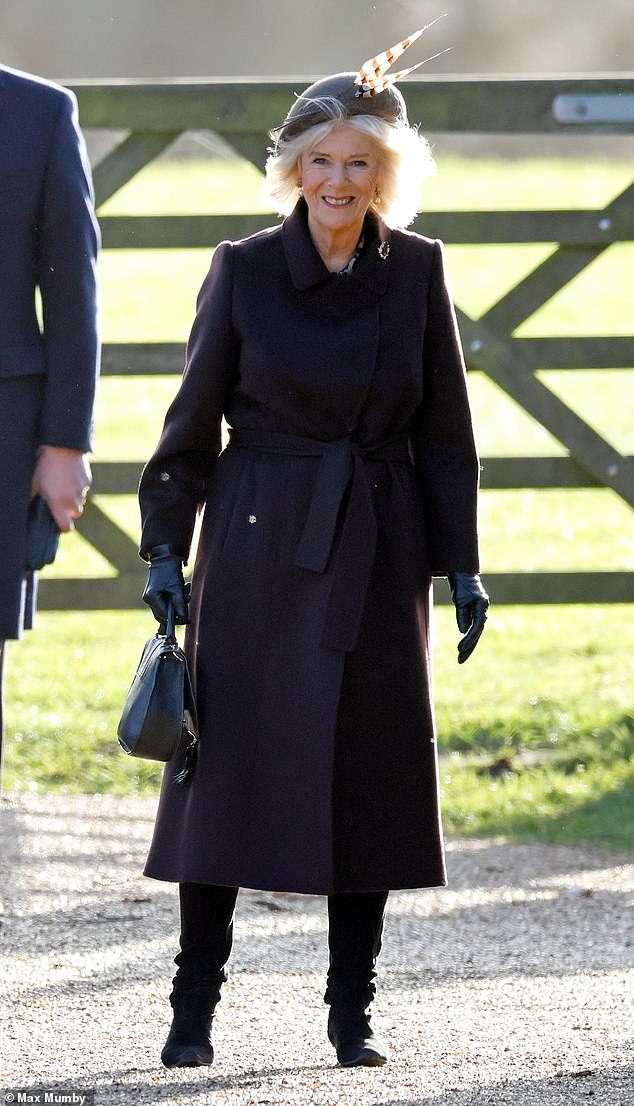 Meanwhile, Zara, 41, and Mike Tindall, 44, were pictured at Cheltenham Racecourse for New Year’s Day racing with their children Mia, eight, and Lena, four.

Last week, the Wales children captured the hearts of a nation on Sunday as they joined their parents and King Charles for his first Christmas walkabout as monarch.

Little Louis cheekily guided the Princess of Wales through the crowd and waved at the cameras, while his older siblings smiled politely and greeted the crowds which had gathered outside Sandringham church for a glimpse of the smallest royals.

George, Charlotte and Louis spoke with well wishers and received gifts from members of the public alongside William and Kate after their traditional Christmas Day church service on the Norfolk estate.

Among the crowd was Gemma Clark, 42, who travelled with her 72-year-old father Paul Clark from Long Sutton, Lincolnshire, and gave toys to the children. 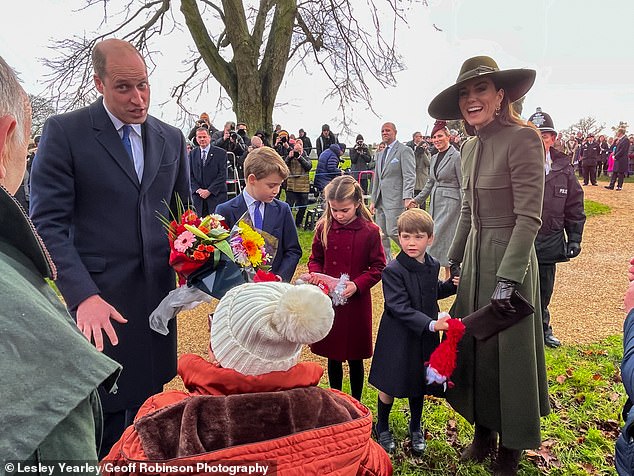 The Prince and Princess of Wales, along with their children George, Charlotte and Louis, speak with a member of the public outside St Mary Magdalene Church in Sandringham on Christmas Day 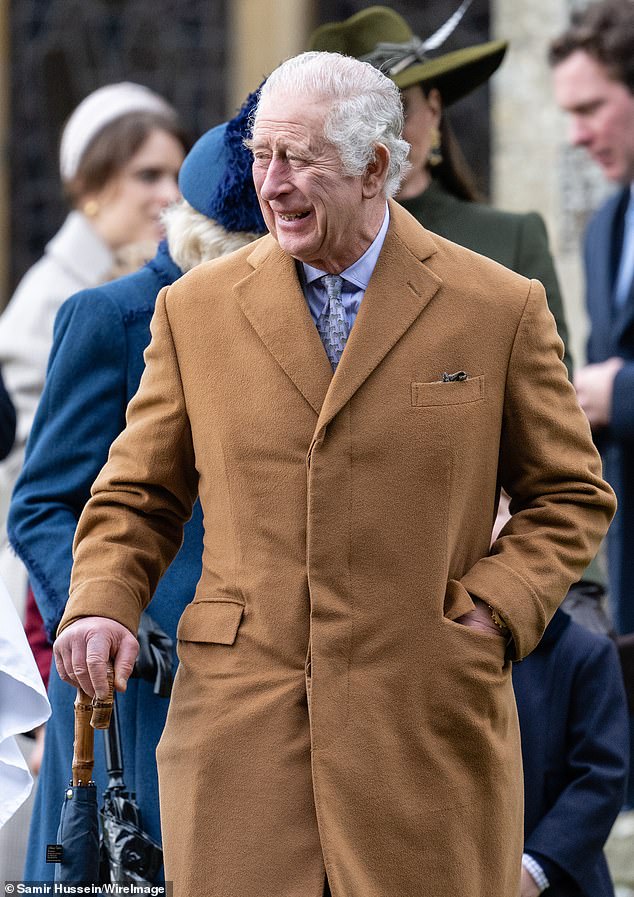 King Charles III laughs as he greets the public in Sandringham on Christmas day, meeting them as monarch for the first time as he attends the Sandringham service 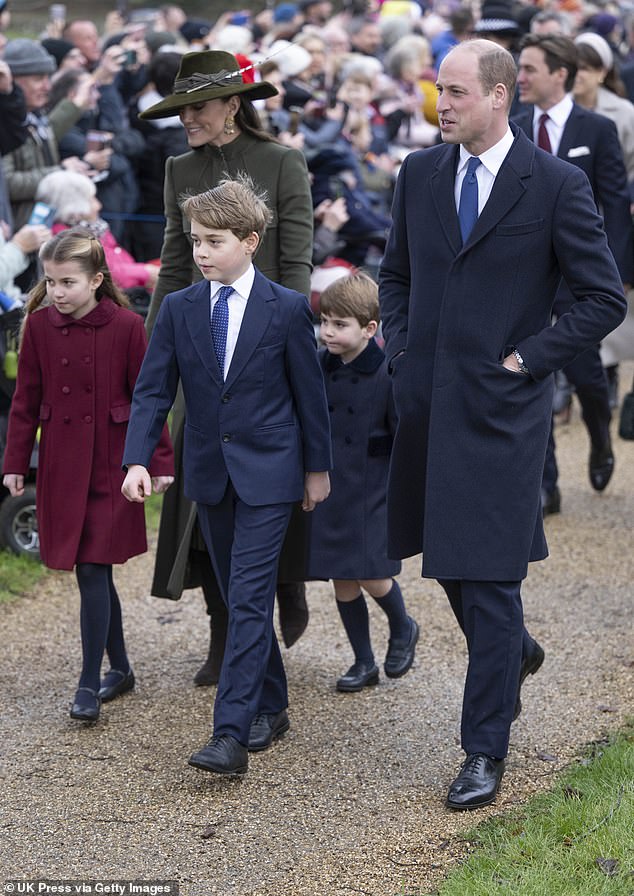 Ms Clark, who was in a wheelchair, said it was ‘absolutely brilliant’ to meet William and Kate and their three children on Christmas Day.

‘Prince Louis – I love Louis. He’s always cheeky, that Louis is, but I love him.’

She said she gave each of the three children a novelty toy called a gonk, which is like a festive gnome with a pointed hat. She also gave flowers to Kate.

And Louis seemed to enjoy the attention, getting so caught up in it he was at one stage forced to run to catch up with his big sister Charlotte.

Today’s visit to the church comes as the Royal Family braces itself for a fresh onslaught with Meghan Markle now set to release her own memoir, according to reports.

The Duchess of Sussex is said to be preparing a tell-all book, hot on the heels of Prince Harry’s upcoming autobiography, Spare.

His book will reportedly see King Charles III escape severe criticism, but is so tough on Prince William that insiders fear the brothers won’t be able to reconcile their relationship afterwards.

According to The Times, a source said: ‘Generally, I think the book [will be] worse for them than the royal family is expecting. 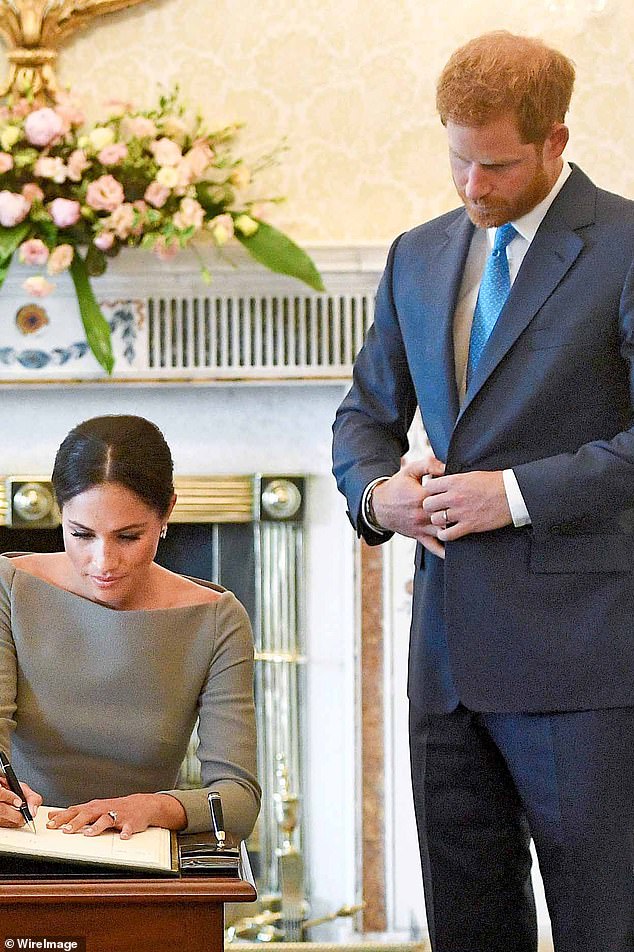 The Duchess of Sussex, pictured with her husband, is planning to write her own autobiography which will leave ‘no stone unturned’ about life as a royal according to sources in Hollywood 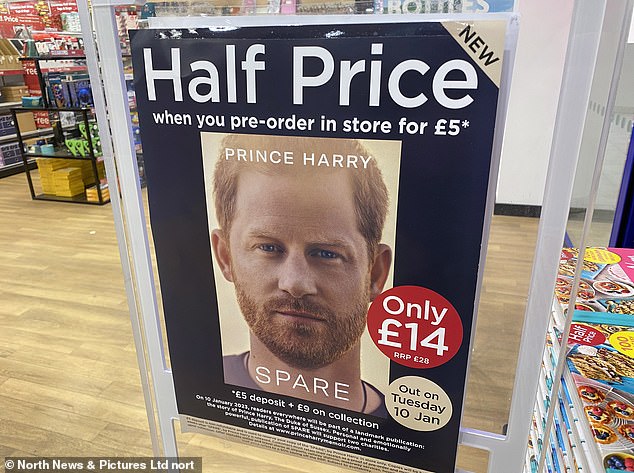 Prince Harry’s book, Spare, is due to be released on Tuesday, January 10

Abroad, Harry is The Other or Spare Wheel!

It is  one of the most eagerly anticipated books of 2023, but despite the dramatic title, In The Shadow isn’t the latest bestseller from Harlan Coben or Lee Child.

In fact En La Sombra is the Spanish translation of Prince Harry’s memoir, Spare. The title refers to his role as a spare Prince, unlike William who is heir to the throne.

In addition to its English editions, the book – due out on January 10 – has been translated into 15 other languages. The Dutch, Romanian and German editions translate the title as Reserve, while the Greek translation can also be the word for a car’s spare wheel.

The French title is Le Suppleant – or Substitute, while in Italian it is subtitled Il Minore – The Minor or The Younger.

Sweden’s version is Den Andre – The Second or The Other. Likewise, in Poland it is Ten Drugi – The Other One. Poignantly, in Brazil it is What’s Left Over. 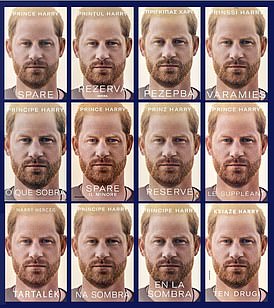 ‘Everything is laid bare. Charles comes out of it better than it had expected, but it’s tough on William, in particular, and even Kate gets a bit of a broadside. There are these minute details, and a description of the fight between the brothers. I personally can’t see how Harry and William will be able to reconcile after this.’

After the couple delivered a salvo of explosive claims in their recent Netflix series, Prince Harry’s new autobiography Spare is expected to stir up yet further controversy.

The series’ allegations of racism and unfair treatment of Meghan have left the Royal Family reeling, and the situation seems certain to worsen with the publication of Harry’s book in nine days’ time.

But now reports have emerged that Meghan is to publish her own bombshell memoir.

According to one source, the Duchess of Sussex ‘is contemplating getting entirely candid about her time in the Royal limelight… and leaving no stone unturned’.

In 2021 the couple reportedly signed a four-book deal with publishers Penguin Random House.

Prince Harry is said to have received a $20 million advance for Spare. Meghan has already released her children’s book The Bench with the same publisher, and it is rumoured that the couple are working on a ‘wellness’ book. Now it is believed the mystery fourth book will be Meghan’s autobiography.

A bestselling memoir would put Meghan in a well-trodden American political tradition, amid much speculation that she may have ambitions for elected office, given her outspoken views on women’s rights and other issues.

A Hollywood agent told The Mail on Sunday: ‘I would find it surprising if Meghan didn’t publish her own story, to be honest. Spare is clearly Prince Harry’s chance to tell his, but hers is equally compelling. I mean, how many actresses end up marrying a Prince?’

The source added: ‘If she’s harbouring political ambitions it would make even more sense,’ pointing out that Presidents Clinton, Obama and Trump all wrote books setting out their beliefs before launching bids for the White House. 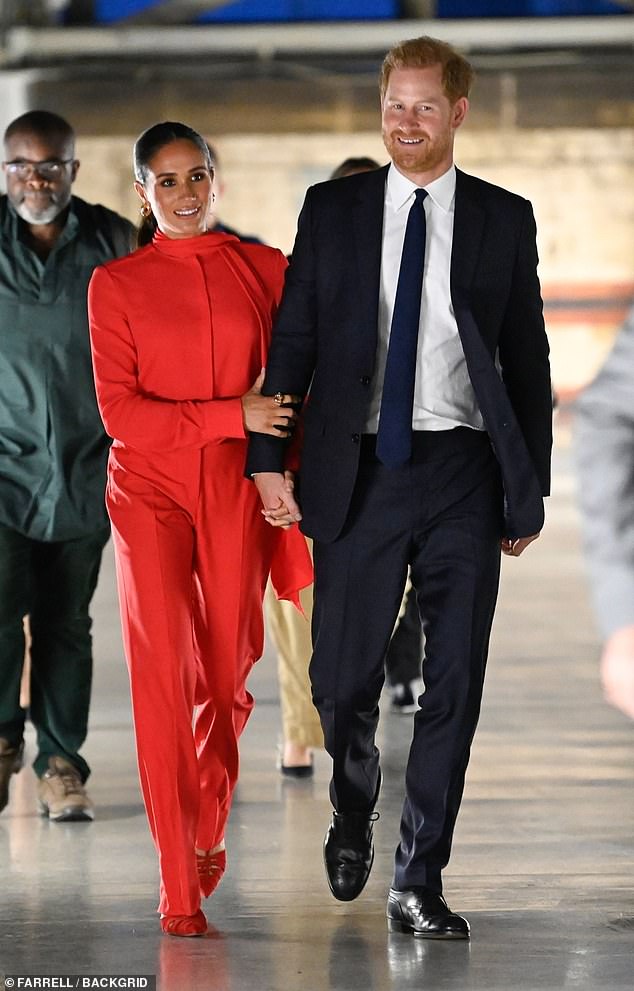 A bestselling memoir would put Meghan in a well-trodden American political tradition, amid much speculation that she may have ambitions for elected office, given her outspoken views on women’s rights and other issues 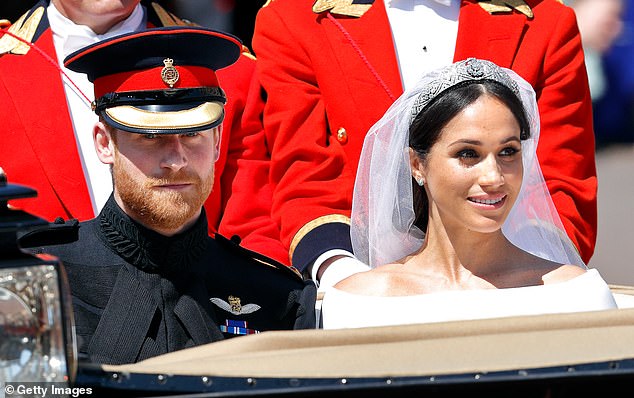 A Hollywood agent told The Mail on Sunday: ‘I would find it surprising if Meghan didn’t publish her own story, to be honest. Spare is clearly Prince Harry’s chance to tell his, but hers is equally compelling. I mean, how many actresses end up marrying a prince?’ 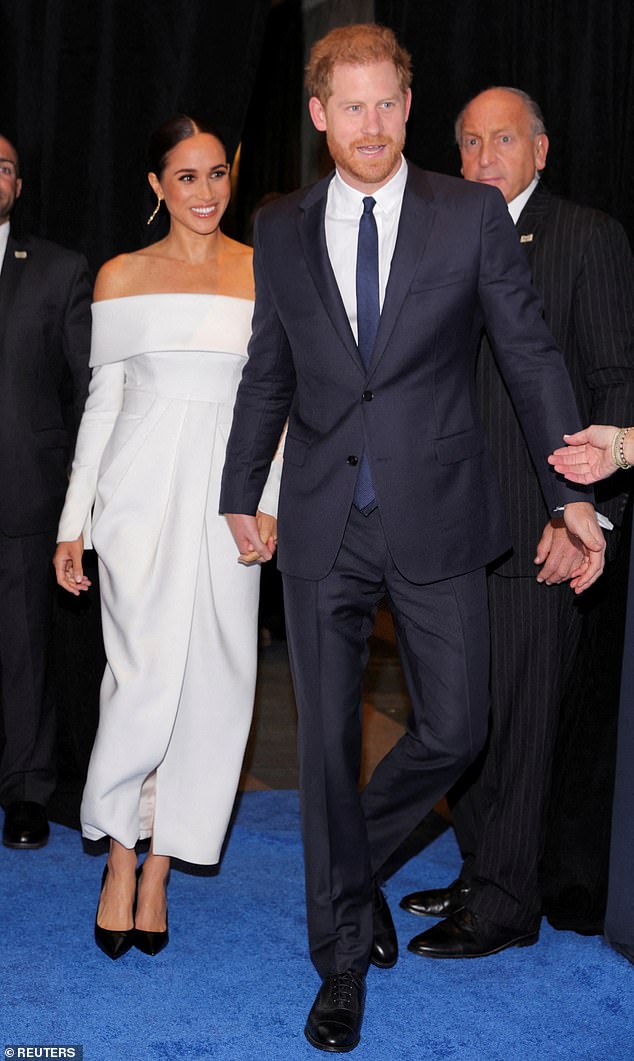 The agent added: ‘If she’s harbouring political ambitions it would make even more sense,’ the source added, pointing out that Presidents Clinton, Obama and Trump all wrote books setting out their beliefs before launching White House bids’

The Duchess, a Democrat, has become close to America’s ‘political royalty’, the Kennedy family, and was honoured last month alongside her husband with an award from the Robert F. Kennedy Human Rights non-profit organisation.

The organisation’s leader Kerry Kennedy – niece of former US president John F. Kennedy – said the Sussexes received the award for their stand against ‘structural racism’ within the Royal Family.

Meghan is also good friends with feminist icon Gloria Steinem who is still closely involved in liberal politics. A friend of Ms Steinem’s said: ‘Meghan has strong views very much in alignment with Gloria’s in terms of social justice and women’s rights. Gloria is encouraging her to make her voice heard.’

But some have warned that the Sussexes may be in danger of overexposure.

One senior Hollywood executive said: ‘We’ve had the Oprah Winfrey interview, then the Netflix series and now we’ve got Harry’s book. You have to ask if the world really needs to hear Meghan’s story right now? If I was advising her I would caution against releasing a book too quickly because there is a very real danger that people will start experiencing ‘Sussex fatigue’.

‘There comes a point where people might feel they’ve heard the same stories too many times. They have to change the narrative at some stage and focus on the future rather than past transgressions.’

Meanwhile, Harry’s book has been billed as being written with ‘raw, unflinching honesty’.

The Duke is set to launch a publicity blitz next Sunday with an interview on America’s flagship 60 Minutes show.

He will also be interviewed by ITV’s Tom Bradby in the UK.

This best-selling Ninja blender rarely ever goes on sale — until now, that is