The Monarch, 73, was overheard making the apparent gaffe during their meeting at Buckingham Palace yesterday.

Last month, the pair spoke briefly during a special audience following the death of Charles’s mother, the Queen.

But yesterday the pair met again for their first ever weekly audience – a tradition the Queen maintained throughout her 70-year reign.

However their once-a-week meetings got off to an eyebrow-raising start yesterday with Charles’s apparent gaffe – which was caught on camera.

The meeting started with Ms Truss, who is facing an avalanche of criticism over her tax policies, greeting the royal by saying: ‘Your Majesty. It is good to see you again.’

But Charles, seemingly looking to fill a brief awkward silence, then says: ‘Dear oh dear,’ before quickly following up with a ‘Now…’. 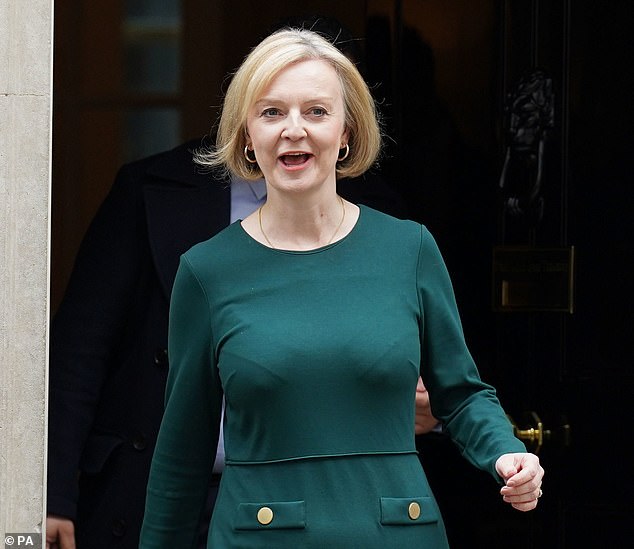 The meeting started with Ms Truss (pictured outside Downing Street yesterday), who is facing an avalanche of criticism over her tax policies, greeting the royal by saying: ‘Your Majesty. It is good to see you again.’

The incident came after Ms Truss faced Prime Minister’s Questions in Parliament, where she insisted she will not cut spending to balance the books as economists and the financial markets continued to question her plans.

Charles, meanwhile, welcomed the King and Queen of Malaysia to Buckingham Palace in his first meeting with the royals.

The new monarch’s meeting with the prime minister is an event that is held every Wednesday.

It takes place after she is quizzed by the leader of the opposition, Sir Keir Starmer, at Prime Minister’s Questions in the House of Commons.

The Queen conducted weekly meetings with all 15 Prime Ministers during her 70-year reign, including Winston Churchill, her first, and Ms Truss, who was her last.

While Charles will now continue to meet Ms Truss each week, his meetings with the Malaysian royals will be more of a rarity.

Yang Di-Pertuan Agong XVI and the Raja Permaisuri Agong this afternoon marked a much less frequent occurrence, with the King and Queen of Malaysia making their first visit to the UK for a year. 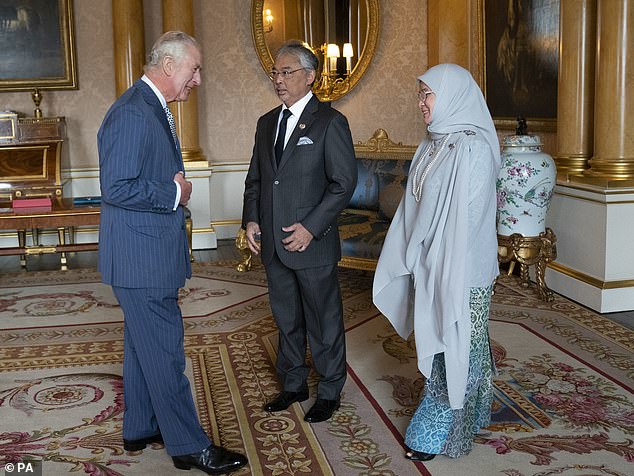 The King held an audience with Yang Di-Pertuan Agong XVI and the Raja Permaisuri Agong at Buckingham Palace this afternoon. 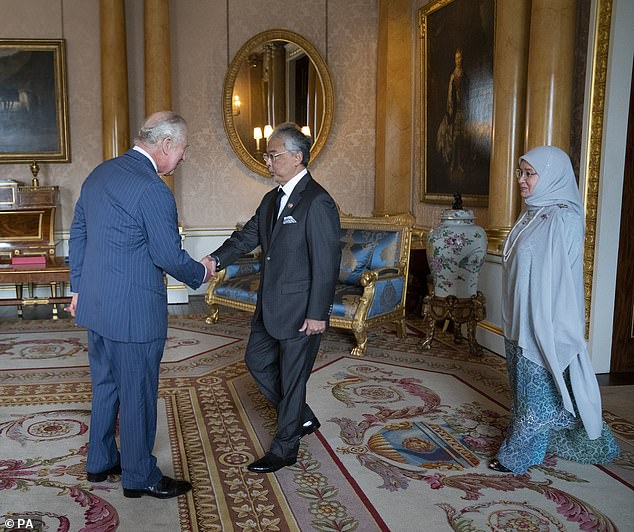 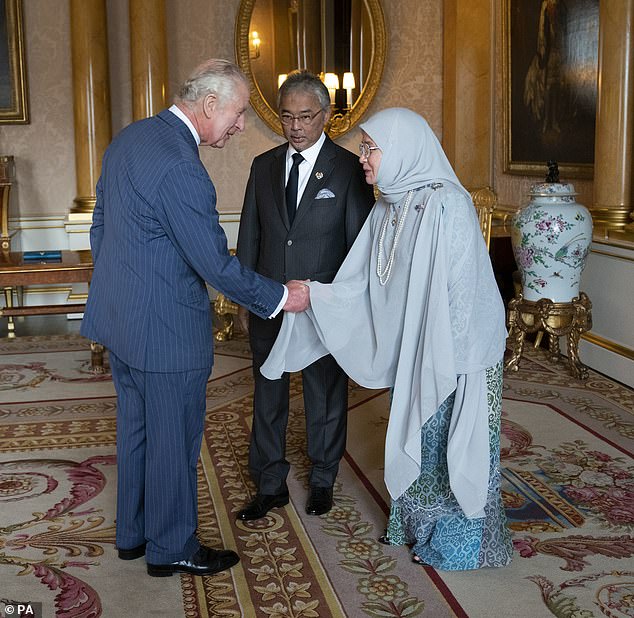 It was the King’s first engagement since his return to the UK from Scotland – where he spent three weeks with the Queen Consort following his mother’s funeral.

The King appeared in high spirits as he wore a pinstripe suit to greet the PM and the Commonwealth leaders.

Shaking hands with His Majesty Al-Sultan Abdullah first, Charles then greeted Raja Permaisuri Agong before formally welcoming the couple to the UK.

This afternoon’s engagement marked the first time King Charles had been pictured since the details of his coronation were announced yesterday.

Last night, Buckingham Palace announced that the coronation will take place on Saturday, May 6.

The Palace confirmed that the Queen Consort will be crowned alongside him by the Archbishop of Canterbury at Westminster Abbey.

King Charles is said to want a more modest affair than is tradition with the event being cut down to less than an hour, the guest list slashed by a three quarters and a less formal dress code. 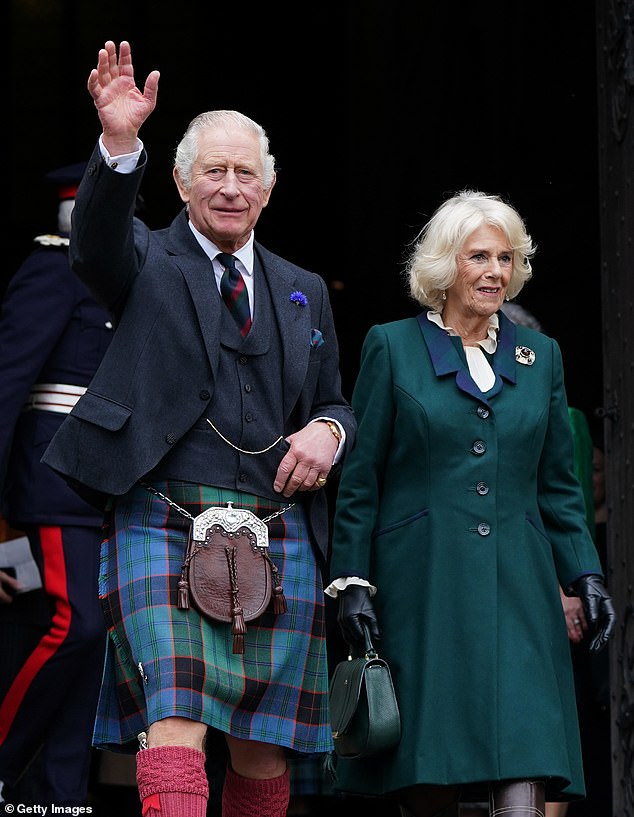 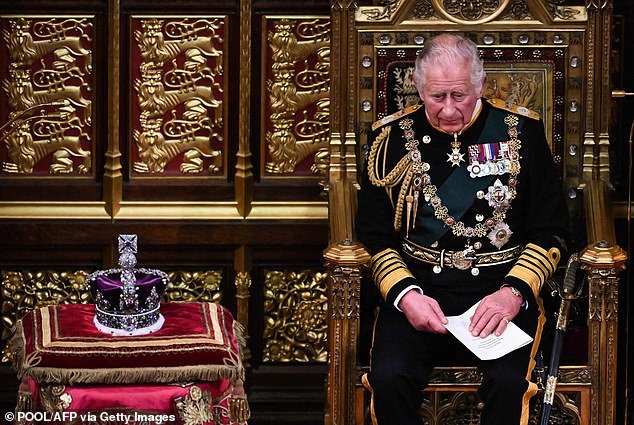 King Charles completed his first royal engagement since details of his coronation were announced this afternoon. Pictured during the State Opening of Parliament on May 10, 2022

‘The Coronation will reflect the monarch’s role today and look towards the future, while being rooted in longstanding traditions and pageantry,’ the Palace confirmed as it revealed the date.

Palace insiders said that while the Coronation will include the same core elements of the traditional ceremony which has retained a similar structure for more than 1,000 years, it would recognise the ‘spirit of our times’.

It is expected to be much ‘smaller and simpler’ than the three-hour spectacle of the late Queen’s momentous Coronation in 1953.

Plans for the major event are known by the codename Operation Golden Orb, which sets out the blueprint for the service and the pageantry surrounding it. 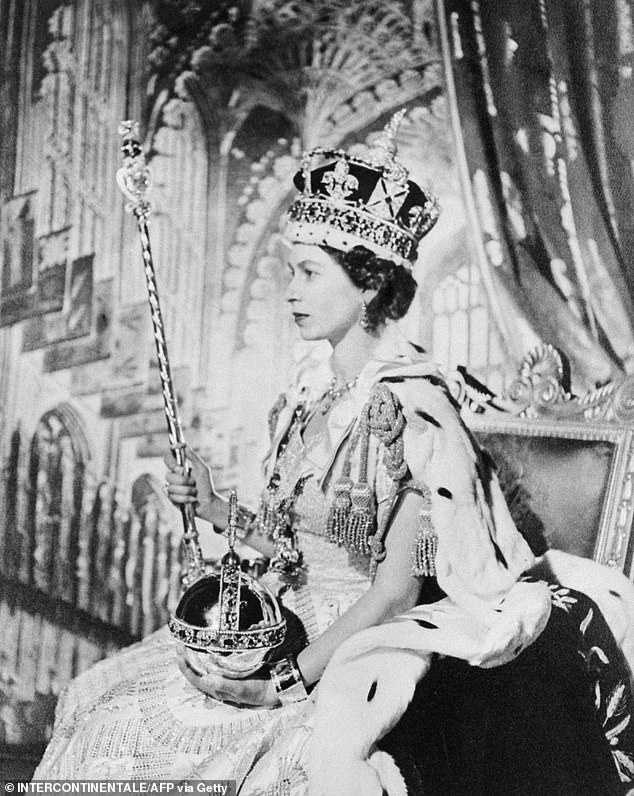 The coronation of King Charles III will take place on May 6, 2023, Buckingham Palace announced on October 11, 2022. The late Queen Elizabeth pictured on her Coronation day on June 2, 1953 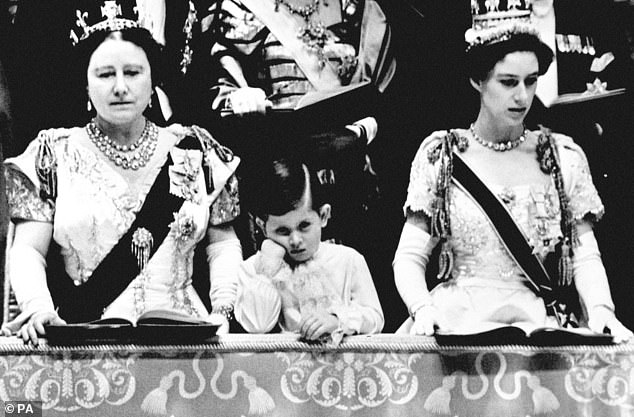 Prince Charles looks solemn as he stands chin on hand between the Queen Mother and Princess Margaret in the Royal Box at Westminster Abbey, from where he saw Queen Elizabeth II crowned on June 2, 1953

They are expected to see the guestlist slashed from 8,000 to just 2,000 with a more relaxed dress code with peers possibly allowed to wear lounge suits rather than ceremonial robes.

Ancient and time-consuming rituals – including presenting the monarch with gold ingots – are also set to be axed to save time.

However, the Prince of Wales is expected to play a prominent role in the occasion – the first time an heir will participate in the proceedings in three generations.

Charles was just four when his mother was crowned and the late Queen was 11 at the time of her father’s coronation – as children neither played a formal role.

In contrast Prince William – aged 40 and a full-fledged working royal – is expected to be an eminent figure at the event.

Betting firms could be banned from sponsoring football shirts