A knife attacker has stabbed two people in Manchester city centre as nearby offices are placed on lockdown.

It is understood the incident happened in Piccadilly Gardens near a Morrisons supermarket.

Staff at one nearby company issued a warning to workers to remain within their building.

The warning says ‘an individual has been the victim of stabbing. Please stay within the building until this incident is under control’ 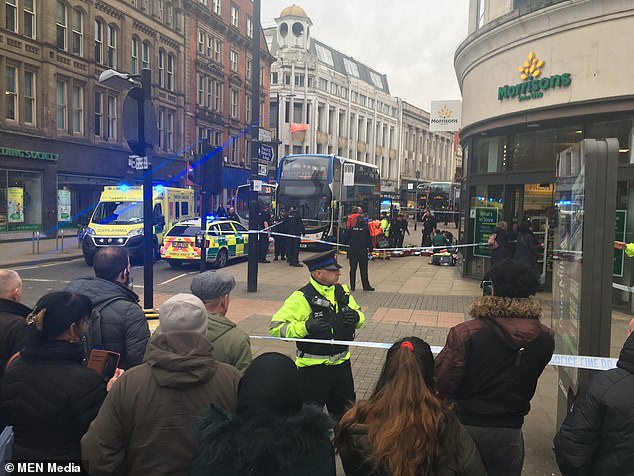 Witnesses say there has been a large police response and two people appear to being treated by paramedics.

A police spokesman said: ‘Police are currently responding to an incident near Piccadilly.

‘At around 12.10pm today (Monday 10 February 2020), police were called to reports of an assault on Piccadilly, Manchester City Centre.

‘Emergency services are currently in attendance.

‘One man has been taken to hospital with injuries which aren’t believed to be life threatening. Another man is receiving treatment at the scene for minor injuries.

‘An investigation is underway although officers are currently treating this as a targeted attack. There is no threat to the wider community.

‘No arrests have been made.

‘There are a number of road closures place and members of the public are being asked to avoid the area.’

Oldham Street is cordoned off at the corner of Piccadilly Gardens next to Morrisons.

One person wrote on Twitter: ‘Massive police and ambulance response in Piccadilly Gardens.’

Another added: ‘Huge police presence outside Morrisons on Piccadilly gardens, a couple of stretchers have been brought out of an ambulance.. hope everyone is okay down there.’

End of the Wild: Museum’s long-running taxidermy exhibition to close