The inseparable pair, known to fans by the portmanteau Kravis, tied the knot in Las Vegas early Monday after attending the Grammy Awards, according to multiple news outlets, including People and TMZ.

The lovebirds — whose romance will play big into the new Hulu show The Kardashians, which premieres April 14 — were married in the middle of the night at the One Love Wedding Chapel. They walked in at 1:45 a.m. on Monday morning, just hours after Barker's performance at the Grammys, with their security detail.

They had a marriage license, which they presented to the chapel's owner, who apparently served as a witness. They also requested that an Elvis impersonator officiate the wedding. They did not allow the venue to take photos of them, according to TMZ, bringing along their personal photographer instead. The ceremony lasted 30 minutes.

"I didn't know who it was until they pulled up," chapel owner Marty Frierson told People. "I advertise as 24-hours but they wanted to make sure I was still there. They paid and they requested Elvis Presley, that was mandatory. I called back 5 minutes later and was like, I got an Elvis, and there they were."

He added, "They came, got married, tossed the bouquet in the driveway, and danced to Elvis. They showed a lot love and had a lot of fun." 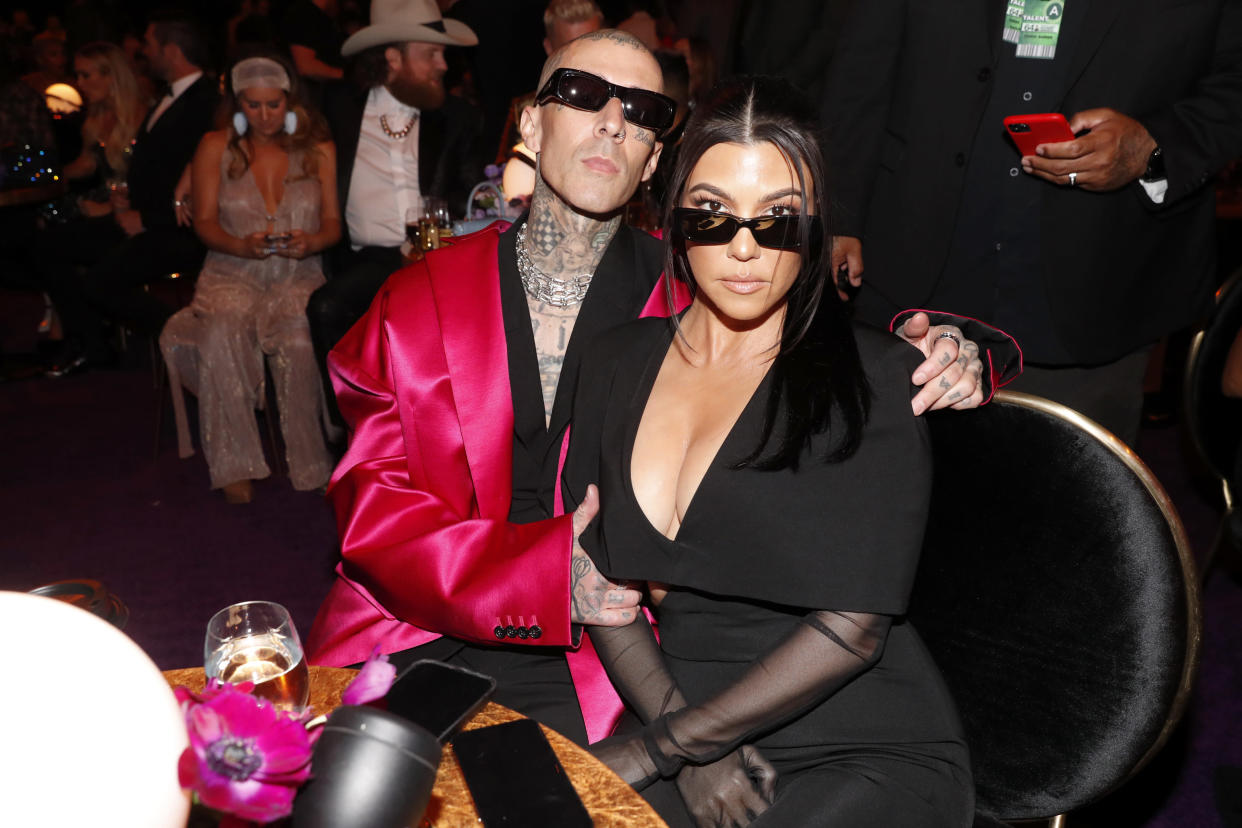 TMZ reports this will be the first of several weddings for the pair. Expect them all to air on Hulu.

Yahoo Entertainment has reached out to Kourtney's momager Kris Jenner to confirm and we will update this story when we hear back.

On Sunday night, the pair attended the Grammys together in Vegas, touching tongues on the red carpet — and making out during the show.

The PDA-loving pair were friends for years before they started dating in December 2020. (Barker actually had a long-ago fling with Kim Kardashian, if the gossip is true.) Kravis made their relationship Instagram official in February 2021.

Kourtney, 42, and Barker, 46, became engaged in October at the Rosewood Miramar hotel in Montecito, Calif., celebrating with family — including momager Kris and her famous sisters — after.

Kourtney, who helped Barker overcome his fear of flying, has shared that they've been undergoing IVF to try to get pregnant.

This is Kourtney's first marriage, though she shares three children — Mason, 12, Penelope, 9 and Reign, 7 — with ex Scott Disick (who isn't a huge fan of the coupling).

The drummer was previously married twice and has two children — Alabama, 16, and Landon, 18, — from his second marriage to Shanna Moakler (who's also not a superfan of the coupling). He is also stepdad to Moakler's daughter Atiana De La Hoya.

On Tuesday's Ellen DeGeneres Show, Kris was a guest and talks about Kravis's non-stop PDA.

Youngest of 10 Buffalo shooting victims is laid to rest