KYLE Rittenhouse was pictured grinning as he left court on Friday after he was found not guilty of killing two.

Rittenhouse was acquitted of all charges after pleading self-defense in the deadly Kenosha shootings that became a flashpoint in the debate over guns, vigilantism and racial injustice in the US. 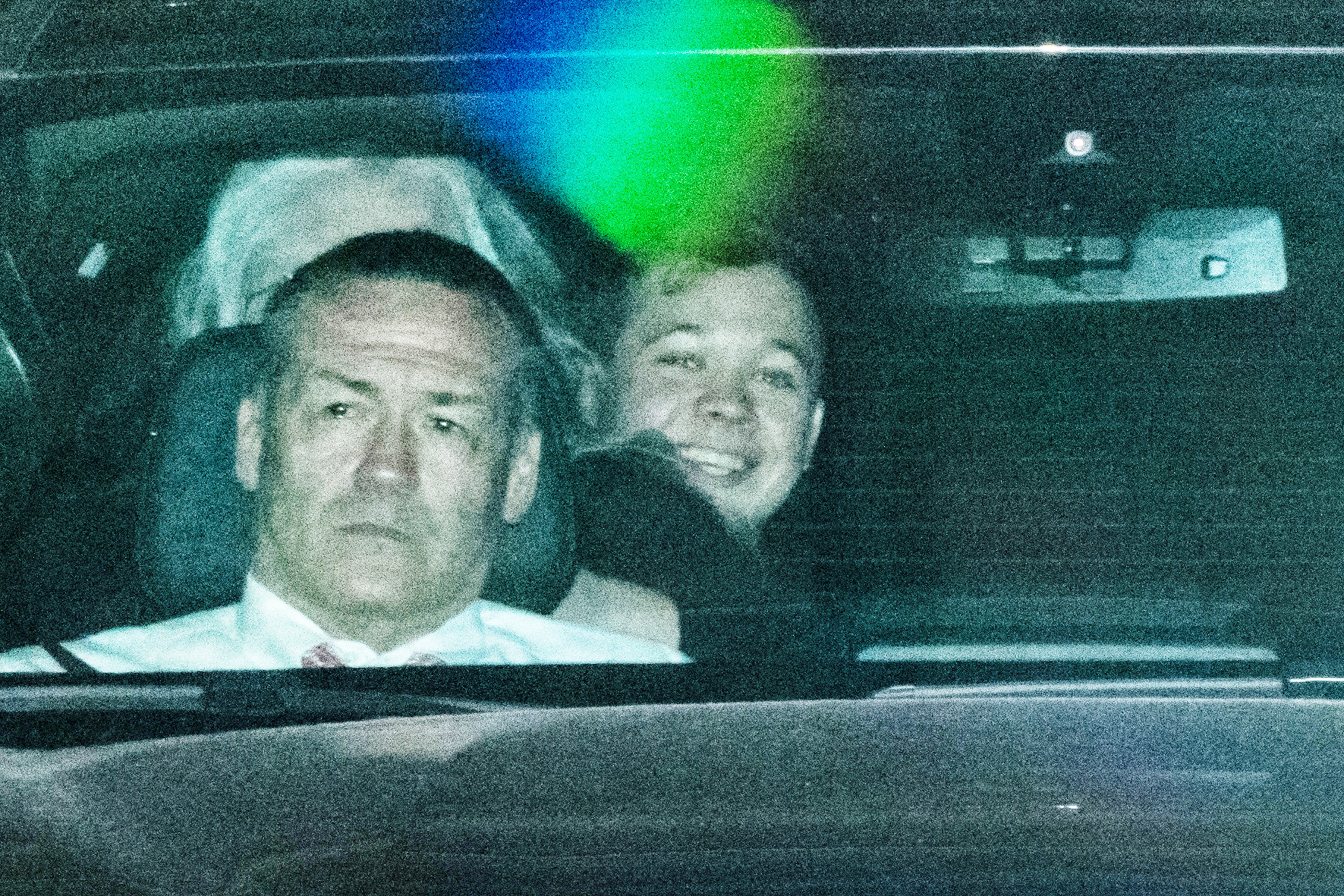 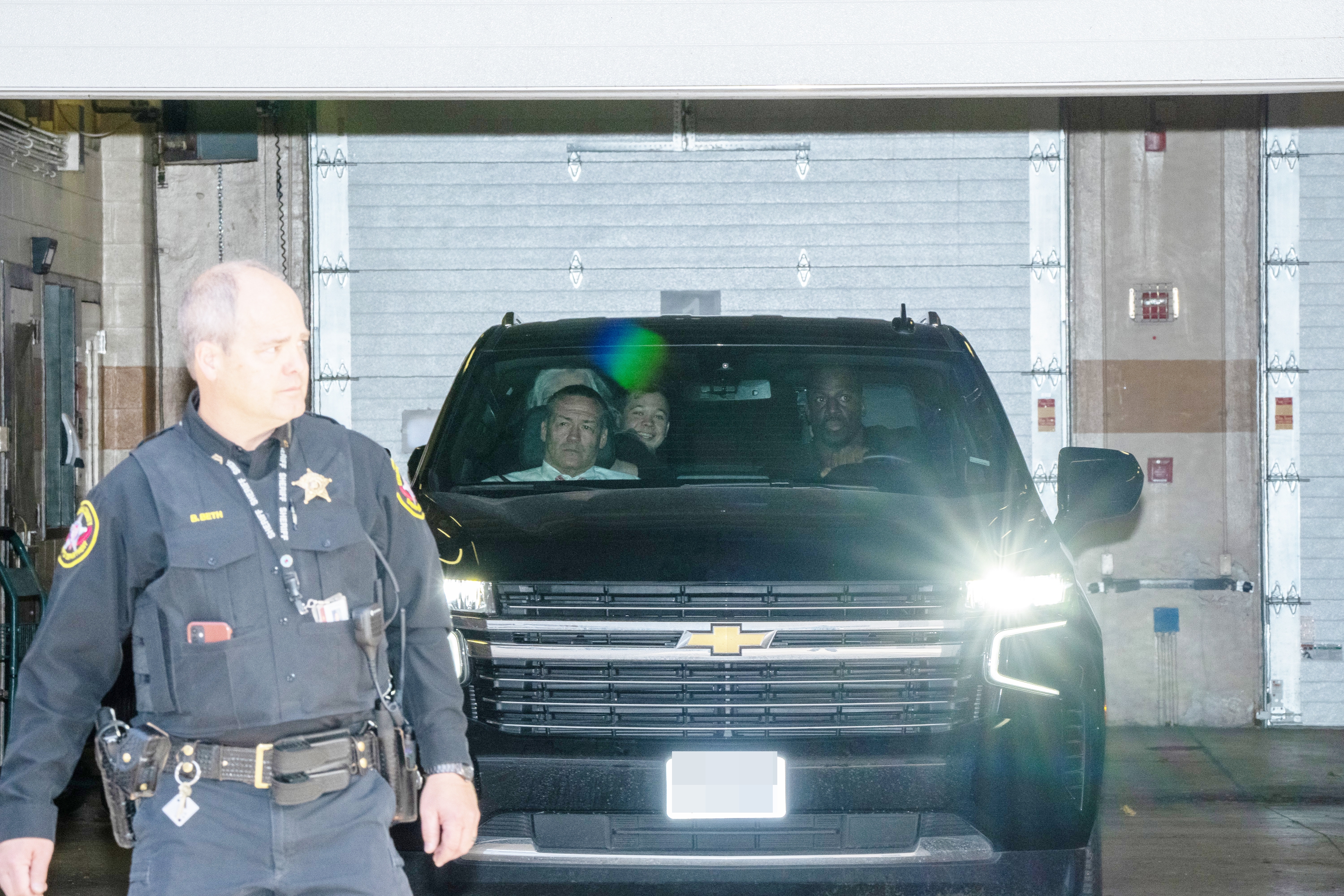 Rittenhouse, 18, began to choke up, fell to the floor and then hugged one of his attorneys upon hearing the verdict.

Rittenhouse quickly rushed out of the courthouse and was whisked away in a black Chevrolet Equinox.

The Sun snapped Rittenhouse's face beaming as he sat in the back seat of the vehicle as he left court a free man.

He had been charged with homicide, attempted homicide and reckless endangering after killing two men and wounding a third with an AR-style semi-automatic rifle during a tumultuous night of protests over police violence against black people in the summer of 2020.

The former police youth cadet is white, as were those he shot.

The jury, which appeared to be overwhelmingly white, deliberated for close to 3 1/2 days.

Rittenhouse could have gotten life in prison if found guilty on the most serious charge, first-degree intentional homicide, or what some other states call first-degree murder.

As he dismissed the jurors, Circuit Judger Bruce Schroeder assured them the court would take “every measure” to ensure they are safe.

A sheriff’s deputy immediately whisked Rittenhouse out a back door through the judge’s chambers.

In reaction to the verdict, prosecutor Thomas Binger said the jury had spoken.

Wisconsin Lt. Gov. Mandela Barnes, who is Black and a Democratic candidate for U.S. Senate, reacted bitterly to the outcome.

“Over the last few weeks, many dreaded the outcome we just witnessed,” Barnes said. “The presumption of innocence until proven guilty is what we should expect from our judicial system, but that standard is not always applied equally. We have seen so many black and brown youth killed, only to be put on trial posthumously, while the innocence of Kyle Rittenhouse was virtually demanded by the judge.”

As the verdict drew near, Gov. Tony Evers pleaded for calm and said 500 National Guard members would be ready for duty in Kenosha if needed.

Rittenhouse was 17 when he went from his home in Antioch, Illinois, to Kenosha after businesses in the city were ransacked and burned over the shooting of a Black man, Jacob Blake, by a white police officer.

Carrying a weapon that authorities said was illegally purchased for the underage Rittenhouse, he joined other armed citizens in what he said was an effort to protect property and provide medical aid.

Prosecutors portrayed Rittenhouse as a “wannabe soldier” who had gone looking for trouble that night and was responsible for creating a dangerous situation in the first place by pointing his rifle at demonstrators.

But Rittenhouse testified: “I didn’t do anything wrong. I defended myself.”

Breaking into sobs at one point, he told the jury he opened fire after Rosenbaum chased him and made a grab for his gun. He said he was afraid his rifle was going to be wrested away and used to kill him.

Huber was then killed after hitting Rittenhouse in the head or neck with a skateboard, and Grosskreutz was shot after pointing a gun of his own at Rittenhouse.

The case was part of an extraordinary confluence of trials that reflected the deep divide over race in the United States: In Georgia, three white men are on trial in the killing of Ahmaud Arbery, while in Virginia, a trial is underway in a lawsuit over the deadly white-supremacist rally held in Charlottesville in 2017.

The exact racial makeup of the Rittenhouse jury wasn’t clear because jurors were not asked about their race in court.

The bloodshed in Kenosha took place during a summer of sometimes-violent protests set off across the U.S. by the killing of George Floyd in Minneapolis and other cases involving the police use of force against Black people.

While some Americans condemned Rittenhouse as a vigilante, some on the right hailed him as a hero who exercised his Second Amendment gun rights and tried to put a stop to lawlessness.

Rittenhouse had also been charged with possession of a dangerous weapon by a person under 18, a misdemeanor that had appeared likely to lead to a conviction. But the judge threw out that charge before jury deliberations after the defense argued that the Wisconsin law did not apply to the long-barreled rifle used by Rittenhouse.

Schroeder’s handling of the trial drew attention at several points, including when he led applause for military veterans on Veterans Day just before a defense witness who had been in the Army was about to take the stand. The judge also let Rittenhouse himself draw juror numbers from a raffle drum to set the final 12 who deliberated.

Video and testimony from some of the prosecution’s own witnesses seemed to buttress Rittenhouse’s claim of self-defense.

Witnesses described Rosenbaum as “hyperaggressive” and said that he dared others to shoot him and threatened to kill Rittenhouse earlier that night. A videographer testified Rosenbaum lunged for the rifle just before he was shot, and a pathologist said his injuries appeared to indicate his hand was over the barrel.

Also, Rosenbaum’s fiancee disclosed that he was on medication for bipolar disorder and depression. Rittenhouse’s lawyers branded Rosenbaum a “crazy person.”

Some civil rights activists saw a racial double standard in the way the white gunman was treated.

On the night of the shootings, law enforcement officers saw Rittenhouse and other armed people on the streets despite a curfew and gave them bottles of water, with one officer heard saying over a loudspeaker, “We appreciate you guys.”

Later, amid the tumult, Rittenhouse managed to get past a police line with his weapon slung over his shoulder and was not arrested that night.

Amanda Knox tells Dr. Phil why she is helping the wrongfully convicted