A yellow rose was placed on the upper house seat of late Labor MP Jane Garrett on Wednesday as the Victorian parliament paid tribute to the former minister who died of breast cancer last month.

Premier Daniel Andrews addressed the lower house to begin the condolence motion, which was watched by Garrett’s family members. 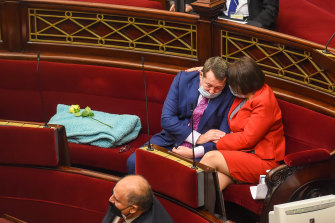 Labor MP Mark Gepp is comforted during an emotional tribute to Jane Garrett in the upper house.Credit:Justin McManus

“The contribution that your mum made to this state was big and important,” Andrews said. “There are workers who will come home safely, and there are families whose lives will be so much richer and so much fairer, so much more prosperous. People who will have dignity and respect and opportunity and a better future because of the work your mum did.

Upper house Labor MP Mark Gepp made a tearful tribute to his “bestie”, placing a yellow rose on Garrett’s seat. He offered his support to Garrett’s children, describing them as her greatest legacy. 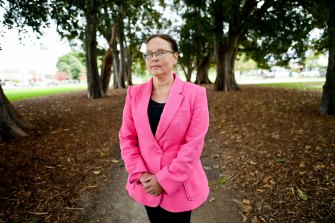 “We may not be related to you in the traditional family sense, but you cannot get rid of us now. We will always be there for you and your dad. We want to thank you, all of us, for sharing your mother with us,” Gepp said.

Garrett entered parliament in 2010 as the member for Brunswick and was promoted to cabinet in 2014. She was a rising star in the Labor Party but was sidelined in 2016 during a bitter pay dispute with the firefighters union that pitted her against Andrews and union leader Peter Marshall.

She resigned as emergency services minister and later moved to the upper house.

Gepp said Garrett was “Labor to her bootstraps” and never compromised her values. 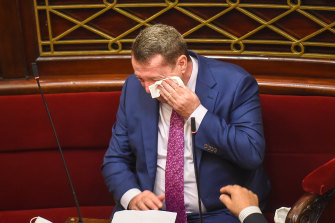 “Jane’s ministerial career, of course, did not end in the way that she wanted it to, and that is a shame because she was a bloody good minister. Jane knew during those times that sticking to the values that I spoke of earlier would come at a personal cost, but she did not deviate from doing what she thought was the right thing to do.

“To see Jane was in full flight in this place … you just had to stop and watch. It was compelling viewing.”

The government confirmed her state memorial would be held at the Brunswick Town Hall on September 2.

Doors will open at 10am for the service, which will also be live-streamed, with Garrett’s family asking for donations to the Smith Family in lieu of flowers.

Garrett, 49, took leave in 2016 when she was diagnosed with breast cancer. She was due to leave parliament at the November state election.

She had also worked as a senior adviser to former premier Steve Bracks, as an industrial relations and discrimination lawyer, and as mayor of the City of Yarra.