Businesses are increasingly struggling to find and retain workers who can afford to live within an acceptable commuting range, with a major new study warning a chronic lack of affordable housing is set to cost taxpayers $25 billion a year if nothing is done.

Some businesses have even taken matters into their own hands, offering the option of low-cost accommodation to lure workers unwilling to brave the long daily commute. 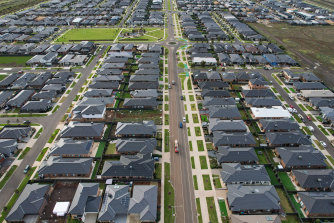 Housing affordability is a major challenge for buyers and renters.Credit:Jason South

The study, by public policy consultants SGS Economics and Planning, found decades of under-investment had triggered a collapse in the proportion of the housing stock regarded as affordable.

Social housing – a catch-all phase covering public housing and other forms of subsidised or lower-cost housing – now makes up just 4 per cent of national housing stock, a record low, and down from 6 per cent in 1996.

It warned if the current trend continues, more than 2 million households that are privately renting will hit the internationally recognised benchmark for housing stress by 2051, under which housing costs soak up at least 30 per cent of a household’s income.

That would represent as much as 14 per cent of the total population (assuming an expected population of 37.4 million people in 2051 and an average household size of 2.6 people).

That would leave taxpayers facing an annual bill of $25 billion by 2051, chalked up through higher spending on health and mental health services, domestic violence services, lost educational opportunities and increased anti-social behaviour, as well as significant productivity losses for businesses and workers.

“This churn is costly both for the employer and employee, and labour market productivity suffers,” the report said.

“Education outcomes for children in lower-income households forced to regularly move due to housing costs can be compromised. Lack of secure housing and a stable home environment can foster anti-social behaviour and criminal activity, triggering expensive government interventions in the policing and justice system.”

The report was commissioned by Housing All Australians (HAA), a group of business figures and academics claiming housing affordability should not only be regarded as a major social problem but also an economic one.

HAA founder and director Rob Pradolin, a former property developer, said the lack of affordable housing wasn’t just a serious issue for low-income households. He said it had become a major economic issue for businesses struggling to attract workers within commuting range.

“We are already hearing of businesses struggling to keep their doors open because the rising rental prices for housing are pushing their staff further out until they are beyond a reasonable commuting range.”

He said businesses were already having to invest in affordable housing to provide cheap accommodation to attract staff, particularly in regional and coastal areas that have experienced
significant population shifts. 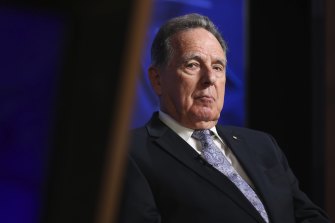 Former ACCC chairman Graeme Samuel said the lack of affordable housing is an issue of great significance to the business sector.Credit:Alex Ellinghausen

“The business sector has a long history of engaging with governments to address policy sticking points, most recently during the pandemic,” he said.

“The lack of affordable housing is an issue of equal if not greater significance to the business sector given this is a problem that is only going to get worse without a nationally co-ordinated response at the highest levels of government and industry.”

The consortium behind the $120 million Hotel Continental redevelopment on the Mornington Peninsula in Sorrento, made up of the Trenerry Property Group, Victor Smorgon Group and the Kanat Group, has spent about $10 million converting a nearby vacant aged care facility into low-cost accommodation for hotel workers.

Robert Dicintio, director at Trenerry Property Group, told The Age and the Herald that about half of the rooms at the 77-bed facility would be used to accommodate the hotel staff to a three-star standard, costing them about $40 a night. The other half of the building will be used to provide low-cost accommodation for the local area. 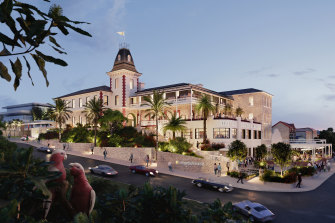 An artist’s impression of the InterContinental Sorrento, which will include affordable accommodation for hotel workers.Credit:

Dicintio said a three-hour daily commute from Melbourne was “just not viable”, creating the risk of staffing shortages, particularly during peak periods of the year.

“The problem is grave,” Dicintio said. “Because the value of the real estate on the peninsula has grown so significantly and that combined with the increase in rental costs in the area … we basically started looking into the opportunities to develop affordable accommodation for ourselves.”

The report estimated it would cost about $55 billion to bridge the gap between “affordable rent” (below 30 per cent of housing income) and market rents. But it said the benefits would be worth about $110 billion, accrued through health cost savings, reduced domestic violence, reduced crime, better education outcomes and higher productivity.

That means tackling the lack of affordable rental accommodation would produce $2 of benefits for every $1 spent – a much higher rate of return than many infrastructure projects. The budget savings would be $7.8 billion over 30 years in Victoria, compared to $2.2 billion and $5.4 billion in Queensland.

Economist Brian Haratsis said the shortage of affordable housing would only get worse as Australia opens up to international workers to fill current job vacancies.

“Yes, we need more overseas labour, but where will these workers live? Businesses will find it
difficult to attract staff if they can’t find a place to live and if they can’t afford the rent where there
is available stock,” Haratsis said.