Simone Biles broke down in tears Wednesday as she recounted the abuse she suffered at the hands of USA Gymnastics doctor Larry Nassar during the Senate hearing into FBI’s botched probe into the sexual abuse case and blasted the agency for turning a ‘blind eye’ to the attacks.

Biles, 24, testified before the Senate Judiciary Committee that she was failed by the FBI, USA Gymnastics (USAG) and the US Olympic and Paralympic Committee (USOPC) in their handling of Nassar’s abuse and demanded ‘consequences’ for those who ‘allowed the predator to harm children’.

‘To be clear I blame Larry Nassar and I also blame an entire system that enabled and perpetrated that abuse,’ she said.

Biles demanded ‘answers’ and called for the people who let Nassar get away with the abuse for decades to be held ‘accountable’, saying she fears that the same thing could happen in the future.

‘I sit before you today to raise my voice so that no little girl must endure what I, the athletes at this table and the countless others needlessly suffered under Nassar’s guise of medical treatment – which we continue to endure to today,’ she said.

‘We have been failed and we deserve answers. Nassar is where he belongs but those who enabled him deserve to be held accountable.

‘If they are not, I am convinced that this will continue to happen to others across Olympic sports.’

Biles was joined by her fellow athletes McKayla Maroney, Maggie Nichols and Aly Raisman on Capitol Hill to testify about the FBI’s botched handling of its sex abuse investigation of Nassar.

The hearing examines why the FBI failed to investigate Nassar, 58, for his crimes sooner, leaving the predator free to carry on his reign of abuse for more than a year after allegations were first reported.

The FBI’s handling of the case came under close scrutiny in a damning report by the Justice Department watchdog released in July.

The report from Justice Department Inspector General Michael Horowitz found the bureau made a series of failures in its handling of allegations against him when they were first alerted to the abuse in 2015.

It emerged Tuesday that the FBI has now fired an agent accused in the report of failing to launch a proper investigation into the allegations.

Michael Langeman, who worked as a supervisory special agent (SSA) in the FBI’s Indianapolis office and interviewed Maroney when she came forward with allegations in 2015, was ousted from his role last week, sources told The Washington Post.

Langeman had been removed from his duties as an agent following the release of the report, which found he failed to properly document the interview for 17 months.

John Manly, an attorney for many of Nassar’s alleged victims, said Langeman’s firing is ‘long overdue’ but said the timing – just days before the Senate hearing – ‘seems cynical’. 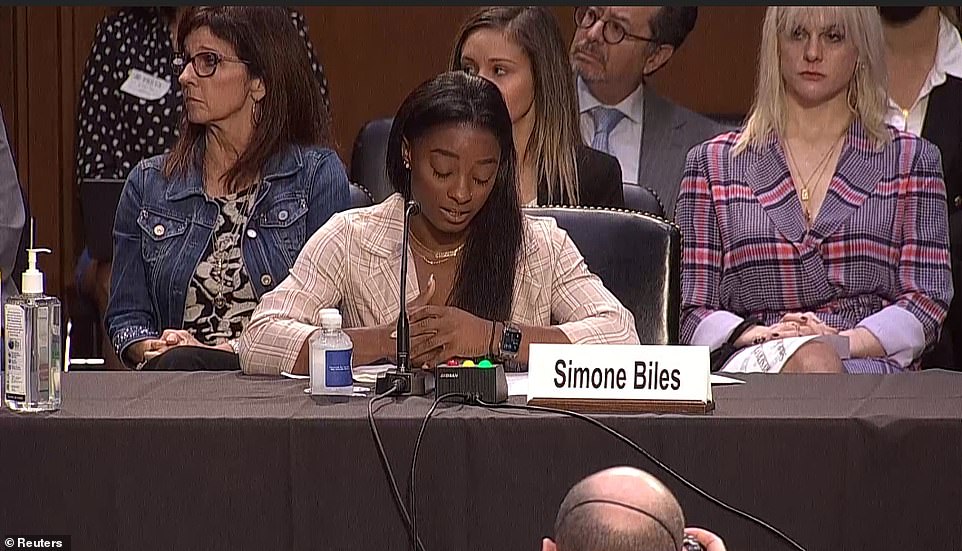 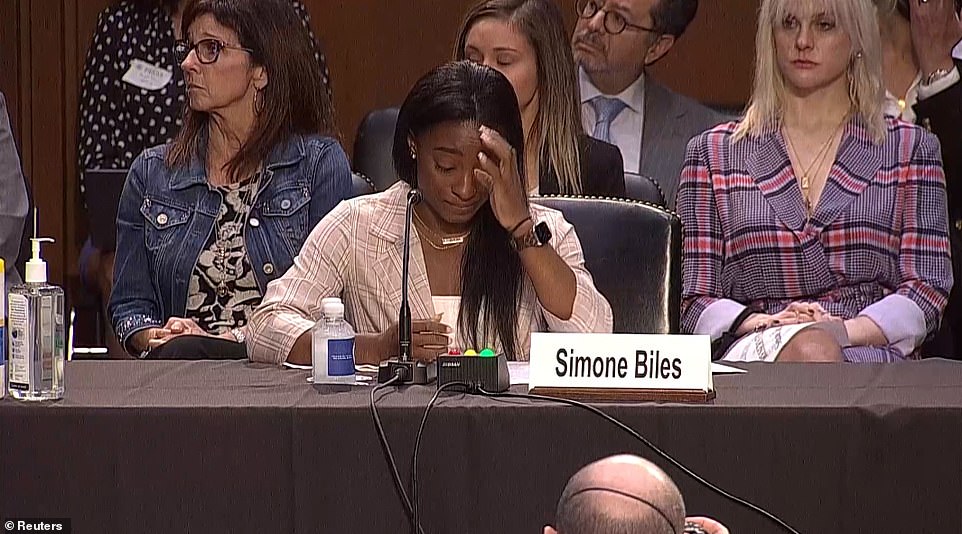 Biles, 24, testified that she was failed by the FBI, USA Gymnastics and the Olympic and Paralympic Committee in their handling of Nassar’s abuse and demanded ‘consequences’ for those who ‘allowed the predator to harm children 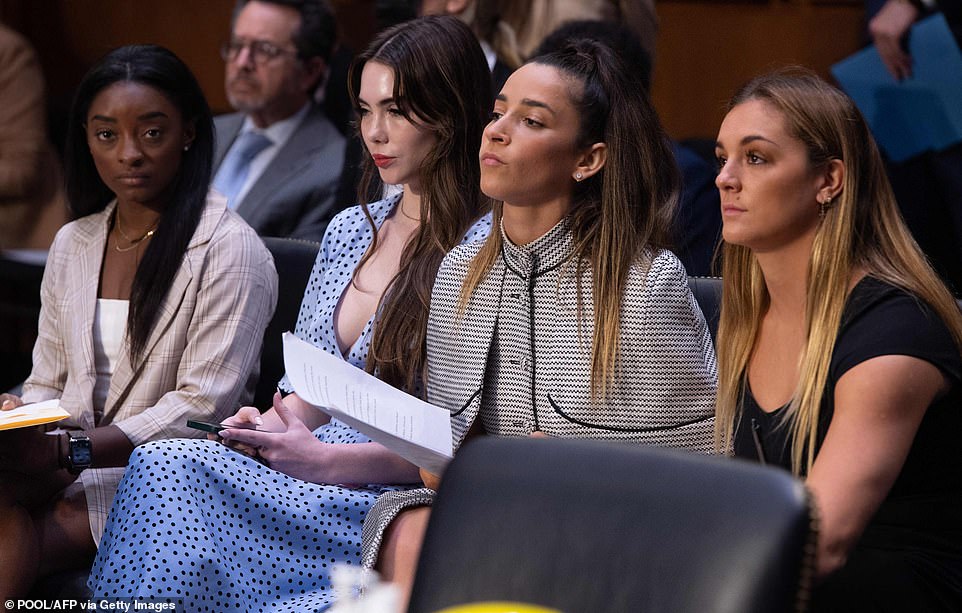 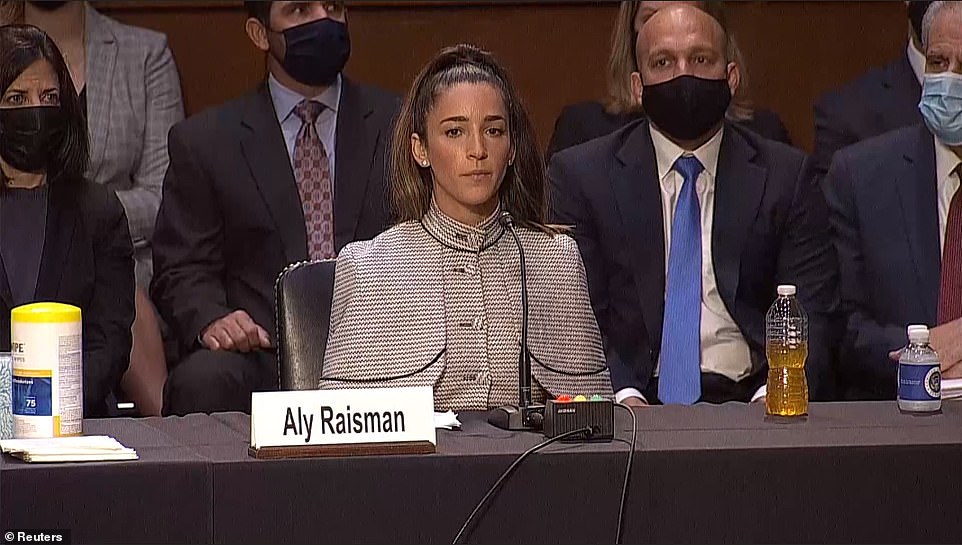 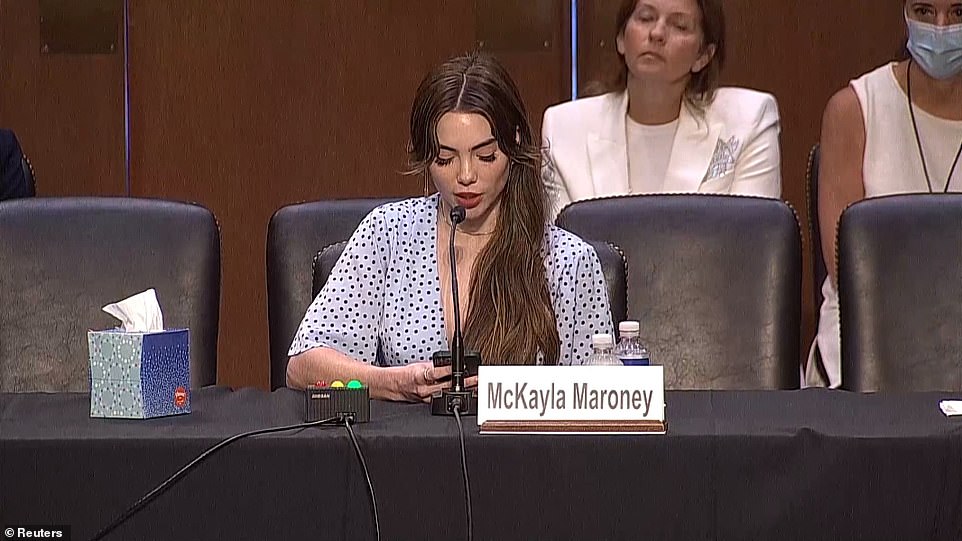 Biles testified that, after reading the watchdog report, ‘it truly feels like the FBI turned a blind eye to us and went out of its way to protect USAG and USOPC.’

‘A Message needs to be sent. if u allow a predator to harm children, the consequences will be swift and severe,’ she said.

Biles also testified about the toll the abuse had taken on her including most recently in the Tokyo Olympic Games this summer, where she pulled out of five final events for mental health reasons.

She told the committee how the delay to the Games due to COVID-19 meant she had ‘another 365 days’ of training in the gym and being reminded of the abuse.

‘As the lone competitor in the recent Tokyo games who was a survivor of this horror, I can assure you that the impacts of this man’s abuse are not ever over or forgotten,’ she said.

‘This meant I would be going to the gym, to training, to therapy, living daily among the reminders of this story for another 365 days.’

The athlete said she felt the ‘burden’ most when she traveled to Tokyo without the support of her family amid COVID-19 restrictions. 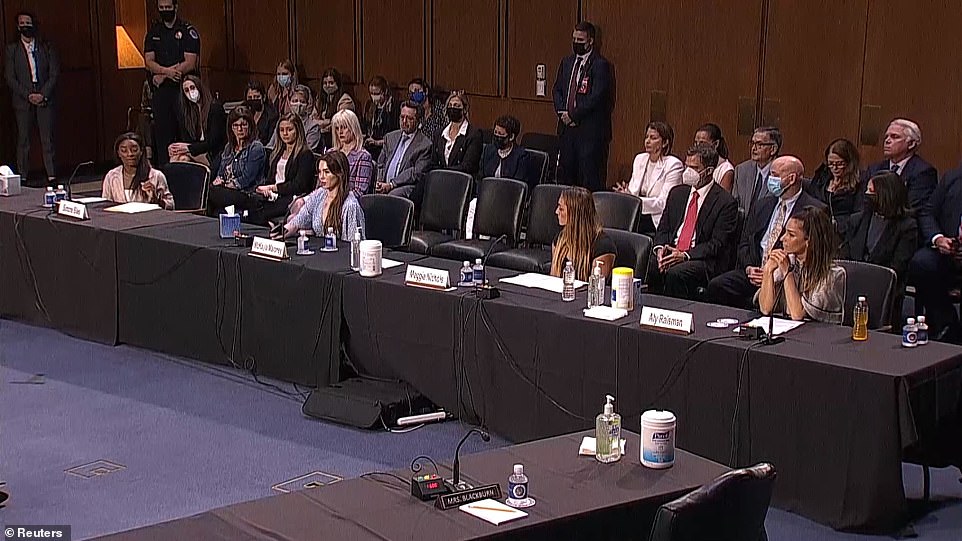 The four victims testified before the Senate Judiciary Committee that they were failed by the FBI, USA Gymnastics (USAG) and the US Olympic and Paralympic Committee 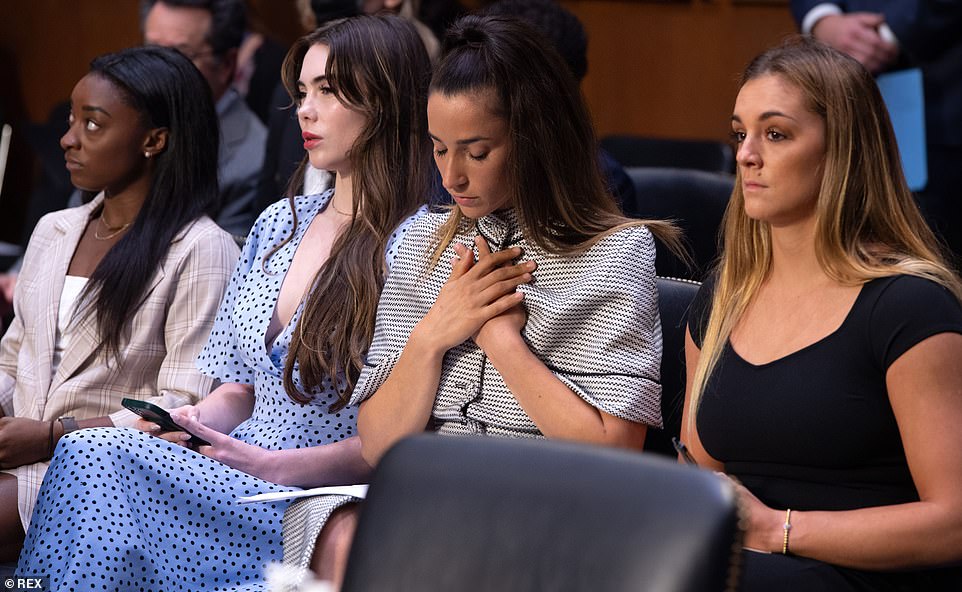 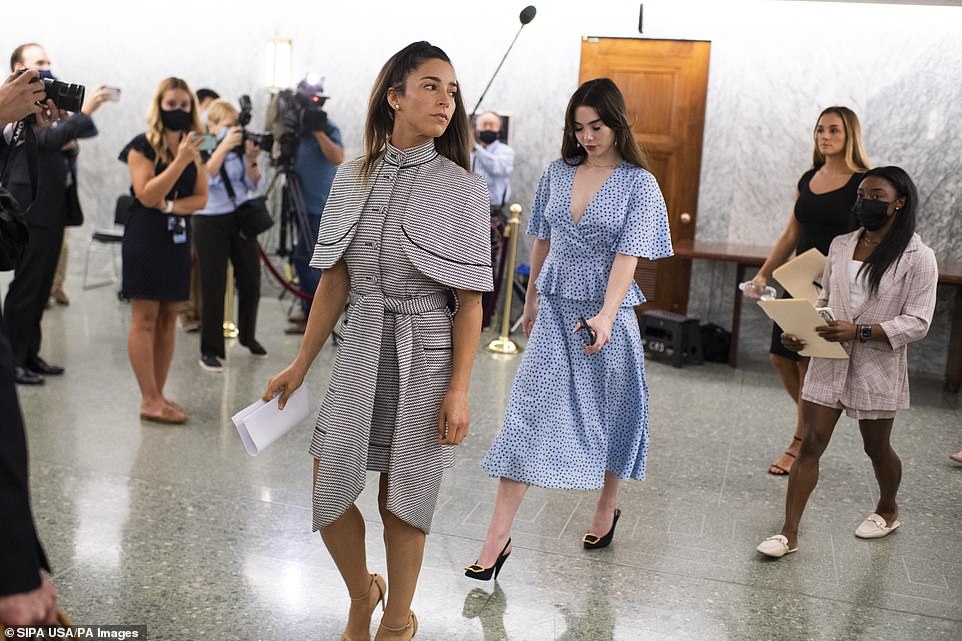 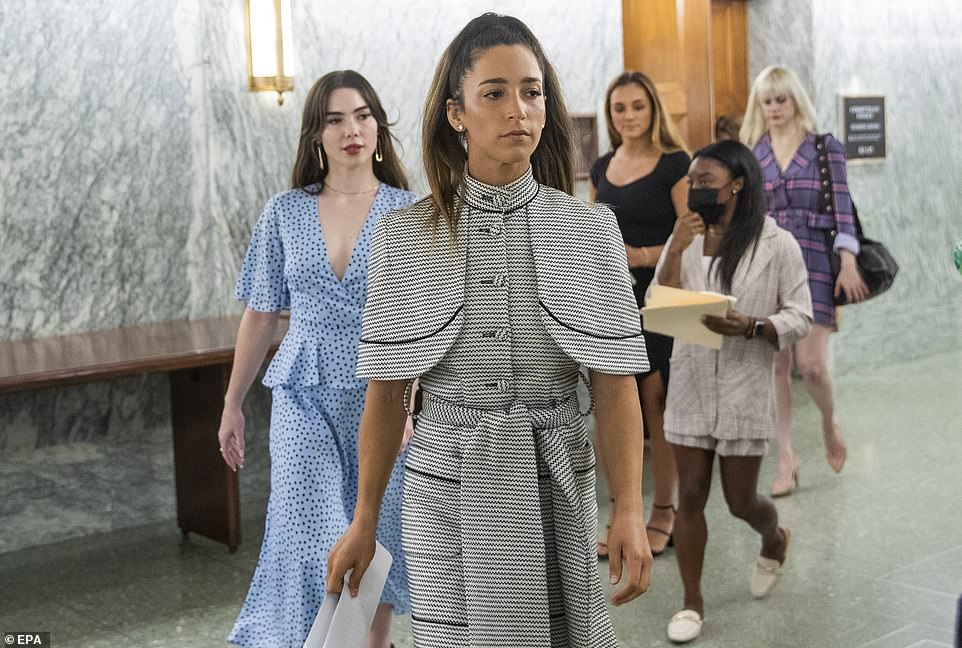 Maroney testified how she spoke to FBI agents for three hours in the summer of 2015 telling them her ‘entire story of abuse’ but they failed to take action – not reporting it for more than a year and, when they did, they made ‘entirely false claims about what I said.’

Maroney, who took home gold and silver medals at the 2012 Olympics, said the FBI ‘chose to fabricate’ the narrative to ‘protect a serial child molesterer and not protect me.’

‘After telling my entire story of abuse to the FBI in the summer of 2015, not only did the FBI not report my abuse, but when they eventually documented my report, 17 months later, they made entirely false claims about what I said,’ she said.

‘I was shocked and deeply disappointed at this narrative they chose to fabricate. They chose to lie about what I said and protect a serial child molester rather than protect not only me but countless others.’

She recounted how she had not even confided in her mother at this point but told the agents in ‘extreme detail’ over the phone about multiple incidents of abuse.

She described breaking down in tears on the phone as she went into graphic detail about the abuse only for the agents to ‘minimize and disregard’ her experience and ask: ‘is that all?’

‘I began crying over the phone, and there was just silence. I was so shocked by the agents’ silence and disregard for my trauma and after a minute of silence he just said: is that all?’ she said.

‘Those words in itself was one of the worst moments of this entire process for me.

‘To have my abuse be minimized and disregarded by the people who were supposed to protect me, just to feel like my abuse was not enough… but the truth is my abuse was enough and they wanted to cover it up.’ 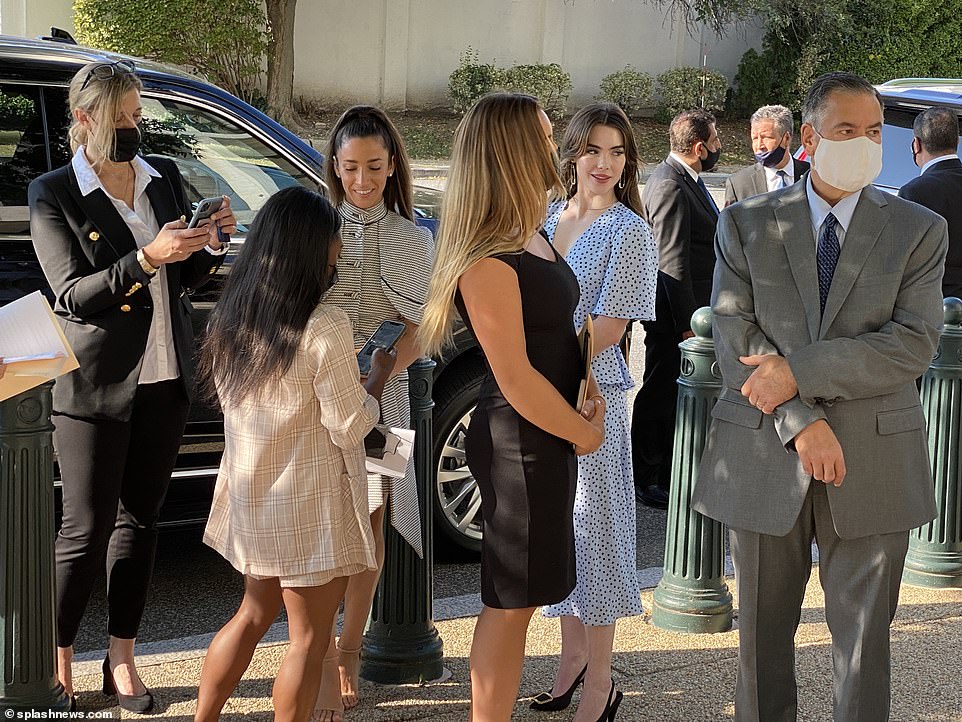 Simone Biles, McKayla Maroney, Maggie Nichols and Aly Raisman have arrived at the US Senate to testify about the FBI’s mishandling of its sex abuse investigation of USA Gymnastics doctor Larry Nassar 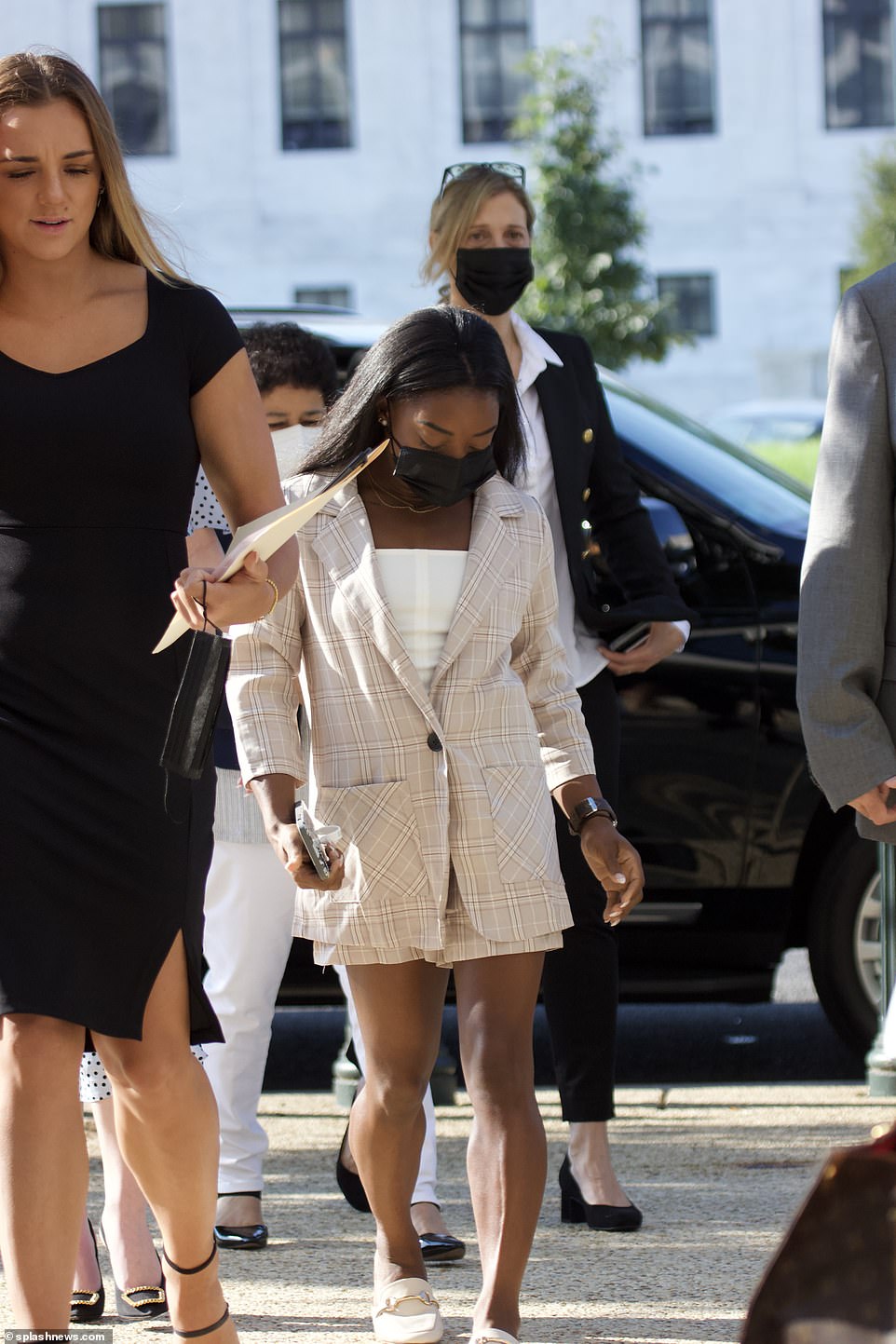 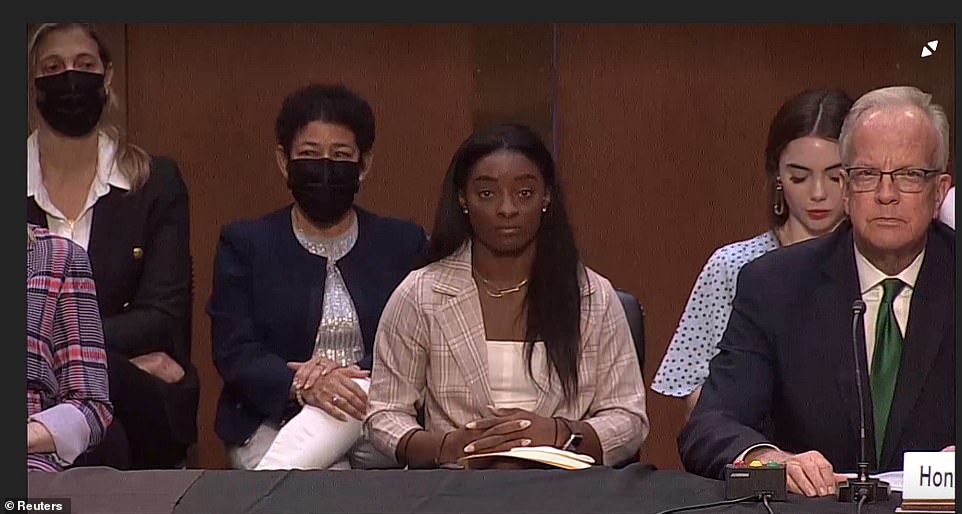 Biles, the 24-year-old Olympic medalist, listens during the opening comments Wednesday morning as the hearing began

Biles, Raisman, Nichols and Maroney sat side by side during the panel to give testimony about the abuse by the doctor.

Senate Judiciary Committee Chairman Dick Durbin introduced the four star athletes at the start of the hearing saying they are ‘star athletes… and they are also survivors.’

Durbin said at the start of the hearing that the FBI’s failures in protecting athletes ‘shock the conscience’, as he noted the inspector general’s findings ‘paint a shocking picture of FBI dereliction of duty and gross incompetence.’

‘It shocks the conscience when those failures come from law enforcement itself,’ Durbin said.

‘Our focus today is on the FBI, how did it fail, so badly, when it came to Nassar’s victims, and what are FBI leaders doing today to ensure this never happens again.’

US Senator Jerry Moran asked ‘why was there more than one’ victim of Nassar, ‘more than dozens’ – given that victims reported his crimes to authorities.

The FBI’s investigation into Nassar started in July 2015, after USA Gymnastics President and CEO Stephen Penny reported the allegations to the FBI’s Indianapolis field office and provided agents with the names of three victims willing to be interviewed.

That office, then led by Special Agent in Charge W. Jay Abbott, did not formally open an investigation. The FBI only interviewed one witness months later, in September 2015, and failed to formally document that interview in an official report known as a ‘302’ until February 2017 – well after the FBI had arrested Nassar on charges of possessing sexually explicit images of children in December 2016.

When the interview was finally documented in 2017 by an unnamed supervisory special agent, the report was filled with ‘materially false information and omitted material information,’ Horowitz’s report determined.

The office also failed to share the allegations with state or local law enforcement agencies.

‘Children suffered needlessly because multiple agents in multiple offices at the FBI neglected to share the Nassar allegations with their law enforcement counterparts at state and local agencies,’ ranking Republican Charles Grassley said in prepared remarks.

‘Disturbingly, the abuse occurred at the hands of someone who was entrusted with their medical treatment and well-being,’ he added. 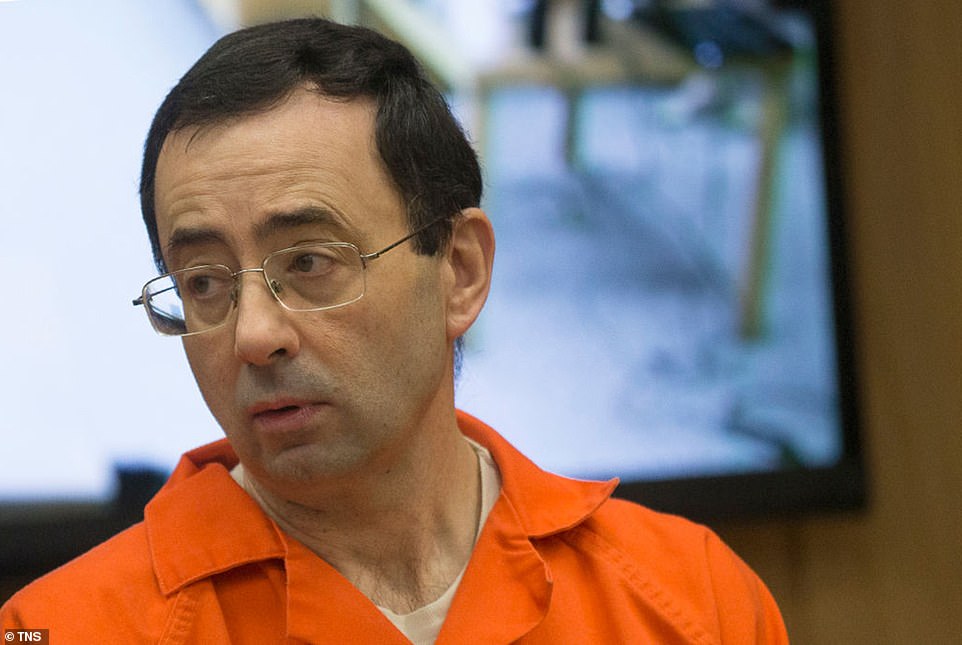 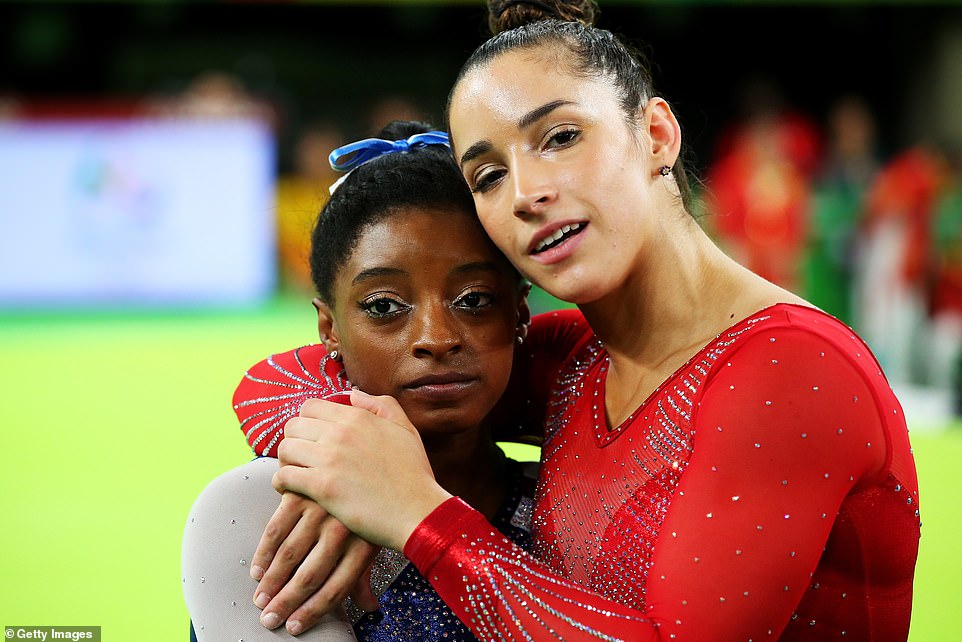 Horowitz also said that Abbott, who retired from the FBI in 2018, also violated the FBI’s conflict of interest policy by discussing a possible job with the U.S. Olympic Committee while he was involved with the Nassar investigation.

Neither Abbott nor the other unnamed supervisory special agent who botched the Nassar probe were prosecuted for their actions.

The FBI previously called Abbott’s behavior ‘appalling’ and said the supervisory special agent remains with the FBI but is no longer a supervisor and is ‘not working on any more FBI matters.’

An attorney for Abbott previously said in a statement he is thankful to prosecutors for bringing Nassar to justice.

Nassar, who had been the main doctor for Olympic gymnasts, was sentenced in federal court in 2017 to 60 years in prison on charges of possessing child sex abuse material.

The following year, he was also sentenced up to 175 years and up to 125 years, respectively, in two separate Michigan courts for molesting female gymnasts under his care. Prosecutors have estimated he sexually assaulted hundreds of women.