After numerous customer complaints about the bottom of pots and pans becoming damaged when used, the French brand has written to customers advising that their choice of cooking oil may be causing the problem.

Olive oil has a low smoke point, meaning that it can burn quicker and give food an acrid taste, compared to oils such as sunflower, avocado, canola, coconut, corn and sesame. 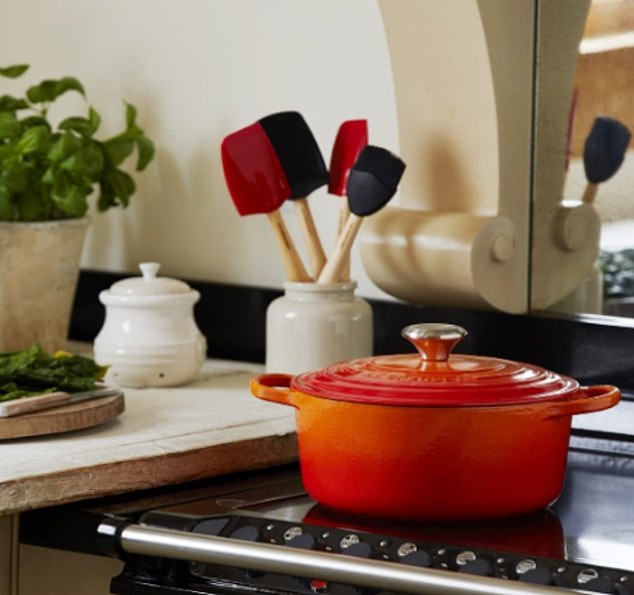 Le Creuset has warned customers against cooking with olive oil, as its low smoke point is damaging pans. File image 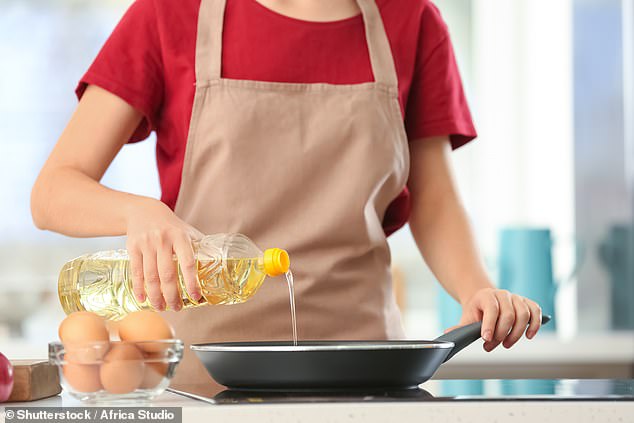 The French company warned that burnt oil an form a brownish film on the pan, creating a barrier between the food and the cookware. File image

After writing to the company, one Le Creuset customer was told: ‘We advise to avoid using olive oil and recommend oils with a higher burning point like rapeseed oil, coconut oil and sunflower oil.

‘Olive oil has a very low burning point, and this can form a brownish film on the pan (burnt oil), creating a barrier between the food and the pan.

‘We would advise that every now and then you rub cooking oil around the pan and leave it whilst it is not in use. This will help preserve the quality of it.’

Similar advise has also been issued by John Lewis, which warned that olive oil will ‘carbonise’ on ceramic pans and leave behind a residue.

And Smeg recommended customers not allow oil to ‘smoke or burn’, adding that food can be cooked and fried in its non-stick pans without oil.

‘You should never cook with olive oil. It should only ever be used in finishing a dish,’ he told The Sunday Telegraph.

‘If you cook with it, the smoking point is so low, it removes the Teflon from non-stick pans or burns traditional pans.’

‘Oftentimes, you’ll want that wok or skillet rippling hot. But when a flavourful raw oil or pool of butter starts sending up smoke, you’re headed into a danger zone.

‘Heated past its smoke point, that fat starts to break down, releasing free radicals and a substance called acrolein, the chemical that gives burnt foods their acrid flavour and aroma.’ 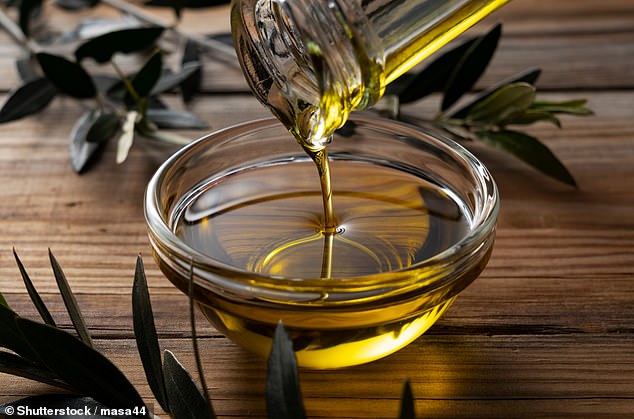 Oils with a low smoke point are recommended for dressings, drizzling over a finished dish, or lower heat cooking. File image

Are burnt oils bad for your health?

Olive oil contains polyphenols, micronutrients that are high in antioxidants.

But they start to break down when exposed to high heat, meaning that health benefits of the oil decrease.

When unsaturated oils, including olive oil, are heated too much, some research has found that they can develop compounds with carcinogenic properties.

However other studies have disputed this, and say that they are safe to cook with.

Oils with a low smoke point are recommended for dressings, drizzling over a finished dish, or lower heat cooking.

With speciality oils on the rise, the market has grown from £47 million in 2019 to £51 million, according to research company Mintel.

The olive oil market has also risen from £158 million to £179 million during the same period, it reports.

But supply chain problems caused by Putin’s war in Ukraine mean that there are now limits on the amount of oil shoppers can buy.

Most of the UK’s sunflower oil comes from Ukraine and shortages have also increased demand for alternatives.

Morrisons and Waitrose are limiting customers to two purchases per person, and Tesco three. Iceland is also rationing its stocks of sunflower oil.

Sainsbury’s and Asda have not placed limits on its oils.

The British Retail Consortium’s (BRC) Tom Holder said the move was a temporary measure ‘to ensure availability for everyone’, reported the BBC.

He said that retailers are ‘working with suppliers to ramp up production of alternative cooking oils, to minimise the impact on consumers’.

According to the Office for National Statistics, cooking oils are almost a quarter more expensive than a year ago.

And retail research firm Assosia reported that a one-litre bottle of own-brand sunflower oil has gone up by an average of 12p to £1.26 since January 2022 — an increase of more than 10%.

How deadly is India's Covid variant and is it REALLY behind crisis?