The life of Justin Fashanu, the first professional footballer in England to come out as gay, and his brother John, is being adapted into an ITV drama by Bafta-nominated writer Kwame Kwei-Armah.

Aged 20, Justin became one of the first footballers to command a £1million transfer fee when he moved from Norwich City to Nottingham Forest in 1981.

The series, titled Fash, will dramatise how in 1981 his younger brother John signed to Norwich City, the same club where Justin made his name. 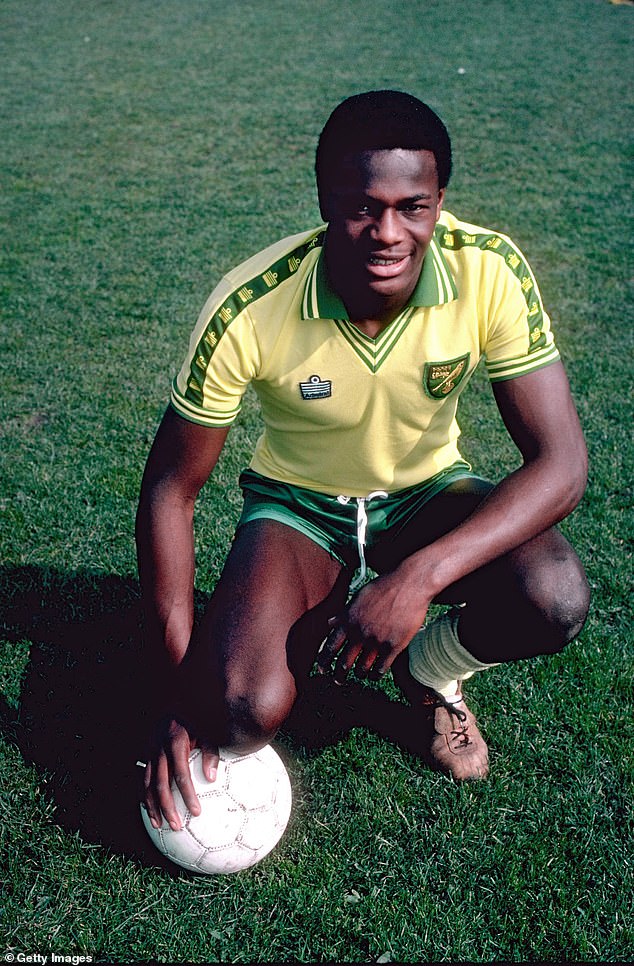 In 1990, Justin Fashanu hit headlines worldwide when he became the first professional footballer to come out as gay (pictured above in his Norwich City kit in April 1981) 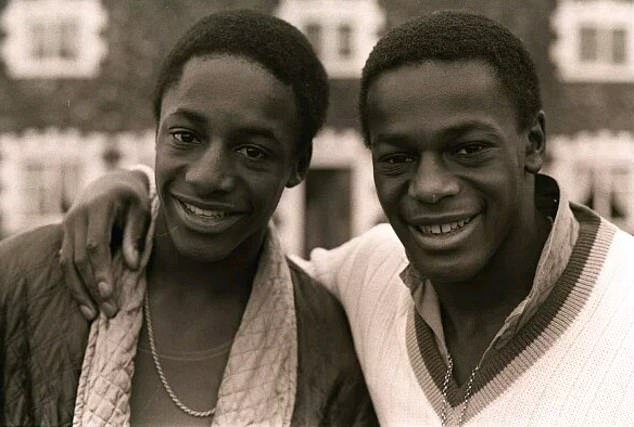 The series, titled Fash, will dramatise how in 1981 his younger brother John signed to Norwich City, the same club where Justin made his name.

As Justin’s ‘star fades’ and life becomes mired by pitch-side rumour and front-page tabloid headlines, John supersedes Justin as the ‘famous Fashanu’ and by the time of his death, the two are wholly estranged.

According to ITV, Fash will chart their lives from childhoods spent in Barnardo’s care homes to the care of a white foster family to their ‘tragic and irreconcilable’ estrangement played out in the media.

The series has been created with the help of John, serving as a consultant alongside LGBT campaigner Peter Tatchell.

John said: ‘I’m so pleased to be working with Kwame and Happy Prince on this project.

‘Much has been said and written about the relationship Justin and I shared over the years, but drama of this type has an ability to delve right to the beating heart and truth of events in a way other media can’t. 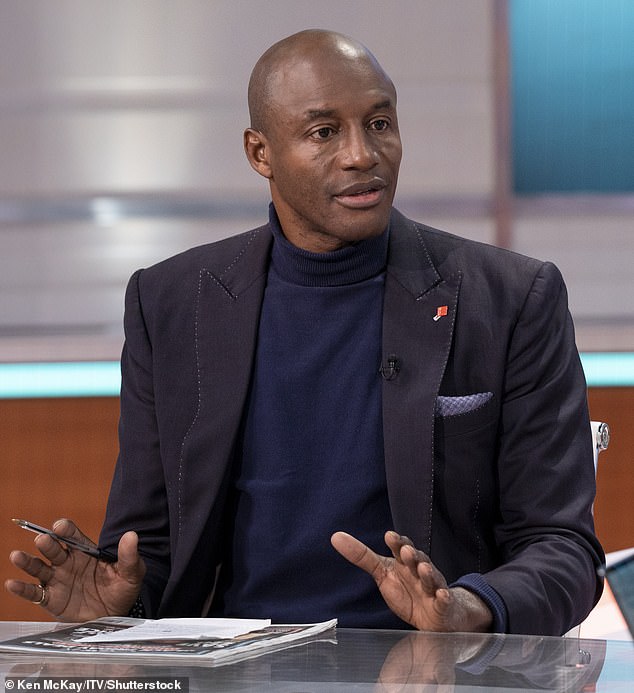 Justin’s brother John said: ‘Much has been said and written about the relationship Justin and I shared over the years, but drama of this type has an ability to delve right to the beating heart and truth of events in a way other media can’t’ 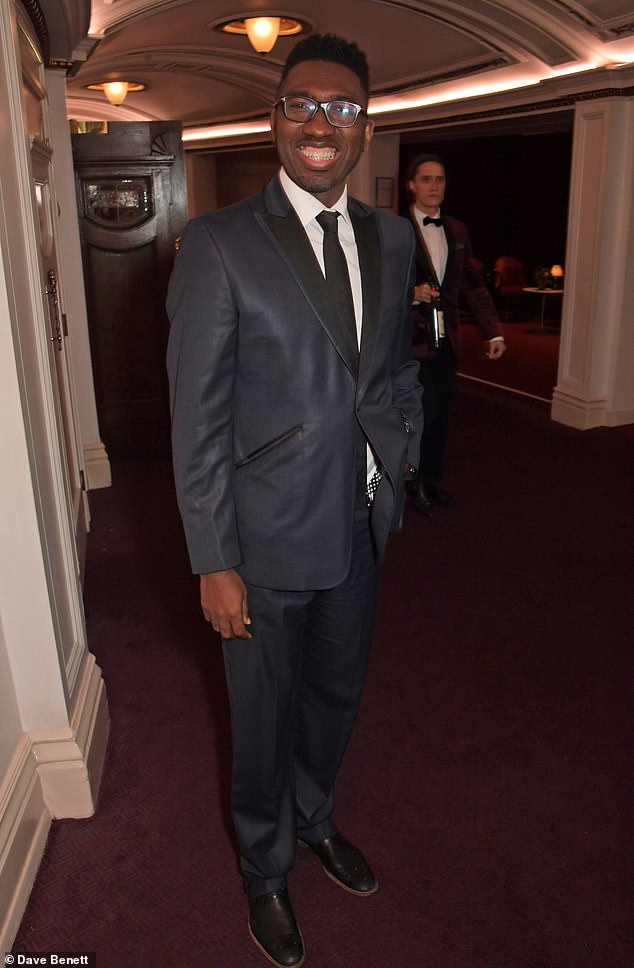 ‘I feel privileged to play a part in bringing it to the screen.’

Kwei-Armah, who is also artistic director of the Young Vic theatre, said: ‘I grew up watching the Fashanu brothers. I was fascinated by them. Inspired by them.

‘As an adult, my heart breaks for them. ‘The past is a foreign land’, the saying goes, ‘they do things differently there’.

‘In Fash, I wanted to dive into that past, particularly one that has so many resonances with today.’

Tatchell said: ‘This is a powerful, moving life story that needs to be told.

‘I am very honoured to act as a consultant to the production team, based on my friendship with Justin Fashanu in the 1980s.’

The series will be produced by Happy Prince, part of ITV Studios, and will premiere on ITV1 and also be available as a boxset on ITVX once the first episode has aired.

Tragic story of UK’s first pro footballer to come out as gay in 1990: How Justin Fashanu was disowned by his brother John who paid him £75K to keep his sexuality secret and warned he would ‘suffer the consequences’… eight years before his suicide

Justin Fashanu hit headlines worldwide in 1990 when he became the first professional footballer to come out as gay.

The striker was already by then a record-breaker, having been the first black footballer to command a £1million transfer fee, which was paid after he moved to Nottingham Forest from Norwich City in 1981.

But the revelations about his sexuality that were made in a newspaper interview sparked a downward spiral in his life that ultimately led to him taking his own life at the age of 37 in 1998.

His own brother, John, who was also a professional player, later admitted that he paid his sibling £75,000 to try to stop him coming out, because he did not want his family to be embarrassed. 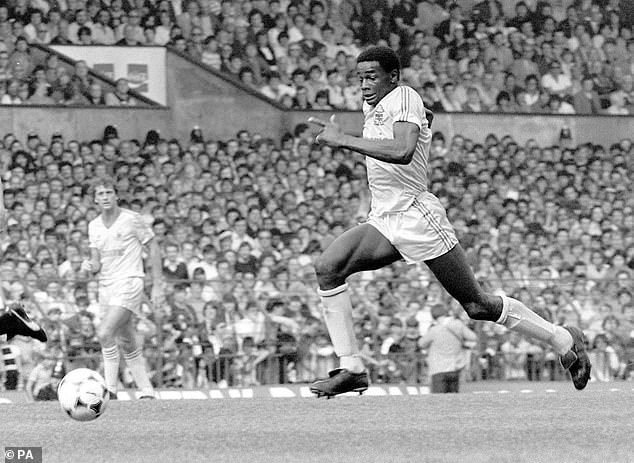 Justin Fashanu (pictured here in 1981) transferred to Nottingham Forest, who were managed by the legendary Brian Clough at the time, for a record-breaking £1million transfer fee

John condemned his brother in a TV interview when he came out, saying he would have to ‘suffer the consequences’ for going public and adding that he would ‘not want to play or even get changed with him’.

Having grown up in foster care with his brother, Fashanu’s career began well at Norwich City, where he played from 1978 until his £1million move to Nottingham.

His strike against Liverpool in 1980 was Match of the Day’s Goal of the Season, marking the player out as a hero in the eyes of Norwich fans.

During his time with the Canaries, he scored 35 goals in 90 appearances, cementing his status as an up and coming goal scorer.

However, the player only stayed at Nottingham Forest until 1982, after which he had stints at an array of clubs, including Notts County, Newcastle, Torquay United, Swedish side Trelleborg and finally amateur New Zealand team Miramar Rangers in 1997.

Gay rights campaigner Peter Tatchell said in 2011 that Fashanu had first wanted to come out in 1982 when he was still playing for Nottingham Forest.

The then manager, Brian Clough, allegedly challenged him about going to what he called ‘p**f clubs’.

‘I advised Justin to wait until he got his problems sorted out with Clough and got his football career more firmly established,’ Tatchell recalled.

Fashanu finally opted to come out in 1991, when he was desperate for money after the petering out of his career.

In the interview with The Sun, for which he was reputedly paid at least £70,000, he claimed to have had an affair with an unnamed married Conservative MP.

He later said he was ‘under pressure’ from the paper to make revelations that would prove popular with readers.

A week after his brother came out, John Fashanu criticised his sibling in an interview with newspaper The Voice, under the headline: ‘John Fashanu: My gay brother is an outcast.’

After coming out, Justin’s career continued to decline. His last playing days in England came with a two-year spell at Torquay United until 1993, after which he played in Scotland, Sweden, the US and then New Zealand.

In 1998, the player was accused by a 17-year-old boy of sexual assault in the US. After fleeing to the UK, he was found dead two months later in a lock-up in Shoreditch, east London.

He wrote in a suicide note: ‘I realised that I had already been presumed guilty. I do not want to give any more embarrassment to my friends or family.’

In 2018, John Fashanu admitted that he had been a ‘monster’ to his brother when he came out as gay.

In 1998, the player was accused by a 17-year-old boy of sexual assault in the US. After fleeing to the UK, he was found dead two months later in a lock-up in Shoreditch, east London (pictured here during a training session in 1993, with film star Vinnie Jones next to him)

‘It was a lack of education,’ the former Wimbledon and Aston Villa striker told ITV’s Good Morning Britain.

‘I was looking at the situation around us and my mother had cancer and was dying, and the rest of the family couldn’t understand the situation.

‘We didn’t know what to do, the best thing I thought to do was to keep it quiet.’

John added that he wanted the Football Association to help other players who want to come out.

‘The FA needs to create an environment where gay footballers are comfortable to come out and say ‘I’m gay’,’ he said.

His conciliatory comments came six years after he had claimed that his brother ‘wasn’t really gay’ and instead ‘just wanted attention’.

The former player also admitted that his relationship with his brother was ‘strained’ when he took his own life.

Paedophile private tutor was allowed to CARRY ON teaching youngsters

Bill Pullman hits back at Trump for tweeting spoof video