Home » World News » ‘Lock up the Bidens,’ Trump says as he struggles to reverse his deficit

President Donald Trump called for Joe Biden and his family to be jailed, escalating his attacks on his Democratic opponent over unsupported accusations as he struggles to reverse his deficit in the polls.

"Lock up the Bidens. Lock up Hillary," Trump declared at a rally in Macon, Georgia, stoking the crowd that chanted "lock him up" in favour of the Democratic candidate's imprisonment. 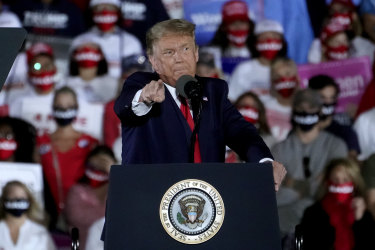 Donald Trumps speaks at a rally in Georgia on Friday night. Credit:

"We've learned over the last couple of months: Joe Biden is a corrupt politician," Trump said to his supporters, "and the Biden family is a criminal enterprise."

Trump frequently demanded that his 2016 Democratic opponent, Hillary Clinton, be incarcerated over her use of a private email server as secretary of state. It was believed to be the first time he has ever used that sort of attack against the Bidens.

The FBI declined in 2016 to recommend charges against Clinton for sending a small number of classified emails through a private server at her New York home.

The Census must adjust to coronavirus crisis — just like everything else

Who are Meghan Markle's parents, are her mother Doria Ragland and father Thomas together still and who are their relatives?