Lorry driver, 30, who got high on cannabis and cocaine before ploughing into a cyclist, 50, and killing him instantly is jailed for three-and-a-half years 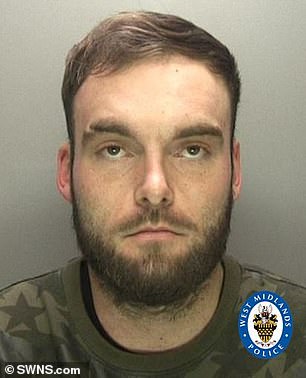 Joseph Large, 30, (pictured) has been jailed after he killed a cyclist in his 32-tonne refuse truck while high on cocaine and cannabis

A lorry driver has been jailed after he killed a cyclist in his 32-tonne refuse truck while high on cocaine and cannabis.

Joseph Large, 30, ploughed his Volvo skip loader into Paul Thompson, 50, who was crushed to death in the horror crash.

Police arrested Large at the scene and tests revealed he had taken cannabis and had 158mcg of cocaine in his blood – three times the permitted level.

Mr Thompson was cycling along Culwick Street, Wolverhampton, West Midlands, at 2.30pm when Large collided with him, killing him instantly.

He initially told police he did not see Mr Thompson because he was dazzled by the sun when he pulled out of a junction.

But following a trial at Stoke-on-Trent Crown Court, Large was found guilty of causing death by careless driving while under the influence of drugs.

On Friday, Large, from Coseley in the West Midlands, was jailed for three-and-a-half years and banned from driving for two years.

The judge told him: ‘You had a duty of care whilst driving a vehicle of that size, especially to vulnerable road users.

‘But you were complacent about your knowledge of the junction and this was an avoidable accident.’

The court heard Mr Thompson, from Bilston in the West Midlands, was 12 weeks away from retiring when he was killed in the crash on November 26, 2018.

Speaking after the case, PC David Crump, of West Midlands Police, said: ‘As a professional lorry driver, Large’s driving should have been of the very highest standards.

‘But he got behind the wheel of a 32-tonne lorry having previously consumed cocaine and as a result of his actions Mr Thompson sadly lost his life.

‘Our thoughts go out to Mr Thompson’s family at this difficult time.

‘And we would urge anyone to think twice before driving if they have had alcohol or taken drugs, as they can be putting the lives of other people in danger, as well as putting their own safety at risk.’

Scene from ‘The Office’ helps Arizona man save woman’s life