A Los Angeles-area homeless encampment near the venue slated to host Super Bowl LVI was cleared out Tuesday after reports of people setting fires in the area.

The California Department of Transportation, or Caltrans, said the encampment near SoFi Stadium in Inglewood needed to be cleared because of a fire safety issue. The venue will host the NFL’s annual championship affair on Feb. 13. 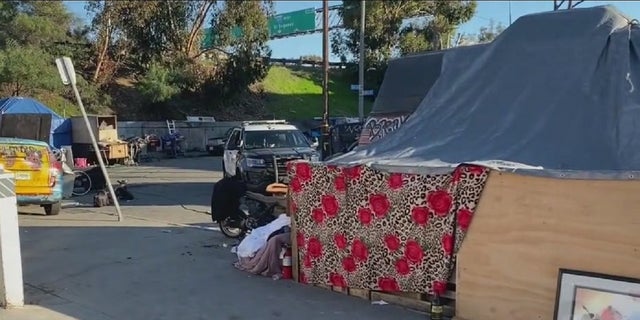 A homeless encampment near SoFi Stadium in Inglewood, California was cleared out Tuesday. The venue is slated to host Super Bowl LVI on Feb. 13.
(FOX 11 Los Angeles)

“Caltrans’ responsibility is to ensure the safety of the traveling public and to protect and maintain California’s highway infrastructure,” a Caltrans statement said. “The department is coordinating with local partners to provide outreach and support including Los Angeles Homeless Services Authority (LAHSA).”

The agency told Fox News that the encampment was located near the Century Boulevard on-ramp to the busy northbound Interstate 405.

A spokesperson for the California Highway Patrol told Fox News there were reports of people setting fires in the area.

Caltrans posted a notice at the site on Jan. 20 in advance of the cleanup to allow people who were staying to gather their things, it said. The agency also provided them with information on services they can take advantage of.

The agency said it collected any personal belongings left behind and will bring them to a maintenance yard so the items can be retrieved later. 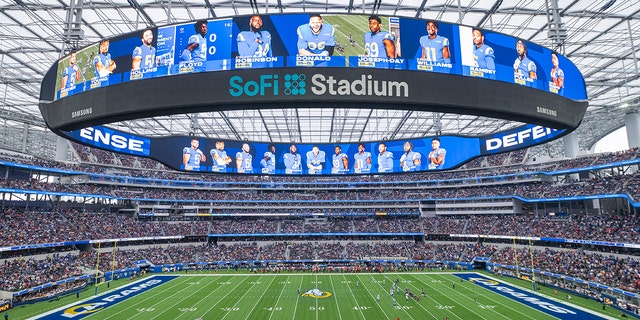 This is a general overall interior view of SoFi Stadium as the Los Angeles Rams takes on the Tampa Bay Buccaneers in an NFL football game on Sept. 26, 2021, in Inglewood, Calif.
(AP Photo/Kyusung Gong, File)

CHP officers were involved in the operation as a safety precaution.

The cleanup came days before Sunday’s NFC Championship Game between the Los Angeles Rams, which shares the stadium with the Los Angeles Chargers, and the San Francisco 49ers.

Los Angeles County has struggled to manage its growing homeless population in recent years. In 2020, the Los Angeles Homeless Services Authority said more than 66,400 people were experiencing homelessness in the county, according to a point-in-time count. 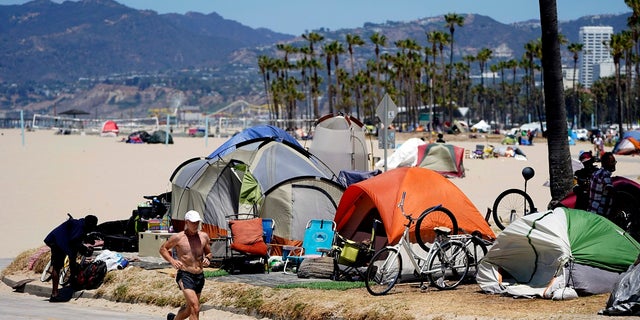 A jogger walks past a homeless encampment in the Venice Beach section of Los Angeles.
(AP)

The figures represented a nearly 13% increase from the last count, where many were found to be living on the street, in tent encampments, in makeshift dwellings and in vehicles. Last week, LAHSA announced it will postpone its 2022 count until Feb. 22-24 because of the COVID-19 pandemic.

Europe sees ‘alarming rates of transmission’ of COVID-19, WHO warns