Paris: French President Emmanuel Macron said on Tuesday he wanted to “piss off” the unvaccinated – a slangy, cutting remark that prompted howls of condemnation from opposition rivals less than four months before the next presidential election.

“The unvaccinated, I really want to piss them off. And so, we’re going to continue doing so, until the end. That’s the strategy,” Macron told Le Parisien newspaper in an interview published late on Tuesday. 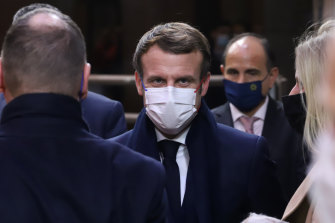 The expression “emmerder”, from “merde” (shit), can also be translated as meaning “to get on someone’s nerves”, “to annoy” or “to make life difficult for someone”. It is considered “very informal” by French dictionary Larousse and is widely used by people in all levels of French society, including children. It is not regarded as being as strong as its English equivalent.

France last year put in place a health pass that prevents people without a PCR test, proof of vaccination or recent infection to enter restaurants, cafes and other venues. The government wants to turn it into a vaccine passport that removes testing and previous infection from the equation.

The pass will also be required on inter-regional trains and buses, and on domestic flights.

Veran said Macron’s interview demonstrated his “intention, above all, to protect the population.”

On Wednesday, the President’s spokesman went on the attack.

“Who is pissing off who today?” Gabriel Attal said, citing health workers struggling to cope and businesses hurt by the pandemic. “It’s those who refuse the vaccine.”

Critics accused Macron of behaviour unbecoming a president and of targeting the unvaccinated to win support from the 90 per cent of French adults who are fully vaccinated.

Macron’s supporters suggested the President simply expressed out loud what many vaccinated people already think about the non-vaccinated in a country with bitter divides over the issue.

Veran told parliament on Wednesday that confirmed new cases for the day stood at around 335,000, marking a new high.

Omicron is racing across the country, burdening hospital staff and threatening to disrupt transportation, schools and other services as workers and students call in sick.

Macron’s government is straining to avoid a new economically damaging lockdown that could hurt his re-election prospects. Ministers are instead trying to rush the vaccine pass bill through parliament in the hope that it will be enough to keep hospitals from becoming overwhelmed.

More than 20,000 people are hospitalised with COVID-19 in France, a number that has been rising steadily for weeks but not as sharply as the country’s infection rates.

COVID-19 patients fill more than 72 per cent of France’s intensive care beds. Most virus patients in ICUs are not vaccinated against, though 77 per cent of the French population has had at least two doses.

Macron has been criticised in the past for off-the-cuff remarks that have come across as arrogant, cutting or scornful.

Translations of his most recent comments into English set off an immediate debate among amateur French linguists about the context and meaning of Macron’s words.

9 pairs of winter boots that are warm, waterproof and under $100