Cold case detectives have arrested a 58-year-old man over the murder of an elderly man and his sister more than 30 years ago.

Doris McCartney and Ronald Swann were killed in their Moorabbin home on October 22, 1989. There were no signs of forced entry and nothing had been taken. 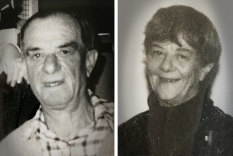 On Thursday, the man was arrested in Rowville, in Melbourne’s south-east.

He is being interviewed by detectives.