A man who allegedly posted semi-naked photos online of a Finks Motorcycle Club female associate is suing Victoria Police, claiming officers sat outside his house in a patrol car as patched bikies bashed him in a revenge attack.

Assault victim Nicholas Gold claims Victoria Police failed to intervene when members of the Cranbourne Chapter of the Finks invaded his home and struck him in the face with a metal bar multiple times. 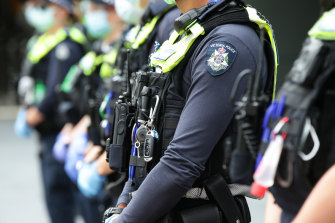 Victoria Police is accused of failing to protect the victim of an assault.Credit:Paul Rovere

Bikie associate Tara Egglestone had been in a tit-for-tat feud with Mr Gold and believed he had stolen her boyfriend’s car. On September 5, 2018, police had thwarted a plan by the patched members to steal Mr Gold’s motorcycles as payback.

But two days later, Egglestone found a fake Facebook profile in her name which had published revealing photos she suspected had been uploaded by her former boyfriend and his friend, Mr Gold, according to court documents.

Phone intercepts captured Finks boss Brent “BJ” Reker telling Egglestone he would seek revenge on her behalf and that the victim would “never walk again … he’s going to be in a wheelchair”.

Police continued to monitor Mr Gold’s Hampton Park home, and on September 9, 2018, according to court documents, prosecutors say officers sat in a marked police car outside the house and did not intervene as four men exited a burnt orange Holden SV6 and entered the house. 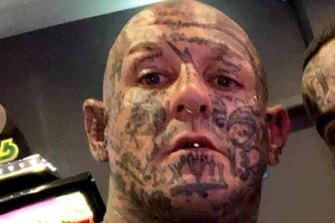 The men “were wearing Finks motorcycle club clothing and entered without the consent of the residents”, according to court documents.

Once inside, the bikies punched, kicked and struck Mr Gold in the face multiple times with a metal implement similar to a crowbar as they grilled him about the Facebook photos.

Mr Gold’s father and girlfriend were present during the attack, during which one bikie warned: “Let’s just blow his kneecaps out and kill the girl.”

When the men left, one told Mr Gold, “if you go to the police, we will kill your missus and your kids, too”, according to sentencing remarks published by County Court judge John Lyons last month. 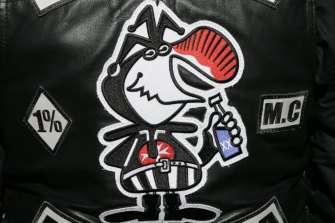 According to Mr Gold’s claim lodged in the Victorian Supreme Court last month, police owed him a duty of care because they knew, or ought to have known, that the four assailants were planning to attack him because they had prevented an attack days earlier.

“The police officers represented to [Mr Gold] that they would keep the property under surveillance and did do so at the time of the assault,” court documents claim.

“As a result of those representations, [Mr Gold] relied on the police offers to prevent any assault on him by Reker, Martinow, Williams and/or Wanakore-Moeke (the attending Finks).”

Court documents say that at the end of the assault, Reker told Mr Gold that he would be back for the motorcycles.

Mr Gold was left with two facial fractures and a dislocated jaw. He is seeking unspecified damages from Victoria Police and the state government, along with interest and legal costs.

Egglestone in August pleaded guilty to conspiracy to commit burglary and intentionally cause injury, though she was not present during the assault. The Sunday Age is not suggesting Egglestone is a member of the Finks Motorcycle Club. She faces a sentencing hearing in December.

Police and paramedics found Reker, 35, dead in the Ravenhall Correctional Centre in December 2019 after being called to his cell to treat him for cardiac arrest. The coronial investigation into his death is still ongoing. 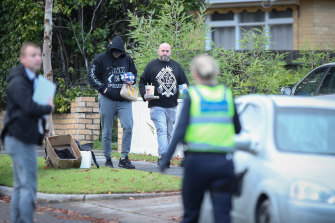 Men visit Mr Reker’s property which was the target of a drive-by shooting in 2018.Credit:Simon Schluter

Victoria Police and lawyers for Mr Gold declined to comment. Lawyers for Egglestone did not respond to repeated requests for comment.

Britain has the HIGHEST rate of excess deaths in Europe