A Maryland man out on probation after a burglary conviction was tracked to the inside of the U.S. Capitol on the day of the Jan. 6 riot by his GPS monitor, after he received permission from parole supervisors to travel to Washington, D.C., to purportedly hand out Bibles with a religious group, the FBI said.

BARR ‘NOT SUPRISED’ TO SEE VIOLENCE AT CAPITOL, SAYS IT CANNOT BE TOLERATED

Bryan Betancur, from Silver Springs, Md., contacted his parole officer two days after a mob stormed the nation’s Capitol in a violent attack that left five people dead to let him know that he was worried that the FBI was watching him and that photos of himself would surface at the Capitol after the insurrection. 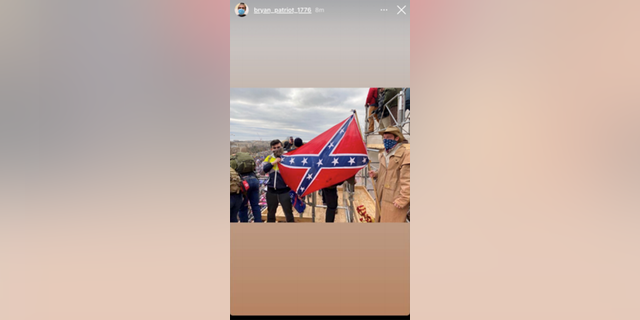 Bryan Betancur, left, posing with Confederate flag on Jan. 6 at the Capitol riot.

The parole officer then contacted the FBI to report Betancur. Photos turned over to law enforcement officials that appeared on social media allegedly show Betancur posing with a Confederate flag while standing on scaffolding outside the west side of the Capitol building.

In another photo, Betancur allegedly posted a selfie wearing a Proud Boys T-shirt and making the “OK” hand sign, a popular gesture for white supremacist groups. 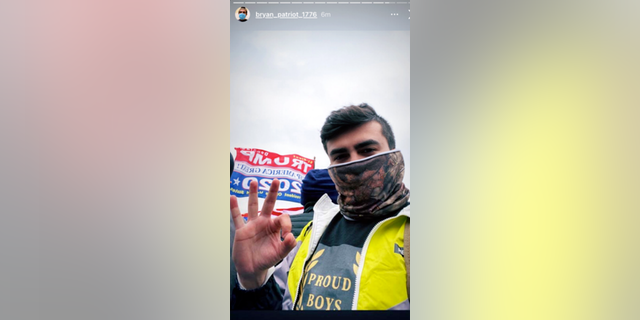 While out on parole, Betancur, whom the FBI says is a self-described white supremacist, was active on racially motivated supremacist Internet groups and became increasingly vocal about wanting to carry out a “lone wolf attack” or a mass shooting, according to an FBI affidavit for his arrest.

The FBI said Betancur voiced support for James Fields, who was convicted for killing a woman with his car during a white nationalist rally in Charlottesville, Va., in 2017 and reportedly stated that he, too, wanted to run people over with a vehicle and kill people in a church. Betancur later told authorities he had changed his mind about hurting people, the FBI said.

Betancur received approval from parole supervisors to travel to D.C. to distribute Bibles with Gideon International, an evangelical Christian group. His GPS tracking device, however, showed him around the vicinity of the Capitol between 2 and 5 p.m., including inside the building, according to the FBI.

Betancur is facing several charges in the incident, including unlawful activities on Capitol grounds and entering a restricted building.

What is the Rice Purity Test?