Washington: During a recent visit to Detroit, Michigan, I got talking to Frank DiMercurio, a project manager who voted for Donald Trump in 2016 and plans to vote for him again this year. When asked about Democratic nominee Joe Biden, he brought up the topic of presidential debates as an example of why Biden is a weak candidate.

"If Biden gets into a debate with Trump, it won't be good for him," DiMercurio said. "He'll do a lot of stammering that will make him look bad."

Just last week, Trump supporters in Florida I spoke to were still confidently predicting that Biden would find an excuse not show up to the first debate on Wednesday (AEST). 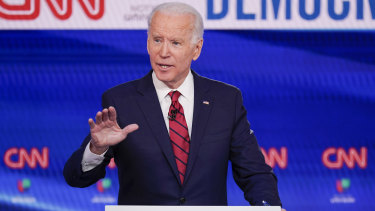 The Trump campaign is now describing Joe Biden as a “master” when it comes to debate in order to raise expectations for the Democratic nominee. Credit:AP

The debate will be live-blogged on Sydney Morning Herald and The Age.

Part of the reason for these low expectations is Biden himself: the famously verbose 77-year old is prone to verbal slip-ups (in a speech last week he referred to the "200 million" Americans who had died from COVID-19, rather than 200,000).

The other reason is the way Biden has been portrayed by Trump and his conservative media allies – not just as inarticulate but as senile. Many of the Trump campaign's advertisements have been deceptively edited to make Biden appear even older and less coherent than he is. 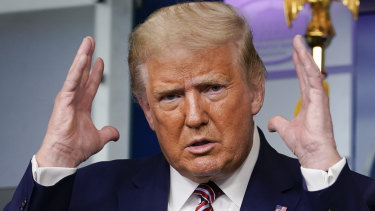 One of the unintended consequences of this strategy has been to set the bar so low for Biden that he could emerge from the debates as the winner simply by showing up and performing competently.

Aware of this risk, Trump's campaign has spent recent days trying to build up Biden by pointing out that he performed well in his two vice presidential debates and survived 11 debates in the Democrat primaries.

Trump himself has accused Biden of taking performance enhancing drugs – an apparent acknowledgment that Biden may end up having a good debate.

Given he is trailing Biden in the polls by an average of seven points, it is Trump who most needs a thumping debate victory to give his campaign a surge of momentum.

So far the Republican and Democratic conventions, riots in cities like Kenosha, Wisconsin, and the death of Supreme Court justice Ruth Bader Ginsburg have not led to significant movements in the polls.

Americans have had four years of Trump's presidency to make up their minds about him, and the vast majority already have already done so. At this stage of the game, Trump is never going to be a broadly popular president. His best hope is to use the debates to make Biden a less unappealing choice by hammering his opponent's past support for unpopular free trade deals and the war in Iraq.

As for Biden, he faces the challenge of sparring with an unpredictable opponent who will almost certainly unleash a torrent of falsehoods and exaggerations. Biden will be wasting time if he tries to to fact check everything Trump says or gets bogged down defending votes he cast in the Senate decades ago. He needs to avoid waffly answers and will have to watch his temper if Trump goes after family members including his son Hunter.

Biden will attack Trump over his handling of the coronavirus and seize on The New York Times' revelations that Trump paid just $US750 in federal income tax in 2016 and 2017. But he needs to devote enough time to make the case for how his own policies – such as raising the minimum wage or making university more affordable – would make life better for American voters. It can't just be all about criticising Trump.

The key audience for both candidates is the small but crucial subset of voters who disapprove of Trump's performance but haven't yet been convinced to support Biden. These voters aren't hugely ideological, or have policy views that pull them in different directions (like opposing abortion but being in favour of gun control).

With the Democratic and Republican bases already fired up, the winner of the debate will be the candidate who makes the most compelling case to those wavering voters in the middle.

Our weekly newsletter will deliver expert analysis of the race to the White House from our US correspondent Matthew Knott. Coming soon. Sign up now for the Herald‘s newsletter here, The Age‘s here, Brisbane Times‘ here and WAtoday‘s here.

Who is Deepika Padukone and why is she trending?