The mystery phallus scrawled on a window at one of the properties that retired basketball star Andrew Bogut and wife Jessica plan to demolish to make way for their $4.7 million forever home has offended the sensibilities of the local mayor.

For those who came late, Bogut has been locked in a planning dispute with Melbourne’s Bayside Council over his desire to knock down two adjoining properties in the bayside suburb of Beaumaris. Councillors said no, but Bogut had already taken the matter to the Victorian Civil and Administrative Tribunal, fed up with the pace of the process. 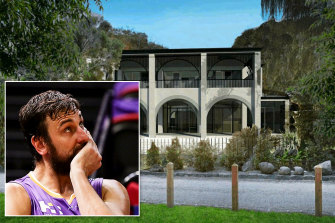 Graffiti can have a “particularly negative impact on a landowner and their property,” he says.

“In this instance, the impact is greater due to the current planning application being sought for the property, which has been subject to considerable media attention.”

You can say that again, Mr Mayor.

In March, all five attending members of the Bayside Council’s planning committee voted against giving a permit to the development. All councillors supported the decision and gave seven grounds for refusal, including the loss of significant trees.

“Council’s unanimous decision reflected community concerns, which included the build’s sizeable footprint, removal of vegetation, the overall building height and the design not responding to the amazing site and surrounds that are truly valued by the community,” the mayor said.

One teeny omission from the Mayor’s statement: council planners approved the 2300 square metre development which prompted Bogut to slate the council decision.

“It’s a political game. What’s the point of the planning division?” he said. 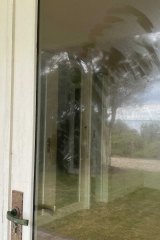 A door at Andrew Bogut’s home after cleaners removed the offending image.

“All five councillors voted against their own planning division.”

Despite the looming VCAT case, Evans struck a conciliatory note.

“Council can assist in supplying materials for its removal, if requested by the property owner,” he said.

No need in this case. Bogut’s crack team of cleaners immediately removed the offending image. However, a photo of the window post cleanup was taken, but this is not expected to form part of Bogut’s VCAT submissions.

Acestor of Henry Dundas says he was an abolitionist