Home » World News » McEnany: Who will be 'erased' next after Trump won't rename bases

‘Who will get erased next?’ White House press secretary says George Washington and Thomas Jefferson could have their names removed if Confederate generals’ names are stripped from bases – then says Joe Biden could be a victim too

She also pointed at comments presumptive Democratic nominee Joe Biden made about working with segregationist senators – and suggested he could be impacted by the fallout too. 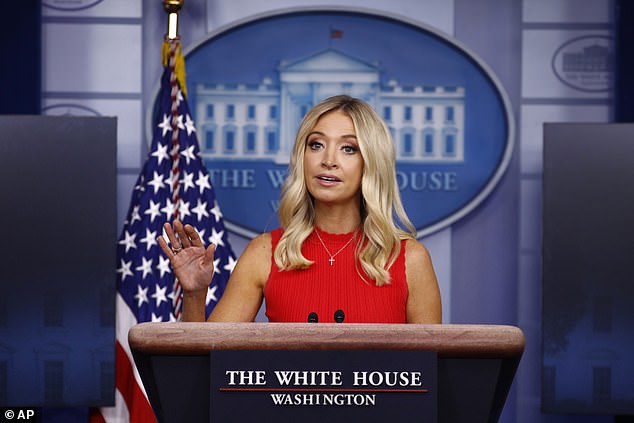 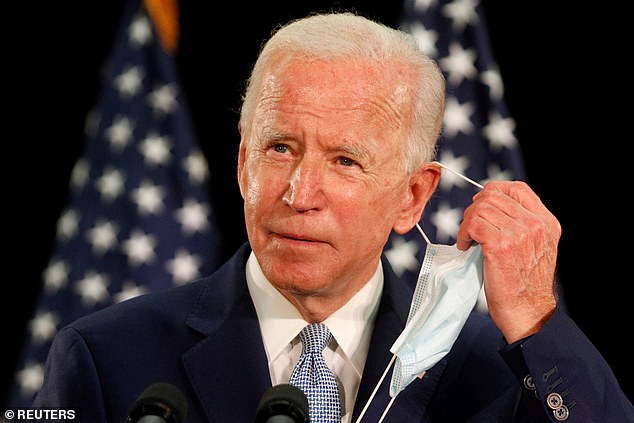 Kayleigh McEnany even brought up Joe Biden, who got in political trouble last June for boasting that he’d been able to work with segregationists while in the U.S. Senate

‘And finally what about people that are alleged by the media to be segregationists?’ McEnany said referencing Biden and the news coverage that came after he made the controversial comments last June.

McEnany also brought up the decision to pull the Civil War-era drama ‘Gone with the Wind’ from the HBO Max library.

‘I’m told that no longer can you find on HBO “Gone with the Wind,” because that is somehow now offensive,’ McEnany said.

President Trump had announced minutes before Wednesday’s press briefing that he ‘will not even consider’ renaming American military bases that were named after leaders of the Confederacy.

‘These Monumental and very Powerful Bases have become part of a Great American Heritage, and a history of Winning, Victory, and Freedom,’ Trump tweeted.  ‘The United States of America trained and deployed our HEROES on these Hallowed Grounds, and won two World Wars,’ the president continued.

‘Therefore, my Administration will not even consider the renaming of these Magnificent and Fabled Military Installations,’ Trump said.

The ‘Black Lives Matter’ protests that have taken place all across the nation in the aftermath of George Floyd’s death have renewed discussions on the appropriateness of memorializing Confederate figures.

Southern states that joined the Confederacy during the Civil War-era did so in order to keep their status as slave states.

On Monday, Army Secretary Ryan McCarthy told Politico that he was ‘open’ to renaming these 10 facilities.

Politico reported that Defense Secretary Mark Esper – who has been at odds with Trump over how to deal with the ‘Black Lives Matter’ demonstrations – also supported the discussion.

McEnany opened up her Wednesday briefing reading a statement from Trump that mirrored his tweets.

She said the president would go as far as vetoing legislation if there was a name change.

The president has long sided with the ‘heritage’ argument to keep Confederate monuments and memorials erected.

In the past he’s also defined it as a slippery slope.

Trump voiced concerns about erasing George Washington and Thomas Jefferson from American landmarks directly after he made his controversial ‘very find people on both sides’ remark about the Charlottesville protests in August 2017.

The president said that some people who had gathered in the Virginia town – among white supremacists, KKK members and neo-Nazis – were concerned about the tear-down of a ‘very important statue’ of Confederate Gen. Robert E. Lee.

Behind closed doors, as reported in ABC News’ Jonathan Karl’s book ‘Front Row at the Trump Show,’ Trump told advisers – including former Attorney General Jeff Sessions and Chief of Staff John Kelly – that while he knew the KKK and neo-Nazis were ‘bad,’ ‘the issue for Trump was that the protesters in Charlottesville were taking up a good cause by fighting to keep the statue of Robert E. Lee in a prominent place,’ Karl wrote.

Trump’s next thought, Karl described, was ‘next will be Washington and Jefferson.’

‘Nobody jumped in to agree with the president or to challenge him. Nobody in the room suggested to him that praising Confederate generals was the inappropriate thing for a president to do under any circumstances, let alone after all that had gone down in Charlottesville just two days before,’ read Karl’s account.

Karl added that Kelly, a four-star general, chimed in to say he agreed about the ‘greatness of the Confederate generals and on [Trump’s] point about Washington and Jefferson.’