Fireworks can return to the MCG after a review found 3500 square metres of flammable cladding that covers part of the stadium’s Northern Stand does not pose a fire safety risk.

A fireworks show at the AFL season opener between the Western Bulldogs and Melbourne was called off in March after concerns were raised over the fire risk of the stadium’s cladding. But in a decision last week, the Building Appeals Board of Victoria determined the majority of the MCG’s cladding met its safety requirements. 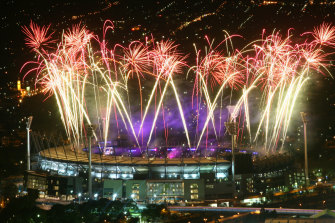 The board’s decision means fireworks can return to the MCG. Credit:Penny Stephens

The board found there was “some risk” involved in the use of pyrotechnics but this risk was not specific to the retention of the flammable cladding.

The board ordered the Melbourne Cricket Club to remove aluminium composite panels and combustible insulation from the area at the Hugh Trumble Cafe at Bay 38; the area immediately above the sun sails at the outdoor restaurant and bar at Bay 40; behind the signage outside Gate 1 and Gate 3; and the solar panels at Bay 50.

It noted the MCC had already removed all cladding containing a 100 per cent polyethylene core, the cladding with the highest risk, when it replaced 1900 square metres of cladding from the Great Southern Stand in 2019 and from the Northern Stand in 2021.

An MCC spokeswoman said “minor” works would be required to remove the small amount of cladding identified as at-risk by the board and the stadium would not have to close.

The expected cost of the work is still to be determined.

“We’re pleased to have a resolution following the Building Appeals Board’s determination and look forward to our continuing relationship with relevant authorities in ensuring the ongoing safety of all visitors to the MCG,” MCC chief executive Stuart Fox said.

A spokeswoman for Fire Rescue Victoria said the service accepted the decision of the appeals board.

“We have been working with the MCG to review emergency management arrangements on site to ensure the continued safety of the community,” she said.

Concerns about cladding in Victoria have been fuelled by the Lacrosse tower fire in Docklands in 2014, the 2017 Grenfell Tower fire that killed 72 people in London and a fire at the Neo 200 apartment block in the Melbourne CBD in 2019.

In 2017, the government established the Victorian Cladding Taskforce to investigate and address the problem. A statewide audit of 2200 buildings identified hundreds of high-risk cladding fire instances. The government then began a $600 million rectification program.

Lawyer Hubert Wajszel of Barry Nilsson Lawyers said the decision on the MCG cladding was an “important and welcome shift” from a conservative approach to assessing compliance previously adopted across the country.

“The decision recognises the reality that fire safety is not absolute and risk cannot be totally eliminated,” he said.

More than half of bad dreams people experience revolve around pandemic

Horror graphic shows most cases in Australia are imported from EUROPE