West Australian Premier Mark McGowan has likened alleged threats to behead himself and his family to “Islamic fundamentalism” and urged the public to distance themselves from “extremist” anti-vaccination groups.

Perth detectives have charged two young men after they allegedly left a number of threatening messages on Mr McGowan’s phone at about 11pm on Saturday, including a threat to behead the Premier and his family. 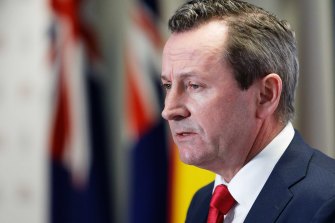 The charges are the latest escalation in increasingly violent threats against Australian politicians with Mr McGowan, his wife and children, and his office staff the target of increasingly vocal anti-vaccination and anti-mandate movements.

State security investigation group detectives charged a 20-year-old Canning Vale man and 18-year-old Harrisdale man over the messages. Both men were charged with one count each of acts creating false apprehension as to the existence of threats or danger.

They received bail subject to conditions and are due to appear in Armadale Magistrates Court on December 17.

Threats against Mr McGowan have increased since his government announced its vaccine mandate in October which requires about 75 per cent of the state’s working population, or 1 million people, to get the COVID-19 vaccine by January or lose their job.

Shortly after the mandate announcement, Mr McGowan’s personal phone number was leaked on anti-vaccination messaging groups and his phone was bombarded with threatening messages.

Mr McGowan said the alleged messages were “un-Australian” and the worst he’d seen, but they would not change his government’s stance on the vaccine mandate.

“These sorts of threats, intimidation, violence, extremism [are] dangerous, it’s unhelpful, and it’s not going to change anything the government does,” he said.

“All this stuff is concerning. You can’t say it’s not, it’s the sort of stuff that Islamic fundamentalists do. It’s Syria. It’s not the Australian way.

“These people are not good people.”

Following the charges, Mr McGowan conceded he and his family were considering moving from his publicly known address in his electorate of Rockingham, south of Perth, though he said there were no plans to relocate at the moment.

Mr McGowan also took aim at the group of federal MPs pressuring the Coalition government to wind back state vaccine mandates, describing them as unfit for Parliament, and warned Prime Minister Scott Morrison against pandering to them.

“I view them very dimly, they’re just political opportunists; they’ll do anything to get some attention and win some votes, say and do anything, including endangering people’s lives,” he said.

“They’re conspiracy theorists, they’re strange, they’re shocking people, and I’d urge people not to listen to them, including the Prime Minister.

“The Prime Minister of Australia should not be trying to appeal to those people. What he should be trying to do is support us in getting people vaccinated because that’s the way through this.”

The most recent threats against Mr McGowan follow two other serious incidents that resulted in arrests.

A few days after the WA mandate was announced, Perth father Jamon Hartzer was arrested over alleged death threats to Mr McGowan and several other politicians including Mr Morrison and Victorian Premier Dan Andrews.

Police allegedly uncovered registered guns in an unlocked cabinet in a raid on Mr Hartzer’s property.

Mr McGowan was also forced to close his electorate office earlier this month as staff were sent rape threats.

Another man was arrested on November 8 after allegedly attempting to deliver an old British armoured war vehicle with a fake gun turret to the Premier’s Rockingham electorate office.

On November 21, Mr McGowan had to be led to safety by police after protests hurled abuse at him during a visit to Eaton, near the South West town of Bunbury.

Police are also investigating the alleged assault of the daughter of Animal Justice Party MP Andy Meddick, who has announced his support for the pandemic bill.

Mr Meddick said last week he believed the alleged assault occurred because of his stance on the bill.

Perth’s protests have so far not resulted in any violence.

About 10,000 people marched in the streets of Perth’s CBD on Saturday to protest the mandate, holding signs with slogans including “I just love Mark McTwat”, “coercion is not consent” and “my body, my choice”.

A protester who did not want to be named told WAtoday on Saturday she was vaccinated but was marching for the right for others to choose what they did with their bodies.

Others described how they were willing to quit their high-paying mining jobs to avoid getting the vaccine.

Army drive trucks filled with bodies through streets of Italy