West Australian Premier Mark McGowan has defended his relationship with billionaire Kerry Stokes while saying he could “not recall” whether he phoned him to influence the editorial direction of his media outlets to favour the government in August 2020.

As the McGowan-Palmer defamation verdict was handed down on Tuesday, the premier finally answered questions about his relationship with the media mogul since the case revealed a chummy text exchange between the pair. 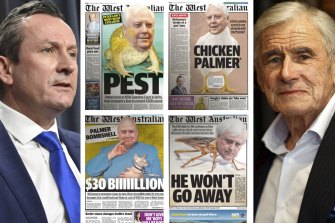 Stokes-owned newspaper The West Australian was a fierce critic of Clive Palmer.Credit:WAtoday

When asked about the appropriateness of their relationship, given the government’s many business dealings with Stokes, McGowan said he “rarely” contacted him and had relationships with many businesspeople.

“I’m the treasurer, I was the minister for state development, and I’m the premier, so you could go through virtually every major company and every major investor in Western Australia, at some level, I’ve had contact with them,” he said.

“I find [Stokes] to be an engaging and interesting person and a committed West Australian who has done a great many good things for the state.”

The personal texts from the premier’s mobile peeled back the curtains of power in WA, revealing the mutual admiration between the pair as McGowan gave Stokes a heads-up a minute before the extraordinary legislation was introduced to WA Parliament on August 11, 2020.

The “anti-Palmer” legislation blocked a $30 billion compensation claim by Clive Palmer over the stalled Balmoral South Pilbara iron ore project and McGowan texted Stokes that he would call later to discuss it.

“Kerry, we’ve just introduced legislation to block a claim by Clive Palmer against the state of WA for $28 billion. The claim was currently in arbitration and was based on two decisions [former WA premier] Colin Barnett made in 2012 and 2014,” McGowan texted Stokes at 4.59pm.

“Barnett rejected a proposal by Palmer to develop the Balmoral South mine … the risk is too great … obviously he won’t be happy. I’ll call to discuss.”

All media outlets jumped on the story but Stokes-owned newspaper The West Australian fiercely criticised Palmer in the days that followed, depicting him on front pages as fictional character Dr Evil as well as a cane toad and a cockroach.

Stokes responded on August 14: “Mark, well done. I think no one else could have achieved that legislation in the speed you did. Reckon the insect heads should make a Telethon sales item. The people are with you!”

McGowan responded by describing the front pages as “marvellous” and joking that he thought The West had “gone a bit soft”, before telling Stokes he “appreciated the support enormously”.

On Tuesday, McGowan said he could not recall whether he called Stokes around that time to influence the editorial content of Stokes’ outlets, but wanted help from West Australians as the government tried to push the legislation through an upper house it did not control at the time.

“Look, I don’t recall whether or not I did, but what I’d say is we had to pass legislation through the Legislative Council,” he said.

“Those people who hold Western Australia dear and are proud of our state and love our state, we wanted them to help us to defend the state.

“I had conversations with numerous people, numerous people to try and ensure that we had the best prospect of passing those laws through what was a hostile upper house.”

McGowan said he would “go to his grave” proud of what he did, describing stopping the compensation claim as one of his finest political moments.

Stokes was contacted for comment but has previously told media he did not influence the editorial direction of his media businesses.

During his defamation case judgment, Federal Court Justice Michael Lee said McGowan used the Palmer conflict in 2020 to his political advantage and referred to the text exchange when he said the premier’s reputation may have actually been enhanced.

Lee also said other than McGowan, WA Attorney-General John Quigley, and “possibly” one or two other ministers, no member of the Labor cabinet had any inkling of the anti-Palmer legislation’s existence until it met at 4.15pm on August 11.

“Backbenchers knew nothing of it until Mr Quigley rose to speak at 4.55 pm on that day,” he said.

McGowan hosed down speculation Stokes was given a special heads-up.

He said a range of stakeholders were informed ahead of the bill being introduced, including Barnett, the state opposition, industry associations, Commonwealth MPs and 10 journalists.

On August 11, WAtoday was informed the government was planning to introduce a significant piece of legislation but was not given any detail that it related to Palmer.

The McGowan government’s relationship with Stokes has come under increasing scrutiny.

Just days after the Palmer legislation in 2020 was introduced, McGowan announced a tightening of the state’s gas reservation policy that banned all exports of onshore gas from WA bar one project—the Mitsui and Co and Stokes-backed Beach Energy Waitsia joint venture.

Shares in Beach jumped 6.8 per cent on the day of the announcement, the same day the company posed strong yearly results, which increased the value of Mr Stokes’ stake in the company by about $65 million.

It was later revealed the centre secured $770,000 more in government grants than the $2 million cap that funding rules allowed thanks to two separate grants being awarded to the same project.

The WA government is spending $112 million to remediate and activate the East Perth Power Station which will likely be sold to Stokes and joint venture partner Andrew Forrest for $1.