Usually, ecologists at Deakin University would get reports about a member of public finding the body of a powerful owl no more than once or twice a year.

But since mid-2020, they have been alerted to the bodies of 18 powerful owls – a magnificent, large but threatened owl species that still lives in some parts of urban Melbourne. 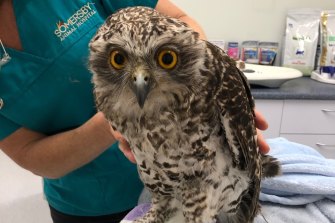 This sick powerful owl is believed to have eaten a poisoned animal.

They were puzzled, said Deakin ecologist Associate Professor John White: “We were worried the owls might have been affected by a disease or being poisoned in some way.”

The scientists were also unsure if greater-than-usual numbers of owls were dying or if, during recent COVID lockdowns, people walking within their five-kilometre radiuses were discovering dead owls that would otherwise have gone unnoticed. 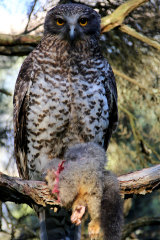 Powerful owls are one of few apex predators that still live, in small numbers, in urban Melbourne. This one is holding a dead brushtail possum.Credit:John White

To their dismay and surprise, the results, now published as a paper in the journal Science of the Total Environment, found 14 of the 18 powerful owls tested positive to anticoagulant rodenticides.

This suggests they are being exposed to rodenticides via accidental or deliberate poisoning of non-target species such as possums, which are eating the rat poison.

“These rodenticides are really problematic because they stay around the body for such a long time,” said Professor White. “They permeate the food chain far wider than people think.”

Anticoagulant poisons have been restricted from general sale in the US, Canada and European Union but can be bought in supermarkets and hardware shops in Australia.

They take a hidden toll because birds of prey can devour many rats and mice that have taken bait and the poison takes some time to work. And the new study shows that possums, a common prey, could eat and spread the long-lasting rodenticides. 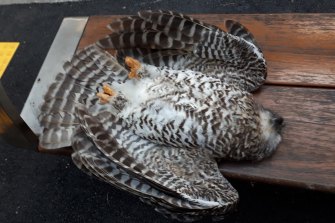 A powerful owl believed to have died after eating prey that had eaten second-generation rodenticides.Credit:Beth Mott

BirdLife Australia, the largest bird advocacy group in the country, has been campaigning against anticoagulant rodenticides for years, and is calling on Australia’s largest hardware chain, Bunnings Warehouse, to stop stocking them.

It will consider which products are available, and if there should be a change to labelling, she said.

“People are not putting these poisons out to be malicious or harm native wildlife, they’re dealing with an unpleasant problem of rodents. But there are other ways to do that.”

Snap and electronic traps are one method to deal with rodents, while first-generation rodenticides do not remain in the food chain for as long, Dr Parson said.

Professor White said ecologists want to raise public awareness that the rat poisons consumers buy and leave around their homes and properties do not only end up in rats.

“Ultimately, we need to think very hard whether second-generation anticoagulants should be available to the public at all,” he said.

Adrian Pearce, Bunnings’ general manager of merchandise, said the hardware chain offered a range of rodent controls and in recent months had been working with suppliers to include additional information on packaging.

The store has updated its website to help customers identify first-generation and second-generation rodenticides, and is separating these rat poison varieties on shelves, he said.