London: Former British prime minister Tony Blair has said the next successful generation of politicians will be those who are able to take back control of the technology revolution from the populists.

Speaking to Alexander Downer, Australia's former foreign minister and now executive chair of the International School of Government at King's College in London at the school's launch, Blair said most of the current generation of politicians and civil servants did not understand technology and therefore feared it. 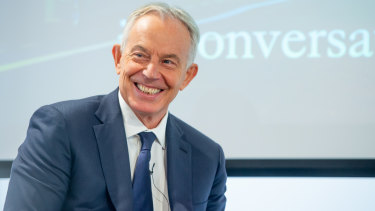 Tony Blair speaking at the launch of the International School of Government at King’s College London on Tuesday.Credit:David Tett

"The world of politics does not really understand the world of change and you have change-makers and policymakers operating separately of each other.

Blair said politicians so far had failed to understand and plan properly for the technological revolution which he said was the modern-day equivalent of the industrial revolution.

"It should be the single most important focus because it is the thing that is changing everything."

"So there's a real risk we're failing to educate today's decision-makers…about technology, how it's changing the world and what we do about it."

He urged technology companies to become involved in the debate or risk being regulated by politicians and said that unless policymakers grasped how to weave technology into future policy it would become a target for populists.

He said this was why technology would be at the heart of the next successful generation of politicians.

"The first group of politicians that take this technological revolution and weave it into a narrative of optimism and refocus politics around how we handle its challenges and access its benefits is going to succeed," he said. 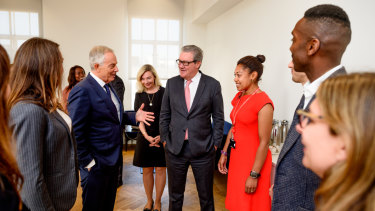 Tony Blair, centre left, was the guest of honour at the opening of the King’s College International School of Government chaired by Alexander Downer, centre right.Credit:David Tett

The pair also warned politicians against using social media as their metric for public opinion, warning it was a platform for political "loudmouths" who had a distorted say in politics, driving major establishment parties in Western countries to their extremes.

Blair said: "Most people don't go around expressing their opinions on in a rude and abusive way but on social media…"

Blair said Brexit was the result of cultural factors that the centre-left had long failed to recognise were equally important to voters as economics. He doubled down on his call for a second referendum, which he hoped would return a result to Remain, overturning the 2016 vote to Leave the European Union.

Without naming US President Donald Trump, Blair said the new breed of politician on social media was "exploiting it and very effectively" but conventional politicians were easily disorientated by the co-ordinated social media campaigns, which could comprise up to 100,000 people.

"I say to them 'is that 100,000 representative of 1 million, 10 million or maybe 150,000? You gotta know that before you shift your policy or think you're misreading the situation," he said.

Blair said his own centre-left side of politics failed to appreciate the importance of cultural identity to voters and had downplayed it, paving the way for populists to capitalise on social divides.

"I think the culture is as important as the economic in how politics is changing," he said.

Blair, who oversaw huge surges in immigration as prime minister, said migration rates were also causing anxiety because people felt their societies were changing. He said this combined with a financial downturn opened up a cultural divide which saw Brexit and the election of Trump.

Blair said the way to respond was to deal with those grievances rather than telling people they can't express their concerns because the alternative was populists exploiting anxiety.

We would have voted for you

Downer wound up the 60-minute conversation by revealing that when he was foreign minister and John Howard was prime minister, they both agreed that if they lived in Britain they would have voted for Blair, who joined Australia and the United States in George W. Bush's war in Iraq.