This is the mesmerising moment a frozen stream thaws below the surface – making it look like there are strange alien creatures swimming beneath the ice.

Children’s author Elizabeth Rose Murray, 43, came across the winter scene while walking near her home in Ireland on January 10.

The weird, but wonderful phenomenon captured in the clip gives the impression of alien creatures moving below the water’s surface.

The otherworldly clip was shared on Twitter where it was viewed over 400,000 times.

Elizabeth, from Glengarriff, West Cork, said: ‘I’d noticed this frozen puddle a few days before when walking, and it was pretty nondescript. 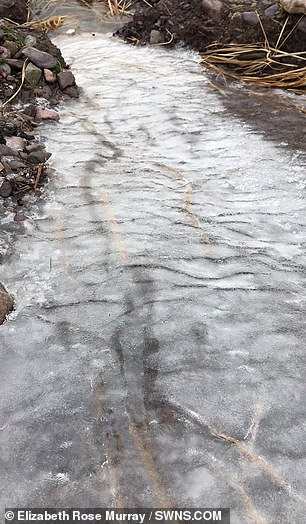 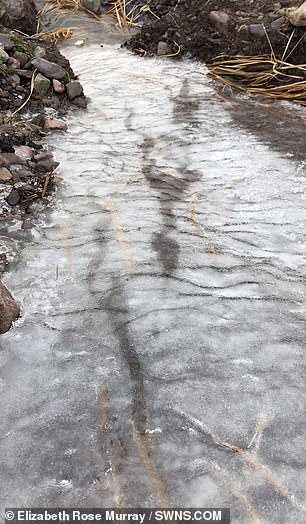 A fascinating video filmed in West Cork, Ireland, shows gently running water beneath the surface of thin ice with trapped air bubbles morphing into shapes underneath as a frozen stream thaws

‘I’d forgotten about it until the eerie sound grabbed my attention. I followed it, not sure what I’d find.

‘I was captivated, and I recorded the video as it’s something I might use in a story. Landscape plays a key role in all my books. My children’s series, ‘The Nine Lives Trilogy’, is largely based in West Cork where I live. 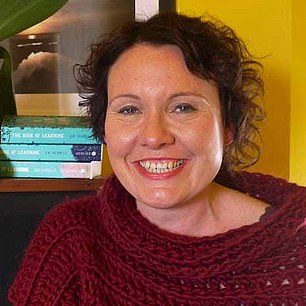 Children’s author Elizabeth Rose Murray, 43, pictured, captured the video on January 10 and shared it on Twitter where it was viewed over 400,000 times

‘So I like to be aware of my surroundings, especially since I live in such a beautiful place and have so much nature on my doorstep.

‘Walking is an integral part of my writing process. Most of my ideas and issue fixes happen while I’m walking and afterwards.

‘My concentration and output improve immensely, so it’s essential that I walk daily. I walk alone and in silence, no headphones or distractions.

‘These times are difficult for everyone, and in different ways, and there’s a lot of fear and negativity out there, which isn’t going to help anyone’s mental health.

‘I think it’s even more important than ever to share images/videos that might bring people some calm or joy.’

What has the Mayan calendar predicted about the end of the world? – The Sun

Who is Madison Bell? What to know about the Ohio teen who ‘chose to disappear to start a new life’ – The Sun