Britain braces for Spring STORM: Met Office issues weather warning for the south with 60mph winds and a month’s worth of rain set to batter UK from tonight

Britons were today warned to brace for wild late spring weather blowing in – with 60mph winds expected from tonight along with a month’s worth of rain.

The Met Office has issued a 27-hour weather warning for southern England and South Wales from 6pm tonight until 9pm tomorrow as the ‘unusually deep area of low pressure for the time of year’ moves eastwards.

The deluge will be accompanied by very strong winds before the low pressure system crossing the country is expected to head out into the North Sea tomorrow night, leaving showers for the weekend.

Forecasters have urged homeowners to tie down outdoor furniture amid concern that temporary structures could be affected, such as marquees set up as Covid vaccination centres and pergolas in pub beer gardens.

Unsettled conditions will continue through the weekend, but there is a sign of drier conditions to come from next Tuesday – with temperatures expected to starting to climb towards more typical average for the time of year. 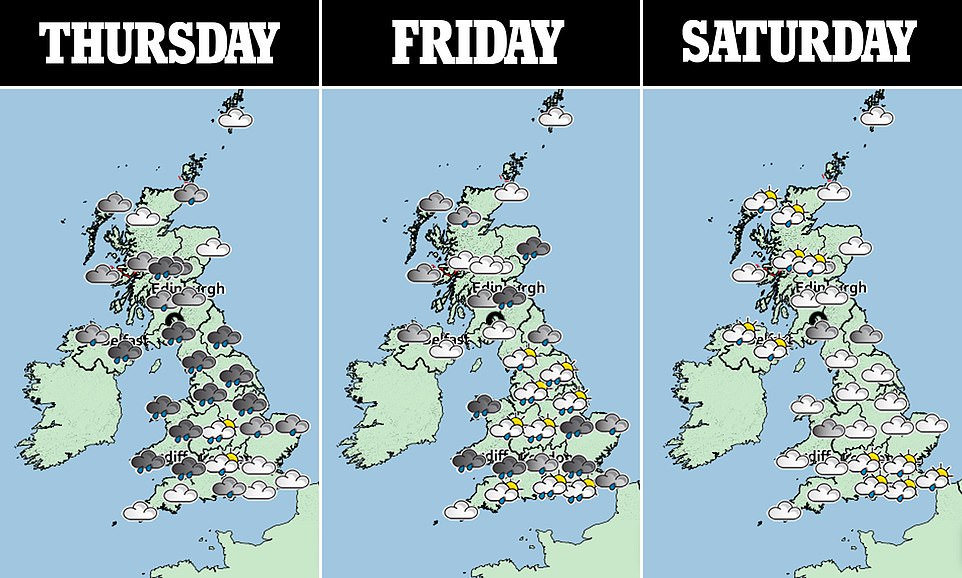 Met Office chief meteorologist Dan Suri said: ‘The low pressure system moving in from the west is going to bring some heavy rain across much of the UK from Thursday and into Friday.

‘With wind looking to be strongest in southern coastal areas, including south Wales, there’s a chance of some disruption to travel plans and potential damage to temporary structures, such as tents and marquees.’

He added that conditions are set to improve after the start of next week. This spell of weather will probably keep nights cooler than the long-term average, but bring warmer days compared to those seen in recent weeks.

Mr Suri said: ‘There are some glimmers of hope in the forecast into next week, with more settled weather possible from Tuesday. In areas of prolonged sunshine, we should be seeing some quite pleasant conditions, but night temperatures will continue to stay stubbornly low.’

From 6pm tonight, the Met Office said winds could gust at speeds of up to 60mph along coasts and on high ground, while maximum speeds of 50mph are expected inland and at lower levels. 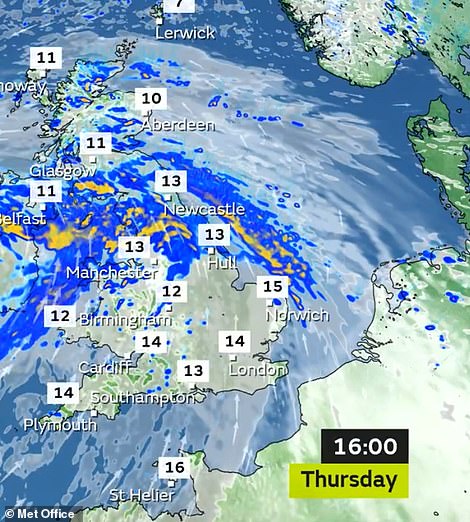 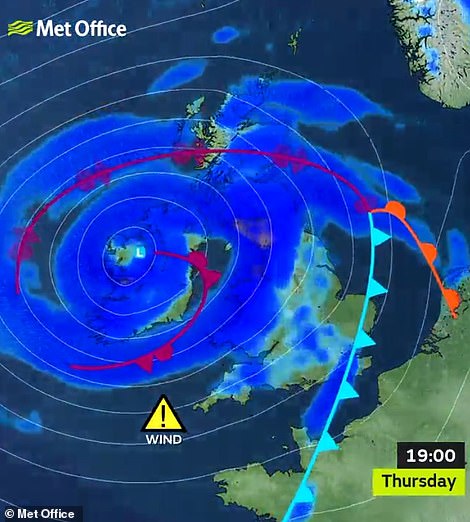 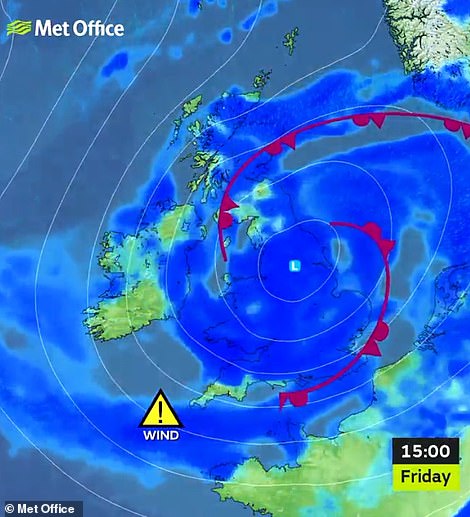 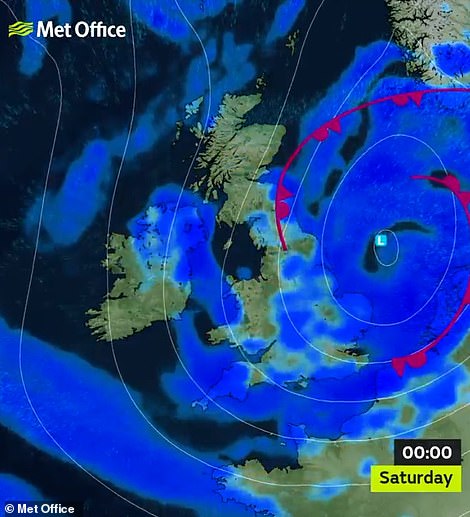 Meanwhile, up to 70mm (2.8in) of rain is set to fall – the normal average for the entire month – with Wales and Northern England set to be the wettest areas.

The Met Office is warning of travel disruption, a risk tree of branches being toppled by the winds and a danger of temporary structures such as outdoor gazebos being blown away.

Its meteorologist Craig Snell said: ‘[At] this time of year, with the trees in full leaf, it could potentially bring some small branches down and because there’s a lot more outdoor furniture, we advise people that it is a bit vulnerable to strong winds and to tie it down.’

The Met Office said in its warning for tonight: ‘An unusually deep area of low pressure for the time of year will move slowly eastwards across a central swathe of the UK during Thursday night and Friday.

‘In addition to some heavy rain, this low will bring with it a spell of relatively high winds. The windiest conditions will start to affect south Wales and southwest England Thursday late afternoon and evening before spreading across southern England Thursday night and early Friday. 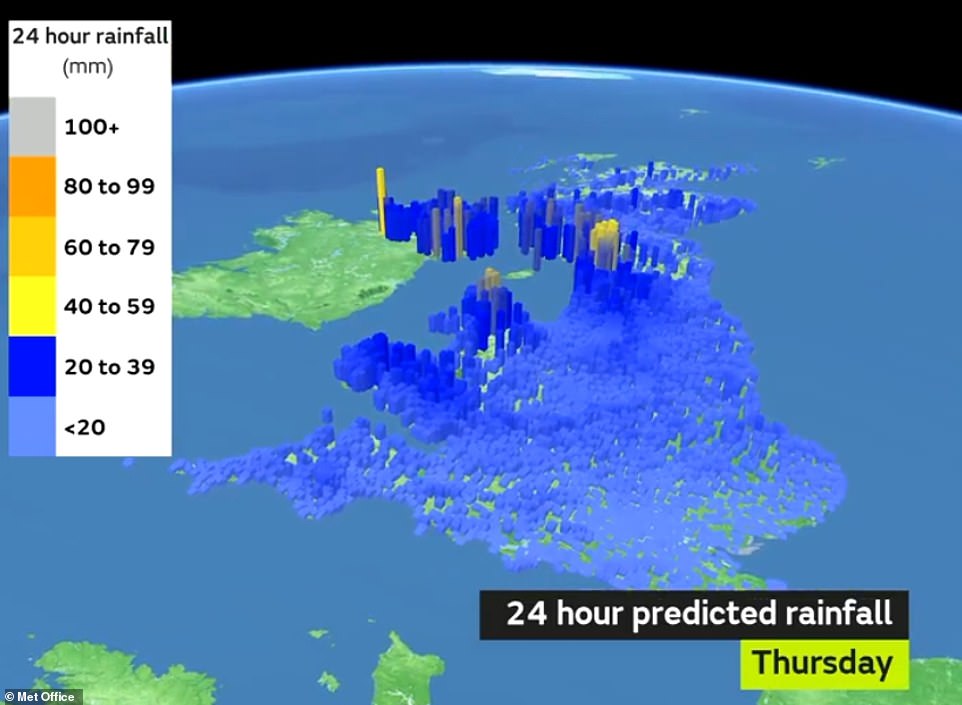 ‘Inland, gusts up to 45 to 50mph are expected at times whilst over coasts and hills gusts will reach as much as 55 to 60mph. These high winds then slowly ease from the west later on Friday.

In Scotland, the strong winds could affect ferry crossings on the West Coast – and the Met Office says as much as 60mm (2in) of rain could fall in southern Scotland in the 24 hours from later this afternoon.

This month’s miserable weather means it could be on course to beat the record for the wettest May, dating back to 1967, when 131.7mm (5.2in) of rain fell across the UK.

At the beginning of the week, it was revealed that Britain had already received 102 per cent of the rain expected for the month, with 71mm (2.8in) falling on average.

More heavy rain and even hail fell on Tuesday, with another 16mm (0.6in) recorded over 12 hours in Goudhurst, Kent. Photographs showed hail falling so hard in London that the ground looked like it was covered in snow.

Who are Scott and Amy Lowe? The Iowa couple killed in a plane crash at Osage Beach, Missouri

Biden laughs at Trump's claim that he's the 'LEAST racist'