Dennis the even BIGGER Menace! Met Office RAISES threat levels of 1,200-mile wide storm on warpath to Britain this weekend when 75mph winds and rain will cause fast-flowing floods and transport chaos

The Met Office has raised the threat levels of 1,200-mile wide Storm Dennis that is on a warpath to Britain this weekend with winds and rain set to cause fast-flowing floods and transport chaos.

The country is set to be lashed with a further downpour today and more snow, before the storm dubbed Dennis the Menace is set to cause havoc on Saturday and Sunday, as parts of the country still struggle to recover from flooding caused by Storm Ciara.

Storm Dennis will develop in the North Atlantic before tracking eastwards, and passing into north Scotland on Saturday, with the country set to be blasted by winds over 60mph, and some areas getting more than 100mm of rain.

Severe amber weather warnings have already been issued for many parts of the UK this weekend, including amber warnings for rain in south west England, southern Wales, north west England and south east England.

Heavy rain is also expected and with already saturated ground, there is a risk of further flooding in areas that have already suffered from the consequences of Storm Ciara this week.

Paul Gundersen, Chief Meteorologist at the Met Office said: ‘Another spell of very wet and windy ​weather is expected for Saturday. Although Storm Dennis is currently not expected to be as severe as Ciara, disruption is still likely.’ 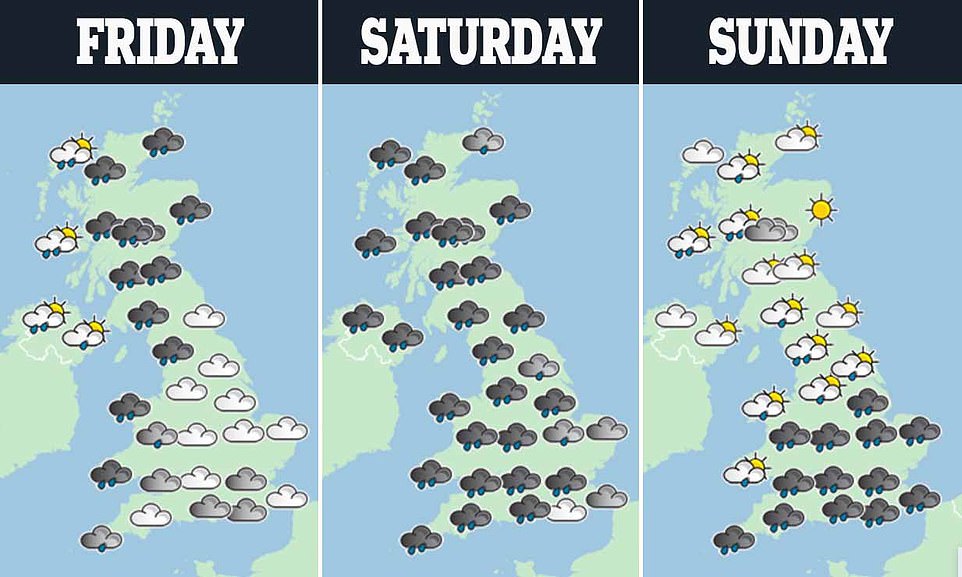 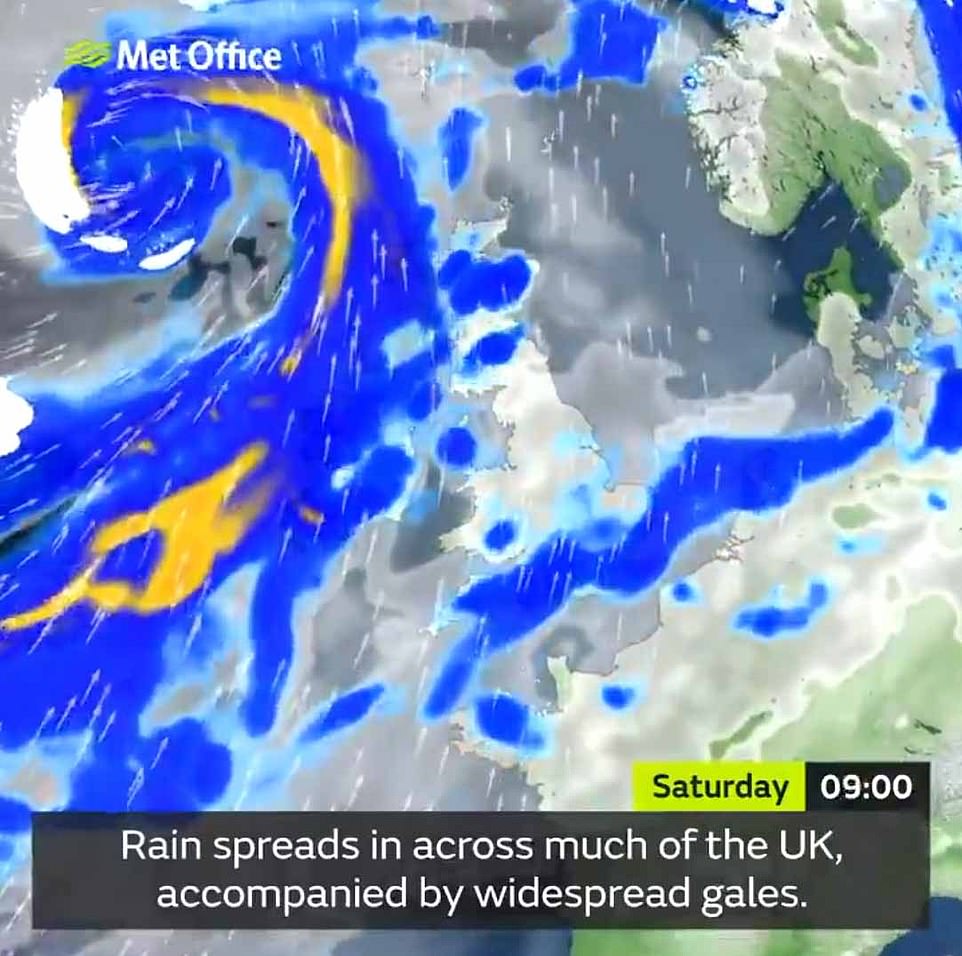 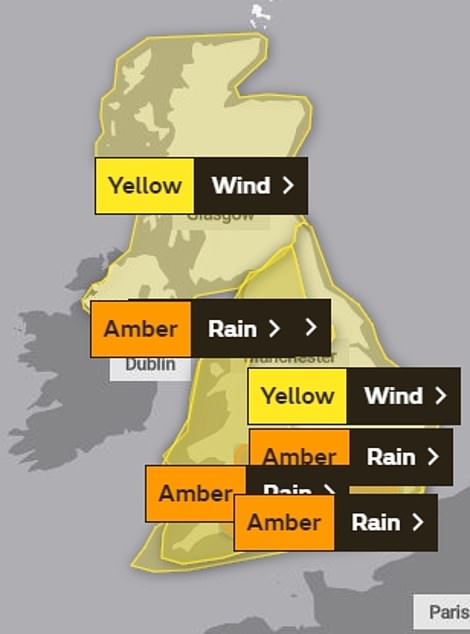 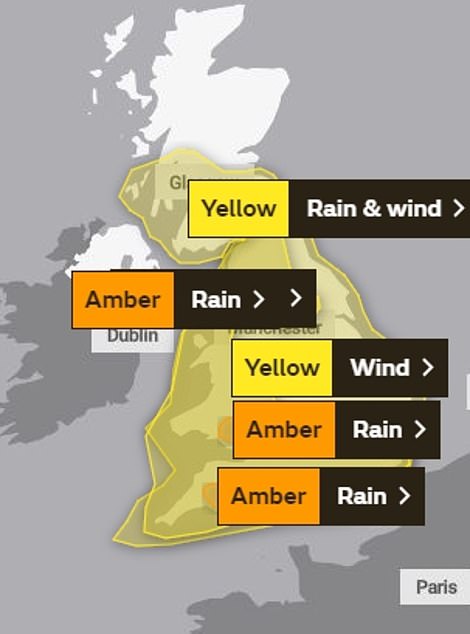 Severe amber weather warnings have already been issued for many parts of the UK this weekend, including amber warnings for rain in south west England, southern Wales, north west England and south east England

A dramatic this week showed a workman knocked over by a sheet of plywood which was picked up by gale-force winds and flung at his head as the UK braces itself for a more severe storm at the weekend Ben Newberry was struck on the neck and laid flat out on the ground by the impact in Leicestershire.

After being put in a neck brace by an ambulance crew and checked over at hospital the builder was given the all-clear.

Ben was taking a coffee break while working in a housing estate in Syston on Tuesday – as wind speeds topped at 80mph – when the drama unfolded. Video shows a sheet of ply, 4ft by 4ft and weighing at least 20lbs (9kg), take off as a gust of wind strikes.

The footage emerged as the UK is warned to brace itself for a storm dubbed Dennis the Menace that’s set to cause further havoc on Saturday and over the weekend, as parts of the country struggle to recover from flooding caused by Storm Ciara.

The video shows the wood reaching head height as it strikes a totally unsuspecting Ben and flattens him. There is an audible clunk as the ply connects with Ben.

His shocked colleagues can then be seen checking on him before the video cuts out.

A later picture shows Ben lying on a hospital bed in a neck brace.

Speaking today Ben said: ‘They were a bit worried so they took me to hospital because I couldn’t remember anything. But I’m fine now. ‘It hit me on the neck, just knocked me out for a couple of seconds. No damage done. ‘It was just on a job and there was a floor laying firm there too. Unfortunately the wind got up and picked the ply up, came across and knocked me out.’ 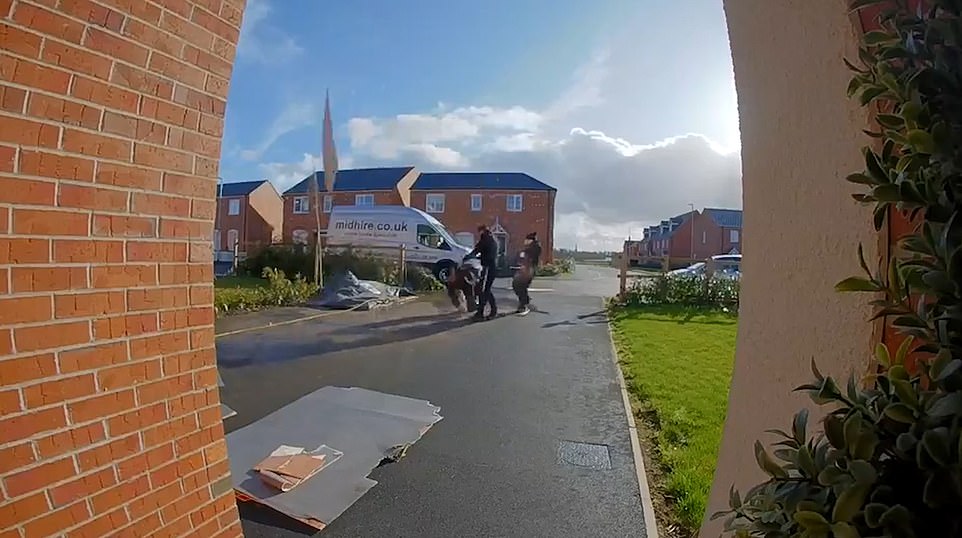 Video shows a sheet of ply, 4ft by 4ft and weighing at least 20lbs (9kg), take off as a gust of wind strikes, hitting Ben Newberry in the head 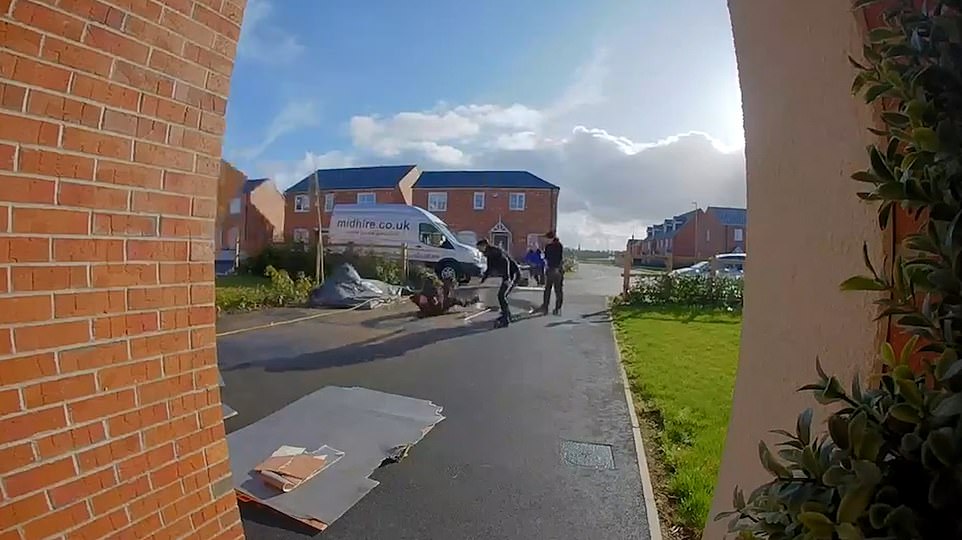 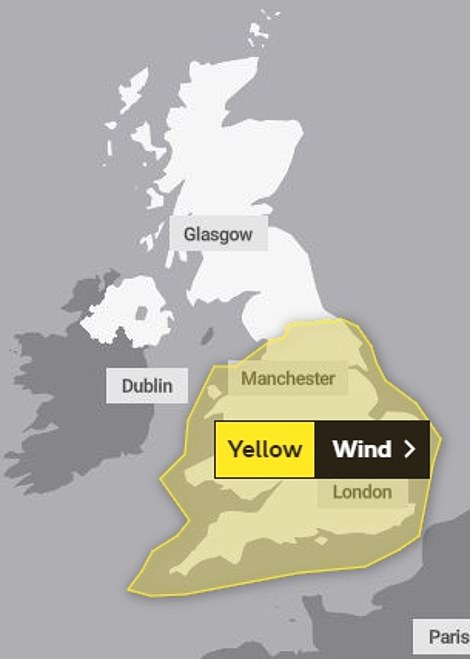 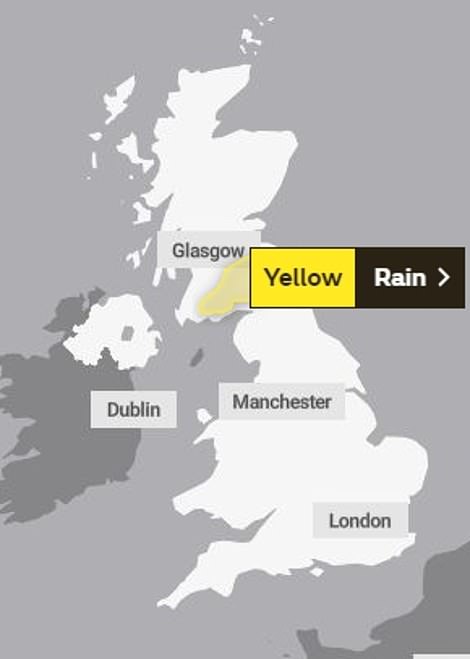 Storm Dennis will bring wind and rain on Saturday. It is tipped to bring worse rain problems than Storm Ciara

@smiddy_lcfc123 wrote under Ben’s post writing: ‘F****** properly stacked it and all.’ @marcobutts added: ‘The noise it makes when it hits your head, priceless’. @SPalmtree91 commented: ‘F***** hell dad’. @lukepreston_ said: ‘Class’. @mad_hazz commented: ‘I’ve watched this at least 35 times today and it gets funnier every single time’.

The effects of Storm Ciara, that hit the UK at the weekend leaving more than 20,000 homes without power continued to wreak havoc into the working week.

Four people died during the storm– a 58-year-old man, whose car was hit by a tree on the A33 in Hampshire on Sunday, a 50-year-old man who got into difficulties while with a diving party off the west coast of Scotland near Oban, and a 77-year-old man who fell in icy conditions in Clydebank, West Dunbartonshire. On Tuesday, a dog walker in his sixties was killed after being hit by a falling tree in Black Wood, Liverpool. 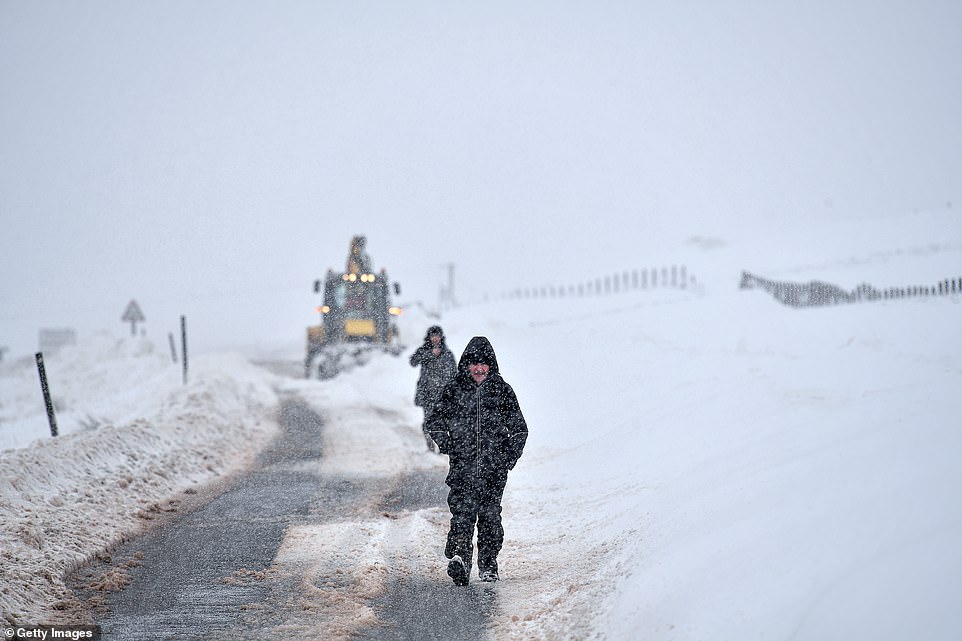 A man and woman walk along the B797 as a digger clears drifting snow on February 12, 2020 on Wanlockhead, Scotland 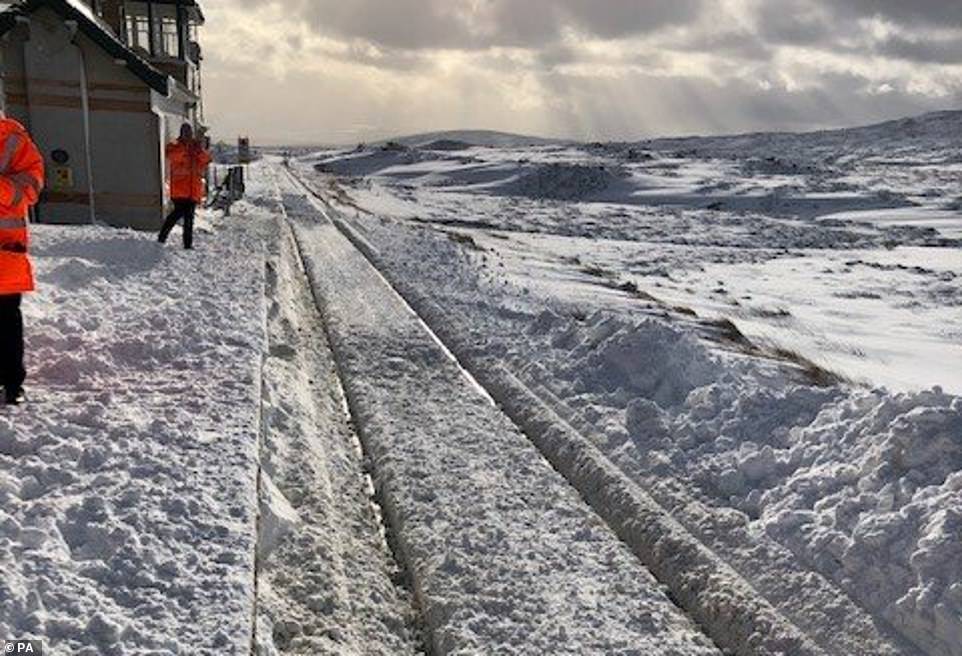 Photo taken from the Twitter feed of @NetworkRailSCOT of rail teams clearing snow at Corrour station near Loch Ossian, on the West Highland Line in Scotland

Storm Dennis is set to bring more severe weather to the UK this weekend.

Dennis verges on the most powerful North Atlantic storm since records began 196 years ago.

There’s warnings that fast flowing or deep floodwater is likely, leading to threats to homes and businesses with a good chance communities will be cut off by flooded roads.

Four separate amber warnings are in place on Sunday – two which cover the south of England, one for south Wales and another in the north west of England.

Saturday is set to be the most hazardous day.

The system will develop in the North Atlantic before moving eastwards over the next few days and then hitting the country on Saturday with strong gusts of over 60mph, and heavy rain on the already saturated ground, so there is a further risk of flooding. 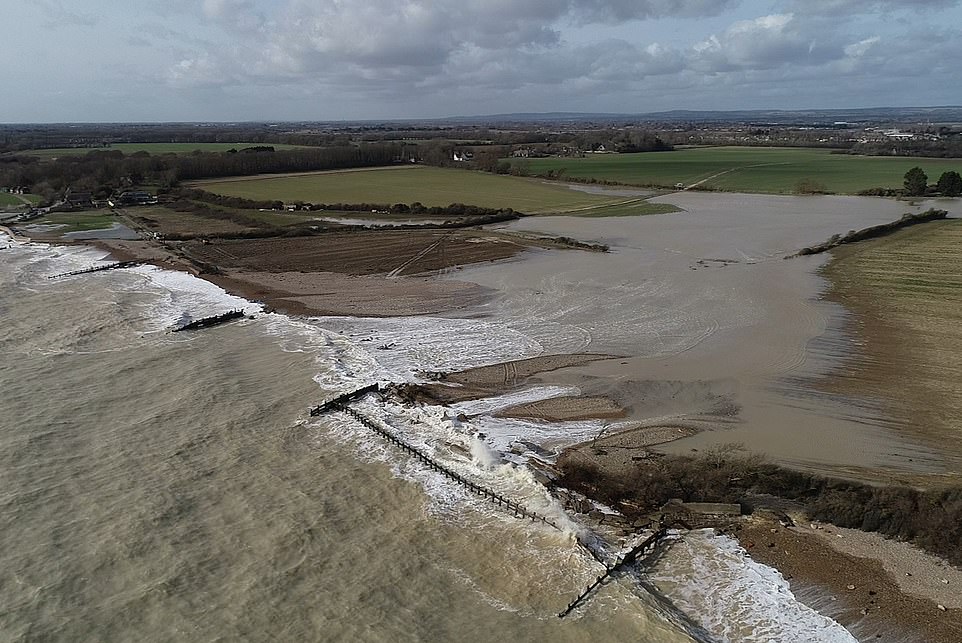 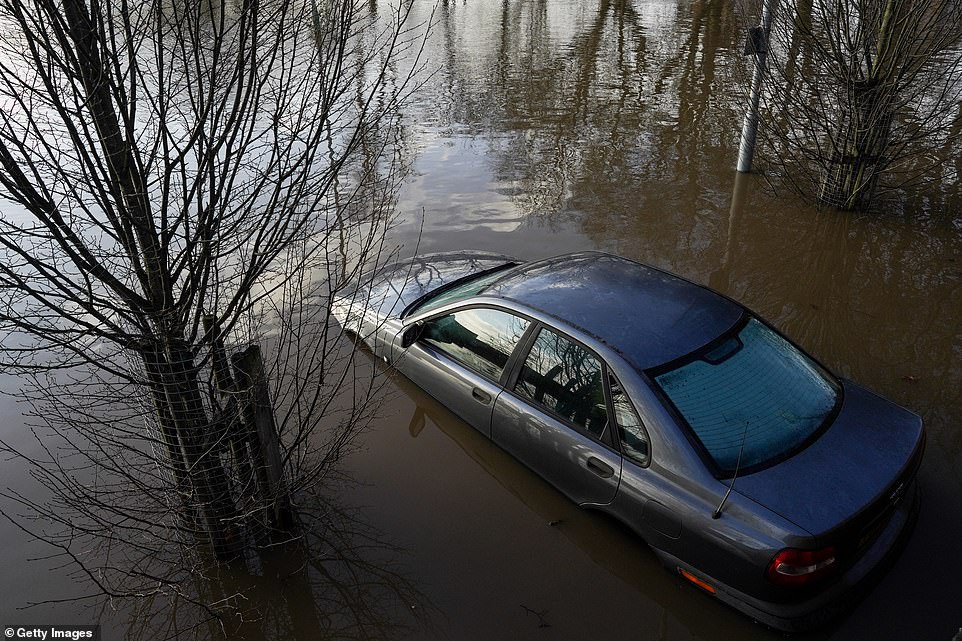 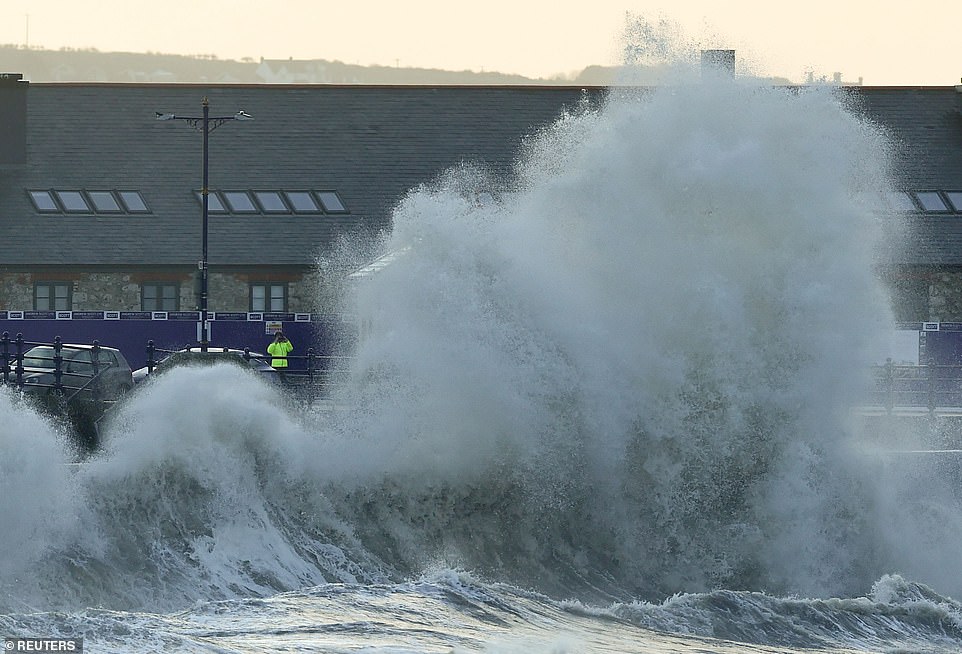 Waves crash over the promenade at Porthcawl, South Wales, as strong gales continued to blow today

The RAC reported its busiest days for a year, with call-outs up 20 per cent at up to 8,500-a-day this week. ‘There’s no respite with storms and snow – and more motorists will be impacted by Dennis than Ciara, as Dennis hits on Saturday rather than Sunday as Ciara did, when fewer people travel,’ said RAC spokesman Simon Williams.

Further north, there were snow flurries in Alston, County Durham, and Nenthead, Cumbria, as well as up to two inches on surrounding fells.

Hundreds of trains face being cancelled or severely delayed at the weekend, after 3,500 – 27 per cent of the UK’s train services – were axed or very late on Sunday during Ciara, Network Rail data showed.

Dozens more flights face being cut, after over 1,000 were cancelled due to Storm Ciara, FlightRadar24 data showed, with Heathrow alone cancelling 472 flights and Gatwick 333.

US hiring slows as employers added only 75,000 jobs in May

Justin Trudeau in Winnipeg on Tuesday to talk transit